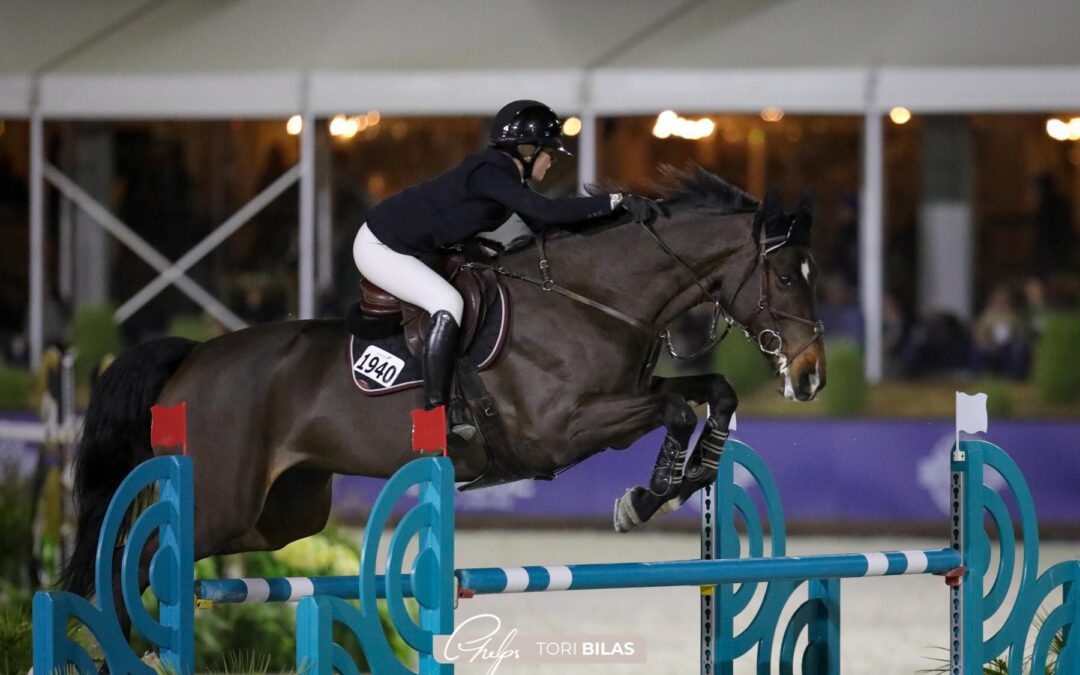 Thermal, Calif. – January 29, 2022 – Saturday’s highlight class began as the sun was setting in the desert and the crowd gathered to watch athletes compete in the $25,000 FarmVet Grand Prix. A total of 41 entries came forward to test the track set by Mexico’s Manuel Esparza. Out of the eight horse-and-athlete combinations to jump a clear first round and advance to the jump-off, it was the United States’ 17-year-old Zoe Brown who secured her first grand prix win with the quickest double-clear effort riding Cate Tomlinson’s Laviata. 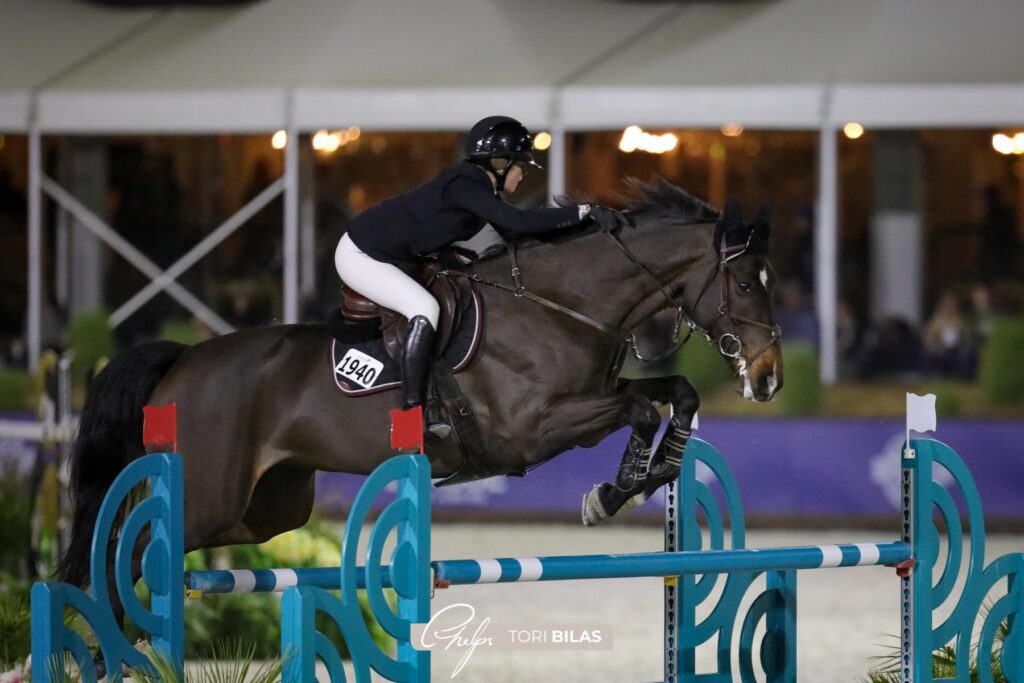 The course included an oxer-vertical double combination, a vertical-vertical-oxer triple combination followed by a wide triple bar oxer, and an airy liverpool vertical. Riders struggled with several elements across the course, with three electing to retire and two suffering elimination. Karrie Rufer (USA) and Mr. Europe were the pathfinding pair for the first round as the sixth duo to contest Esparaza’s track. Brazil’s Cassio Rivetti navigated the second clear effort just one round later aboard Chappuis 14, guaranteeing the crowd an exciting jump-off later in the evening. Bruno Diniz Das Neves (POR), Connor Swail (IRL), Simon Schroeder (GER), Zoe Brown (USA), Elisa Broz (USA) and Susan Artes (USA) would also add their names to the jump-off list by the conclusion of the first round. Taking to the seven-effort jump off track first, Rufer suffered a rail mid-course to finish on four faults in a time of 35.543 seconds. Rivetti and Chappuis 14 were next in the arena, laying it all on the line to ride away with the first double-clear effort of the night. The pair crossed through the timers in a swift 32.931 seconds to set the standard high for the remaining six horse-and-athlete combinations. Diniz Das Neves suffered the same four-fault fate aboard Adele XIII, immediately followed by a clear from Swail. Though Swail piloted Errol to a clean finish, the pair was not quite fast enough to unseat Rivetti, notching a time of 33.785 seconds to move into the second place position. In the arena next, Schroeder navigated a safe, four-fault effort aboard Stakki, leaving the door of opportunity open for Brown, who entered the Grand Prix Arena next riding Laviata. Brown and the 11-year-old Oldenburg mare gave the crowd something to cheer about as they sliced and diced their way through the track to shave nine-tenths of a second off of Rivetti’s leading time, narrowly moving into the top position. Though the remaining athletes, Broz and Artes, would put forth a valiant effort, they could not match Brown’s impressive performance, ultimately lending the first place honors to Brown and Laviata. Broz’s double-clear effort with Tinkerbell, owned by Constance Broz, would be good enough to earn second place, with Rivetti rounding out the top three aboard Shelly Stull’s Chappuis 14. In addition to achieving her first grand prix win Saturday evening, Brown also walked away with the $1,000 Equifit U25 Classic award for being the highest placed rider under the age of 25. International competition returned to the Grand Prix Arena Saturday afternoon with the $37,000 Sun Air Jets 1.45m Classic CSI3*. Twenty-four horse-and-athlete combinations vied for the top spot in the jump-off format class, but top honors went to Shawn Casady (USA) and RMF Chacco Top, owned by Rushy Marsh Farm, LLC, for their double-clear effort and a time of 41.02 seconds. As fourth in the set order of go, Casady held the lead as the sole clear round for the majority of the class until Canada’s Brian Morton and Crusador Z made it two clear rounds as the twenty-first pair in the ring. Mavis Spencer (USA) with Georgy Maskrey-Segesman’s Con Calle and Vanessa Mannix (CAN) with Catinka 24 made it a total of four for the jump-off. All four pulled off double-clear efforts, but in the end it was Casady with the 13-year-old Hanoverian stallion who sealed the deal by over one second to claim the win. 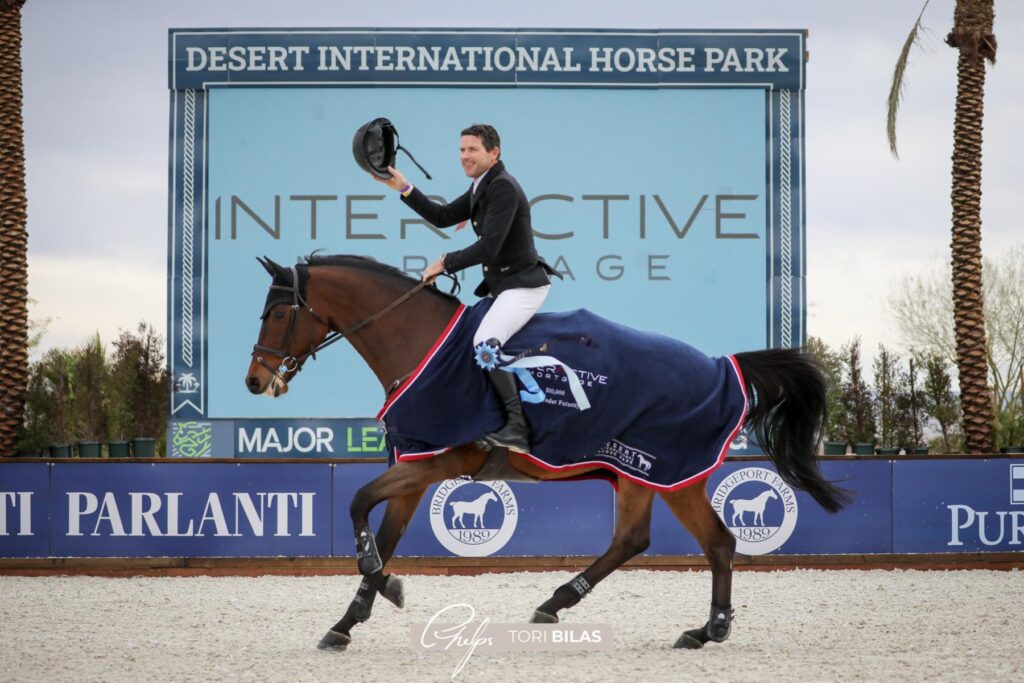 Earlier in the day, athletes entered their younger mounts in the $10,000 Interactive Mortgage 10 & Under Futurity Series, which was topped by Ireland’s Connor Swail and Like About You, owned by Morning Star Sporthorses, LLC. The class, set in the Table II 2b format, allowed horses aged 10 and under to compete over a track set at 1.35m that featured a triple-bar, an oxer-vertical-vertical triple combination, and a vertical-oxer double combination. The class serves as an opportunity for owners and riders to give their top young horses valuable experience and impressive prize money.

While 14 combinations jumped the first round clear, it was Conor Swail and Like About You as the final entry on course who took the win in a double-clear round with a jump-off time of 38.055 seconds. Just behind Swail in 38.096 seconds was Eric Navet and Coronado Blue NF, owned by Signe Otsby, and Ali Ramsay rounded out the top three with Conrado 12, owned by David Sport Horses, Inc., in 38.374 seconds. The class always proves competitive, but this week’s class had the top five finishers all within a half a second on the clock. On the jump-off:
“I started off with a nice vertical and I got my gallop in the turn. The first part of the course was a little twisty so I made sure to turn up as tight as I possibly could. After the combination, I really started going for it. [Laviata] has a big stride and she’s super fast so I just let her have fun.”

On Laviata:
“She’s an 11-year-old mare. She’s owned by Cate and Kelli Tomlinson, two of my dad, Harley Brown’s clients. They’re generously letting me ride her for the circuit. I’m super thankful. I’ve been riding her since November. We showed at Sunshine Series in November and then we took a little break off and this is our first week back. She gives me a lot of confidence which is obviously very helpful because I’m a little inexperienced. I was just expecting to have a nice round. I didn’t think I would have a clear but when I did I was super happy. In the barn she’s a little bit mare-ish. She kind of likes to keep to herself. I enjoy being around her as much as she lets me. She’s super nice to flat. Overall, she’s just a really sweet mare. I was able to watch Cate, her owner, ride her for six months so I was able to kind of watch on the ground. So when I got on her, I kind of felt like I had already ridden her a few times. On her plan for rest of circuit:
“To stick to these Grand Prixs and to be consistent so that hopefully we can pull out another good placing.”

On the jump-off:
“I had to go first. The first few jumps are kind of an awkward line, you couldn’t get too quick over to number six because it didn’t really put you on a good line to number 14 so I didn’t get too greedy there. Then he was really quick on the right turn to 14. I had to go inside to the liverpool which was tight and I did hit my ankle on the standard but stayed up and then I was able to get pretty quick back on the vertical. Not as quick as I’d love but it allowed me to make a turn back on the double and then just nice to the last and we won! I’m really lucky to have [RMF Chacco Top] and the team behind it. I’m really excited.” On his partnership with RMF Chacco Top:
“I grew up with Ashland Farms and they had him with Cormac Hanley. When he moved on they were trying to figure out what to do with the horse and I had a couple of their other horses out here with some farms that I work for and one thing led to another and one he’s out here with me. He’s 13 years old this year, he has experience, he knows what he’s doing, he is competitive and you can tell. I don’t know him that well yet but I can tell that he loves winning. I believe he arrived between Christmas and the new year so I had two weeks at home in Santa Barbara to spend some time with him and take him up riding around the groves and working in the arena with him. Just taking my time, not getting too crazy, just starting over some little jumps, took him out hacking, really just worked on creating a friendship. He’s steady, he knows what he’s got. He is very polite about it, he’s not obnoxious.

On the shift in his training:
“Right now I’ve been really focusing on having quality, but also really working on my own technique. I’ve always been natural and athletic enough to do it and now my focus is refining. I think good horses thrive off of that and good horses create good riders. That’s my mindset. Right now I have the opportunity with people who have similar goals that I have with my riding, and ‘What do you want to do?’ has never been asked of me before. It’s always been, ‘Get on this horse, and get a result.’ Now I have the opportunity to create my own system, create my own program and create my own goals. That’s where I wanted to go because I don’t want to be good, I want to be the best. I’ve always known where I wanted to go and I’ve always had the end goal in my sights, and I think just every day believing in that, you end up attracting the right people. My end goal is to become the best rider that I can be but also the best horseman. I want to go as far as I can in the sport of show jumping but without ever sacrificing my morals as a horseman.”

On the Desert International Horse Park venue:
“I don’t think I’ve ever ridden in a better arena. The job they did with the footing, and even the atmosphere is incredible. The lighting is top, the ground is top, the jumps are top, and it adds to your motivation to get out there and do it. They’ve done such a good job. What I’ve always loved about this place is that it’s always had space, and circuits are hard on horses. Here you can keep them fresh, you can ride them out. At a lot of horses they get a lot of horses there and there is nowhere to ride, everyone is on top of each other. But here, you can really do your own thing and put the horses first which I really love.”