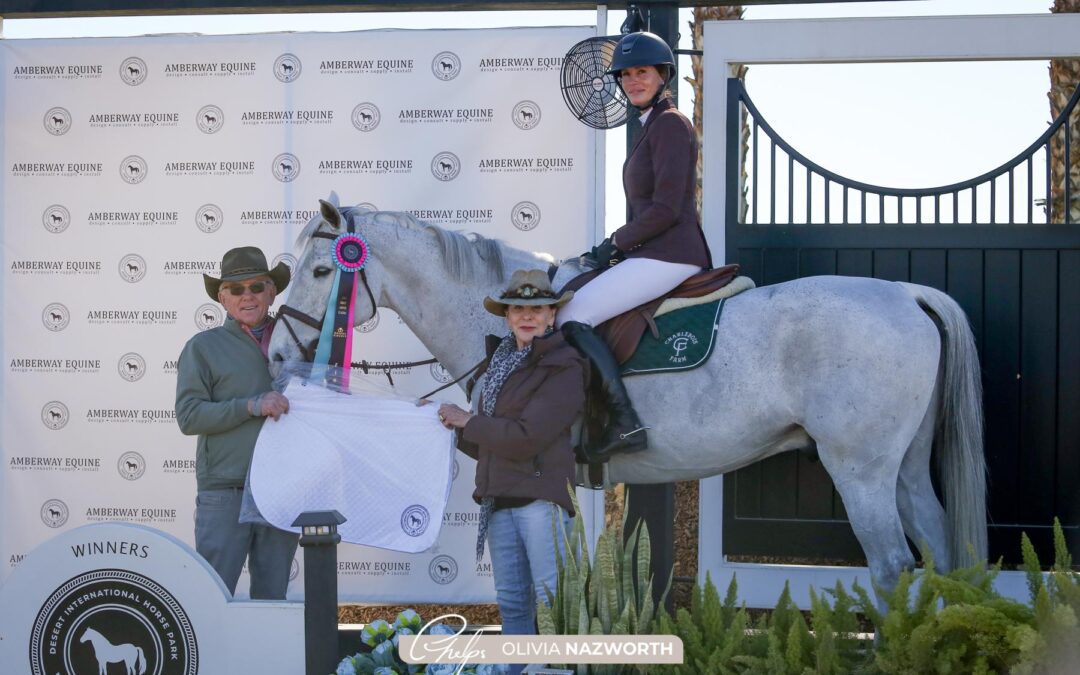 In a brand new series, Desert International Horse Park will feature the winner of a weekly class during each of the remaining weeks of Desert Circuit. First up is the winner of the $1,500 NAL Adult Amateur Jumper Classic 1.15m, sponsored by Tack Warehouse, Ashley Fey of Menlo Park, CA. Fey won the class out of 40 entries aboard her mount Castiello, a 10-year-old Holsteiner gelding. Get to know Ashley below! DIHP: How did you get into riding?

Ashley: “I was 10 years old and I grew up in the California hills. I just loved ponies. It was one of those things. I had a pony named Popcorn, and he was my first horse. It just evolved from there. I got really good pretty young. I just had those good fundamentals of riding. That was really the start of it.”

DIHP: What makes horses so special to you?

Ashley: “Their sensitivity, their intuition, and they are just so kind. They kind of mirror to you what’s going on. I think if you pay attention to that, there’s such an opportunity for an amazing relationship.”

DIHP: What is your best memory that you have while riding?

Ashley: “Even as an adult rider, coming back to this later in my thirties and having a long break in my twenties and thirties, coming back and being able to excel and move up in divisions and be consistent and do well. I’ve really been clawing my way to the top this last year and never really thought I’d be in the 1.10m. Here I am, I won my classic! My trainer was just saying the importance of consistency, riding with pace, and trusting your horse.” 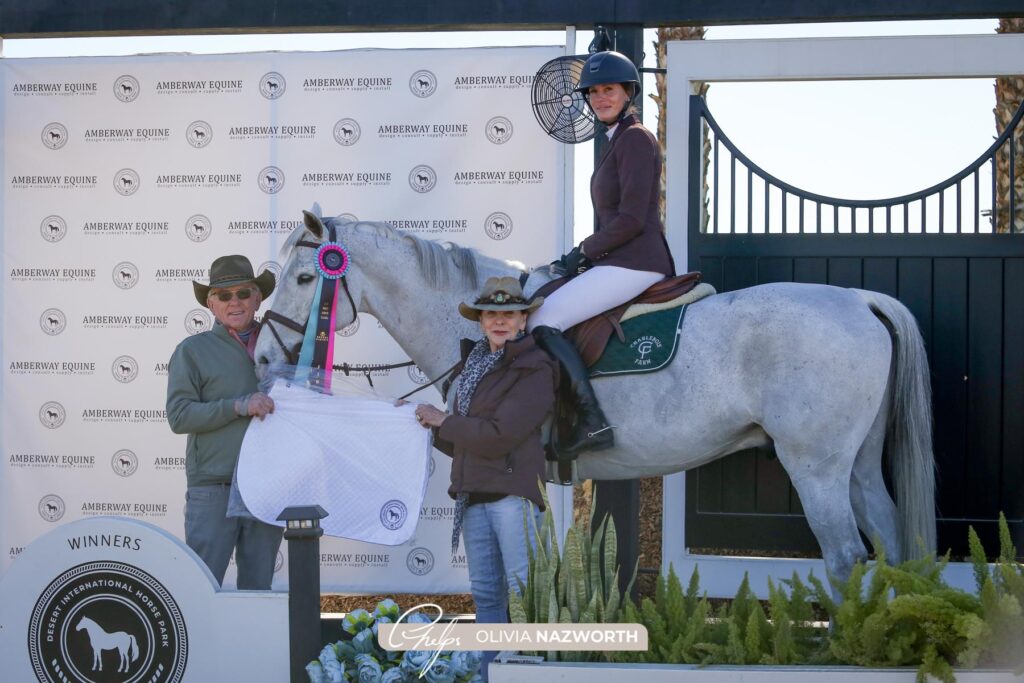 DIHP: Tell us about your horse and what you compete in:

Ashley: “My horse’s name is Castiello. He’s an 11-year-old Holsteiner. He is so kind, so forgiving and has amazing scope. If I have the right canter, I can really get to anything with the proper distance. I’m competing in the 1.10 Adult Amateur Jumpers right now. I hope to move up to the 1.20m someday. And we’ll see how that goes; it’s going in a good direction right now though. I’m just really happy with it.”

Ashley: “At first, I was a little intimidated. It’s a big deal here on the West Coast. I kind of settled last March in 2021; it was my first year here. As the weeks went on, I just got more and more comfortable. Coming back in November for the Sunshine Series was a huge success. Then being here, this will be my second week here, and we’ll be here next week and three weeks in March. You learn so much from the competition that it’s just an amazing opportunity for growth.”

DIHP: What is your biggest accomplishment while riding?

Ashley: “My instinct is to say, ‘Oh I won my division’ or ‘I won the classic.’ But that’s not it. I think it’s that continued relationship with my horse and that just seems to get better and better. I just want to continue to work on that. It’s trusting that pace and knowing that he’ll take care of me if I do make a mistake. I’m just working on that trust level and getting more advanced in my turns and all those kinds of things that make you quicker in the jumper ring. It’s consistently a work in progress. This is the most humbling sport I’ve ever done in my life. One day you think you’ve got it, but the next day it’s like ‘Hey, pay attention!’ There’s always something to work on. I like that about it.”

DIHP: What are you doing outside of riding?

Ashley: “I work with teenagers; I counsel kids. I have a business called ‘Teen Rising Project’ up in the Bay Area where I’m a mentor, problem solver, and a kind of liaison between parents, kids, coaches, and teachers. I help them bridge the gap of communication and stuff like that. It’s challenging and it’s really rewarding too. It’s amazing. I hope to tie in the horses with that too. I’ve done a lot of equine therapy in the past, and that’s always a huge tool. The kids love the horses. It’s really fun.”