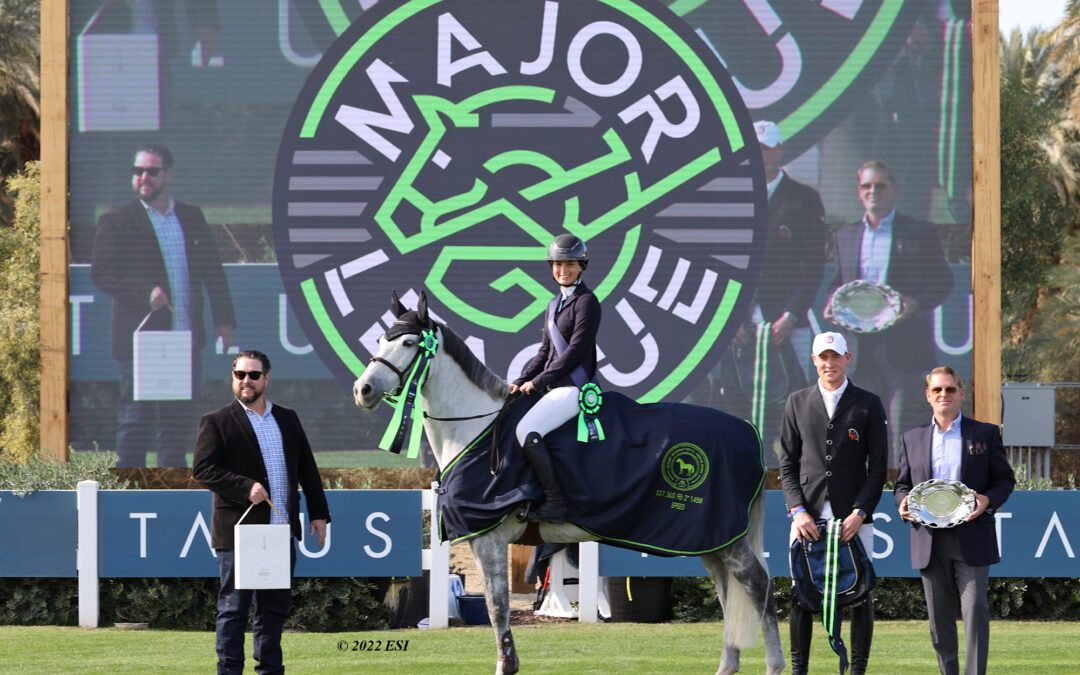 Tanimara Macari (MEX) put her trust in her horses on Thursday of Desert Holiday I and it paid off.

The 23-year-old rider, competing along the Major League Show Jumping Tour, was on fire to take the win in both the CSI2* and CSI5* classes on the grass during her first visit to Desert International Horse Park (DIHP). She started her day with a victory in the $37,300 Gillibrand Sand CSI2* 1.45m Speed aboard Cordelia GP Z, followed by a repeat success aboard IB Chica in the CSI5* Amberway Equine 1.40m Two Phase. To start out the day, Macari took top call out of 50 international entries aboard Cordelia GP Z, a 10-year-old Zangersheide mare owned by Eickendorf Horses and Tal Milstein Stables. Over Michel Vaillancourt’s (CAN) track, speed was the name of the game, and it was a game Macari played well, clocking in at 65.14 seconds for the win. The race was close at the top, however, as the United States’ Kyle King and Sig Chiari, owned by SIG International, took second place in 65.19 seconds. Daniel Coyle (IRL) and Ariel Grange’s Jeffrey Jarden claimed third in 66.62 seconds.

“From the first time I sat on her, I thought she was a winner,” Macari said of Cordelia GP Z. “I tried her when we were in Belgium and she had a spark behind her and she just wanted to go. She is actually very chill, as you saw when she was coming out of the prizegiving. She has a little bit of a quirky attitude when she’s at the show, which helps. When she goes in the ring she wants to win.” 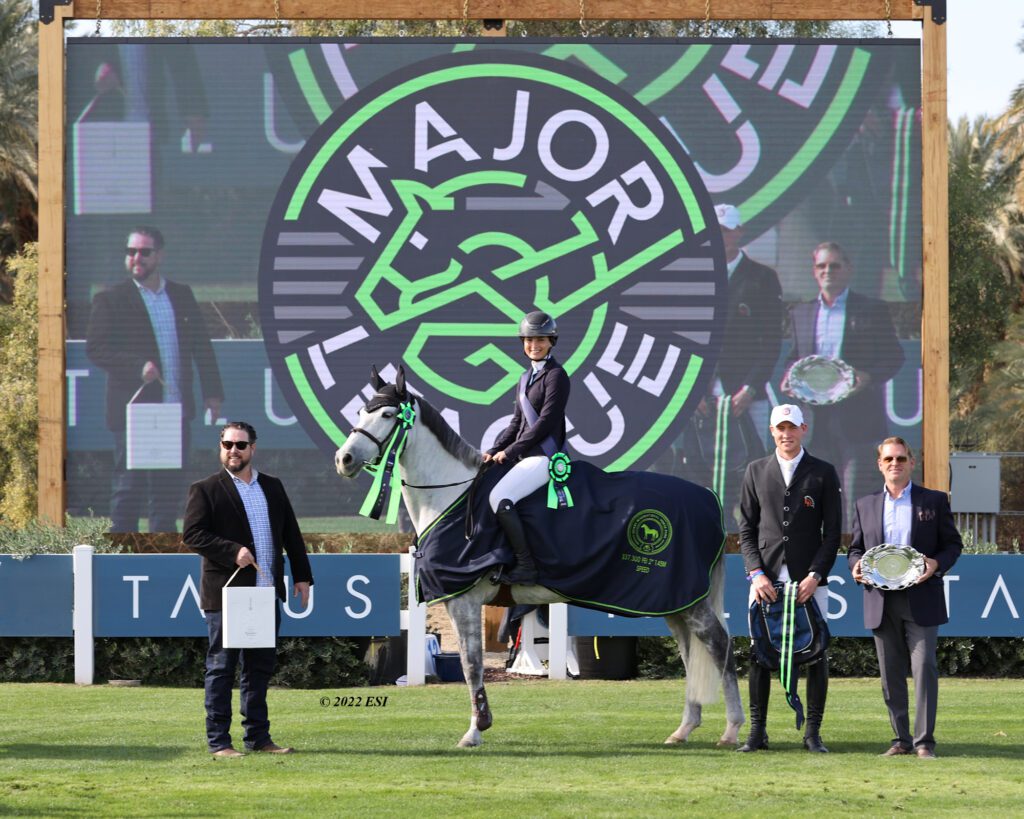 It’s purely coincidence, but Macari has solely mares in her string at the moment. “I’m kind of leaning now towards mares; I love them. They’re quirky and have their attitudes but I love them,” she commented.

In the CSI5* Amberway Equine 1.40m Two Phase, Macari topped 73 entries on IB Chica, a ride she got from Rupert Winkelmann (GER) just prior to heading to the MLSJ events in Mexico. “Chica got to my stable one week before the horses left for Mexico,” Macari recounted of the 9-year-old Hanoverian mare owned by Eickendorf Horses. “The first time I sat on her I called [Rupert] and said I didn’t think it was going to work. I couldn’t even canter her. He told me to take my time. She’s a bit unconventional; she swaps and kicks. But she’s been clear in every round I’ve ridden her in so it’s been amazing. I had to trust her and it worked out.”

This is Macari’s first journey to DIHP and the fortunes are falling in her favor, but she is enjoying the time in the desert regardless. “I love it,” she said of DIHP. “The footing is amazing; it looks beautiful. I couldn’t believe we could ride on [this field]. I took a hack to the big stadium and I was very impressed. It’s a beautiful place.” John Zambrano rode Glenda Monkarsh’s Monaco to a championship effort Thursday morning of Desert Holiday I as the High Performance Hunter division came to a close. In their three-year partnership, the 10-year-old Oldenburg gelding has come a long way overcoming show ring nerves and rising to the occasion to become an incredibly competitive horse.

“He was a jumper and a very capable horse but very nervous,” Zambrano said of Monaco’s past. “We had to do a lot of work to get him to this level and win with him. He’s very pretty and he’s a really nice mover, and really athletic. His way of going is very light, like an old thoroughbred hunter.” The challenge came mostly in the time spent between the trips in the show ring, so Zambrano and his team came up with an alternative approach. “We realized I had to warm him up quickly, then get off, sit and wait for my turn, and then go right in the ring. That gets him in the ring in a relaxed way rather than taking a whole round to relax,” he explained.

Peter Lombardo saw the talent in the horse prior to importing him from Europe, but he knew it would take some work to sort out the nervous tendencies. “The lady who we bought him for was willing to take the time and she’s been a wonderful owner because she sends him to all the shows we want him to go to, so she gives him a beautiful opportunity to be the best horse he can be,” Zambrano explained.

Competing at DIHP will set Monaco up for success on the East Coast as the team plans for the horse to compete at various prestigious events back east in the 2023 competition year.

“What I like about Desert Horse Park with the new management is that the actual jumps are beautiful and there is a lot to look at,” Zambrano continued. “When you show back East the jumps are spectacular, but in California the jumps can be really plain and not the height they’re supposed to be. But this horse show and this division is a real level. So when I show him at Devon this year in the High Performance neither the horse nor I will be intimidated because we’ve jumped the same jumps. I appreciate how beautiful they make the arenas and how they pay attention to every detail of how the show is presented, no matter what arena you go into.”

Conor Swail is back to his winning ways at DIHP. After taking countless victories last season, the Irish rider, ranked number five in the world, kicked off Desert Holiday I with a win in the $30,000 Bridgeport Farms 1.45m Open Classic aboard Errol. He led wire to wire, coming in first in the order of 36 and holding the winning time of 69.213 seconds through the rest of the class, over two seconds faster than any other competitor. Patricio Pasquel and Chakkalou PS were second in 71.271 seconds, with Keri Potter and Bisou, owned by Tres Palomas, in third in 72.438 seconds.

“He likes it here,” Swail said of Errol, a horse that took victories during Desert Holiday last year. “He’s been a very good horse for me all summer and he [was good in] Vegas two weeks ago. He is in good form and it gives you confidence going into these classes to know that he has the ability to win it, and if we do everything correctly we have a good chance of a good result.” The course, set by Alan Wade, provided a variety of challenges with speed being the top priority in this single-round class. “The course was a good one for Errol because of the stride patterns,” Swail explained. “My horse does the numbers quicker than most because he’s such a little small pony. The numbers suited him. You needed a smaller step to go fast tonight and that’s maybe where I had the advantage.”

Swail has spent quite a bit of time in Thermal over the past couple of years and intends to keep the venue on his schedule throughout 2023 as well. “The facility keeps improving all the time. I really enjoy competing here, I think the horses like jumping off the great footing. It’s been a while since I’ve been here but here we are again and I’m glad it’s started off very well. I hope it continues that way,” he said.