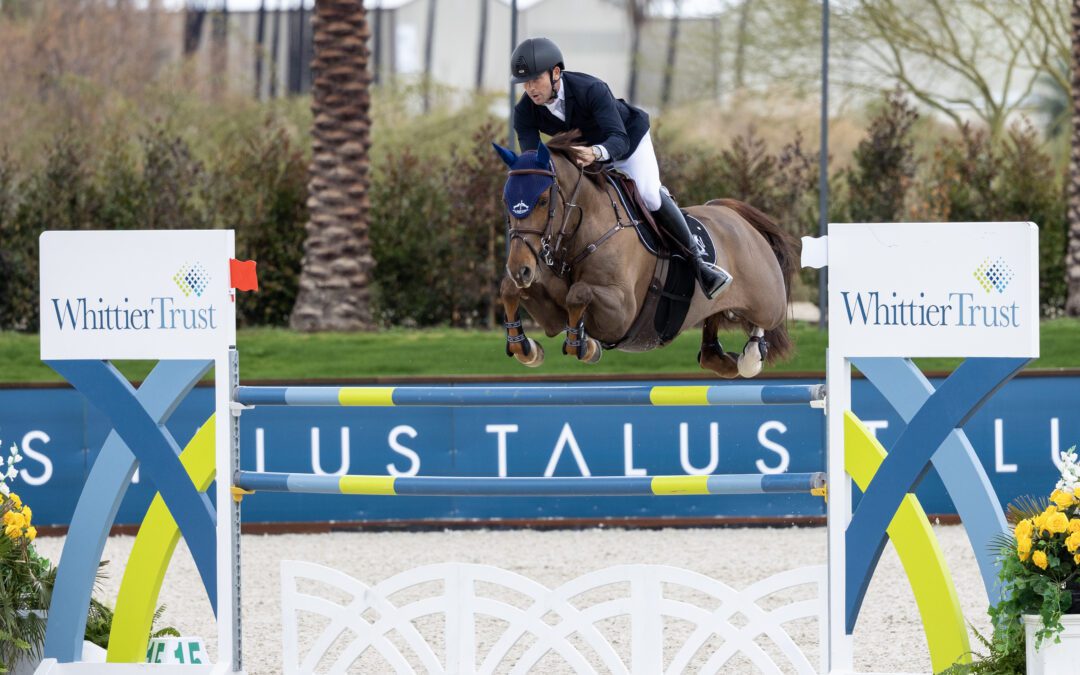 Conor Swail (IRL) is typically an easy favorite to win international competition at Desert International Horse Park (DIHP). Though Sunday was no exception for the $145,100 CSI3* Whittier Trust Grand Prix, he had tough competition to sneak past to score yet another victory to conclude Desert Circuit II. 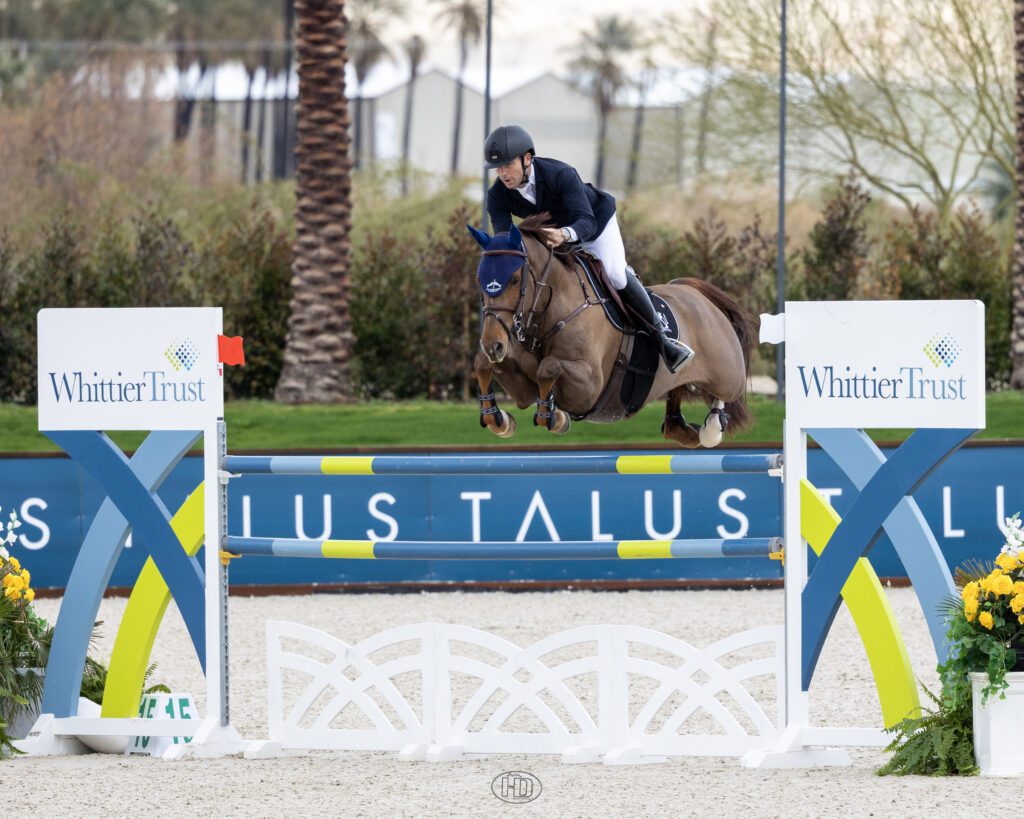 Prior to Swail’s clean effort with Theo 160 over Colm Quinn’s (IRL) track, a few notable names on talented mounts had secured spots in the jump-off. Two Olympians, in Gregory Wathelet (BEL) and Cassio Rivetti, plus Kyle King (USA) and young superstar Eliza Broz (USA), stood in between Swail and the eventual top call in the first FEI Grand Prix of Desert Circuit 2023.

As the crowd prepared for what could only be a blazing fast jump-off, each of the first four competitors pulled rails on course, leaving the door open for Swail and his trusty partner Theo 160 to put in a clear round and win the class. It wasn’t that easy, though. Wathelet put the pressure on aboard Clarity, with a 4-fault round in 36.61 seconds, just to be topped by Rivetti with Ilan Ferder’s Nadale Van Dorperheide in a 4-fault time of 35.52 seconds. If an unlucky rail were to fall, the hope of winning from a play-it-safe strategy was lost.

“I was last to go and there were two very fast 4-faulters and two 8-faulters so my strategy was to go around clear,” Swail said of his ultimate double-clear effort. “I thought my horse was jumping well enough this week that we could gamble on slowing it down and just trying to jump a clean round.”

Swail admitted Theo 160 was prepared to go fast, as he is typically asked to do in jump-off action. “He dove a little right on me over fence one; he was probably waiting for me to do a sharp turn or something,” Swail remarked. “That wasn’t really the plan. It was just about trying to get home safely. Thankfully it went to plan apart from that first jump there. The horse has been great all week. He’s a fabulous horse, he’s been on a great run. He finished up fabulous last year. He’s continuing on the good form so it’s a great start for me.” A few months prior, Swail admitted Theo 160, owned by Team Philippaerts, wasn’t on his usual rhythm of clear rounds. “He wasn’t himself for a period of time,” he commented. “He was still trying hard but he had lost a bit of confidence and a bit of stride. We went through the basics of how healthy he was feeling and did some exercise and training at home. We got the vet to look at him and got him going again, and off he went.”

Swail’s travel schedule in 2022 allowed him to maximize FEI competition in the United States, keeping a number of horses in California to compete for top honors in the FEI events in the desert, while also keeping himself in contention for CSI5* action. “I have the same group here that I had last year actually,” he said. “Vital Chance [De La Roque] just arrived this week and he’s going to come out next week. Normally Theo is not my number one horse but it was his job to be number one this week and he really stepped up. He had a fabulous week. It is great to be able to manage your horses that way. I have my best horses out [of competition] this week but I’m lucky enough that I have a great string that they’re very capable of stepping in and doing a great job.”

Rivetti ended up in second with Wathelet in third, making the podium a who’s who of top-level show jumping.

On the final day of Desert Circuit II, it was Kaitlin Campbell and Linda Starkman’s homebred Sun Warrior who topped the $30,000 Marshall & Sterling 1.40 Open Classic Sunday out of a field of 37 horse-and-ride combinations. Campbell climbed to the top of the leaderboard aboard the 9-year-old chestnut gelding with a speedy jump-off time of 38.768 seconds, making it look effortless. Campbell notes, however, that her partnership with Sun Warrior, known as “Junior” in the barn, was not always as flawless as the round spectators witnessed today. “It was a rough time at the start, and it’s taken a lot to get him to where he is now, but he’s really stepped up to the plate. He’s won a lot of classes,” Campbell reflected about the horse she’s ridden the past three years.

While it wasn’t a match made in heaven in the beginning, Campbell reflected on Junior’s progression from an excitable young horse to where he is now.

“When he was a young horse we did so many rounds at an uncontrollable speed without any steering and I refused to circle,” Campbell continued. “I didn’t want to let him win that, so [today] I knew I couldn’t possibly go as fast as I did in some of those rounds, not on purpose.” Campbell described the flashy chestnut gelding to have a lot of personality, both under-saddle and on the ground, even proving stubborn at times.

“Junior decides what he wants to do at his own pace,” she went on. “We didn’t do lead changes for the first six months, and one day he suddenly did lead changes. [At first] he wouldn’t walk into the wash stall, and one day he decided to walk into the wash stall. He’s like that riding too. I have to make sure I don’t over-do it, and he doesn’t scare himself. Once he has the confidence to do something, I don’t think there’s anything he won’t do.”

Campbell’s jump-off pushed top Irish rider Conor Swail to ultimately finish in second with a close time of 38.885 seconds aboard a new mount, Casturano. Nicole Haunert claimed third with Cherokee Show Horses’ Calgary IV. When asked where she thought she made up time on course, she credits her horse’s jumping style and technique.

“I know now I can let him go and he listens to me a lot better, and he’s very fast across the jumps,” Campbell continued. “Conor’s horse spent a lot of time in the air and was giving really good efforts, but my horse jumps a little bit faster through the air.”

Even with an exciting win today, Campbell and her team at SWS Training and Sales are no strangers to the winners circle here at DIHP.

“We pretty much show at The Desert Horse Park [year-round]. With all of the improvements they’ve made, the horses are super happy, especially this horse. He loves to be ridden back on the track in straight lines. We get a nice gallop so I really think that’s nice for the horses to get out of the ring,” Campbell said.

Looking towards the future, Campbell has great plans for Sun Warrior, and believes this to be just the start. As a young horse, she prefers he go fast, be competitive at this height, and make a mistake or two before he starts jumping even bigger tracks.

Campbell, a true competitor, laughed as she was advised that a double- clear could get her a nice paycheck this week. Her response, naturally, was, “but that’s not fun!”

Not many competitors at Desert International Horse Park (DIHP) have the pleasure of competing alongside and against their own mothers, but that is precisely an honor Isabelle Moore had during Desert Circuit II.

Aboard her mother Jennifer Berman’s Theodore, Moore put in stellar rounds to receive double scores of 86, putting herself atop the leaderboard in the DePaolo Adult Hunter Classic. “My mom initially got [Theodore] for herself and I fell in love with him and kind of adopted him to be my own,” Moore, of Pacific Palisades, CA, said of the 13-year-old Warmblood gelding. “I’m away at college and every time I come home we just click. He’s always there when I need him.”

When asked what makes them click so well, she responded, “I think his personality; he has so much going on in and outside of the ring. He’s always got his ears forward, every jump he slightly grunts, so you know it’s a horse with a good brain. Outside of the ring he’s a cookie and treat monster who loves people, especially those who give him food. He’s really easy to love.”

Along with her own riding goals, Moore supports her mother’s goals in the ring. “My mom is an amateur and she was competing against me today on her other horse, Stiletto,” Moore continued. “She’s ridden her whole life and she was the one who got me into it. When I was a junior she did the adults so we never really went head to head. It still feels the same though; there’s no competitive nature between us. We also both started doing the jumpers. We’re competing against each other in the jumpers as well. Maybe I feel less competitive because I won!”

The relationship between the two on the showgrounds is a very supportive one. “We are always watching one another,” Moore explained. “I’m a big part of her learning her courses and walking the courses, and I help her get to the ring on time. We always watch each other, support each other, walk courses together, and even compete against each other.”

Moore attends the University of Wisconsin, pursuing a Political Science and Legal Studies Major. While she can’t be in the saddle often, she maximizes her time at home and enjoys coming to DIHP while school is out of session.

“I take advantage of the times I’m home as much as possible,” Moore said. “Luckily we have long winter breaks which line up with Desert Circuit, so I’m able to come home and get right to it and show up in the desert for this. I have to make the most of it when I do have the time.”

While Moore heads back to school following Desert Circuit II, her mother, Berman, stays in the desert to continue showing and may even add new horses to the string. Hunter action gets back underway for Desert Circuit III on Wednesday, January 18.