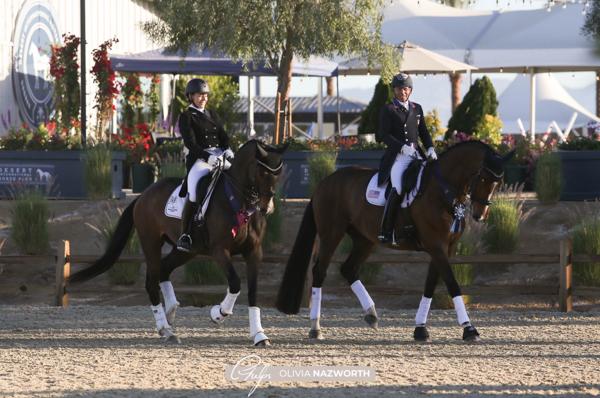 Thermal, Calif – Feb. 18, 2022 – Competition at the Desert International Horse Park (DIHP) heated up as the California sun went down on Friday, wrapping up the first day of Adequan Desert Dressage III competition with the CDI3* Prix St Georges and the CDI3* Grand Prix Special qualifier in the hunter rings. As the day came to a close, it was Olympic silver medalist Steffen Peters aboard his longtime mount Suppenkasper who took home their first Grand Prix win since the Tokyo 2020 Olympics with a score of 76.652%. Canada’s Shelley Lawder and Zaouira followed behind in second place with a score of 67.587%.

As the day came to a close, the horse-and-rider combinations vied for the top position in the CDI3* FEI Grand Prix. However, it was Steffen Peters that dominated the field aboard his Olympic mount Suppenkasper, a 14-year-old KWPN gelding, with a score of 76.652%. Coming off of a well-deserved break, Friday night’s competition marked the Olympic Team Silver pair’s first competition since Tokyo. Peters and longtime partner, “Mopsie” did not miss a beat. Peters elaborated, “The goal for today was to keep that level of competition that we had in Tokyo. That’s exactly what he did. The Grand Prix score was likely higher than Tokyo. This is usually the way we start in the Grand Prix, a little conservative, easy on the extensions, not so crazy on the changes. The half-pass was very controlled. It was very clean and straighter, he used to sway a little bit. There’s improvement. He has a very good respiratory rate, he’s fit and ready to go here.” Even as a five-time Olympian, Peters still goes over his rounds with a fine tooth comb looking for areas of weakness that he can maximize on for the highest possible scores. In Friday’s test, he noted, “It sounds boring but the collected walk can be very tricky for him. He waited for the letter this time. Sometimes he anticipates it though. These were highlights for me today, because he was mentally sound. The little things were highlights because the expressive moments are usually there.” The 58-year-old athlete has undergone an evolution in his several decades of riding, explaining that, “It’s great. Obviously, at my age, the day of retirement is coming closer. But not yet! It felt really good to be back. Tokyo was exactly 6 months today, and this was the longest break I’ve taken from showing since I was 12 years-old. So, it was nice to take a break. Not so much physically but mentally.”

As the iconic duo took to the ring once more, Peters noted that the excited is still there for him even after countless international victories and years together with his beloved partner, Mopsie, stating: “I love him even more. We have a new routine when I put the bridle on. For a few minutes, he likes to rest his head on my shoulder, then he closes his eyes. And then I think once more about the test and we go.” With what seems like every major goal accomplished for a veteran of the sport like Peters, he still aspires to compete at the highest levels and is not slowing down even by the smallest of margins stating, “Well this year we have the World Equestrian Games in Denmark. And today was already a nice qualifying score. The goal would be to go in early June to Europe.”

A longtime resident of California, Peters used to make the cross-country trek to Wellington, Florida for the full season at the Adequan Global Dressage Festival, but with an up and coming international dressage venue in his very own backyard Peters exclaims, “It’s great. So many people ask me, “Why are you not in Wellington?” I think it’s phenomenal that Thomas [Baur] put two divisions out here. I feel almost obligated not to miss it.”

Peters and Suppenkasper will return for another go under the lights in the desert Saturday for the CDI3* Grand Prix Special.

Coming in second place was Shelley Lawder on her 14-year-old Hannoverian mare, Zaouira. Most recently campaigned by owner, Linda Houweling, also of Canada, Lawder and Zaouira also made it a night of firsts coming out of a brief hiatus from the world stage. Though, one would never know the pair had not set foot in an international competition since 2018 as they breezed through the complex test with ease, scoring a 67.587% for the red ribbon. The Prix St. Georges class showcased a small but mighty circle of riders. Rebecca Rigdon (USA) and her personal mount, Iquem, wowed the judges with their ride, earning a 67.765% for first place. Close behind was Allida Taylor (USA) with Quarter Fox, scoring a 66.941% for second. Rounding out the top three with a score of 65.059% was Eleanor Klawer (USA) with Dantesse. The CPEDI3* classes, presented by Perrigo and Adequan, featured a talented group of riders. Canada’s Winona Hartvikson and Onyx won the blue ribbon in the Grade I with a score of 72.857%. Mia Rodier-Dawallo and Cato claimed a 66.919% to top the Grade II. Finally, Canada’s Laura Hall and Istrano rounded out the winner’s circle with a score of 66.958% in the Grade IV.

Competition in the Desert will resume Saturday with the CDI3* Grand Prix Special at 6:50 p.m. and the CPEDI3* Para Individual Championship.