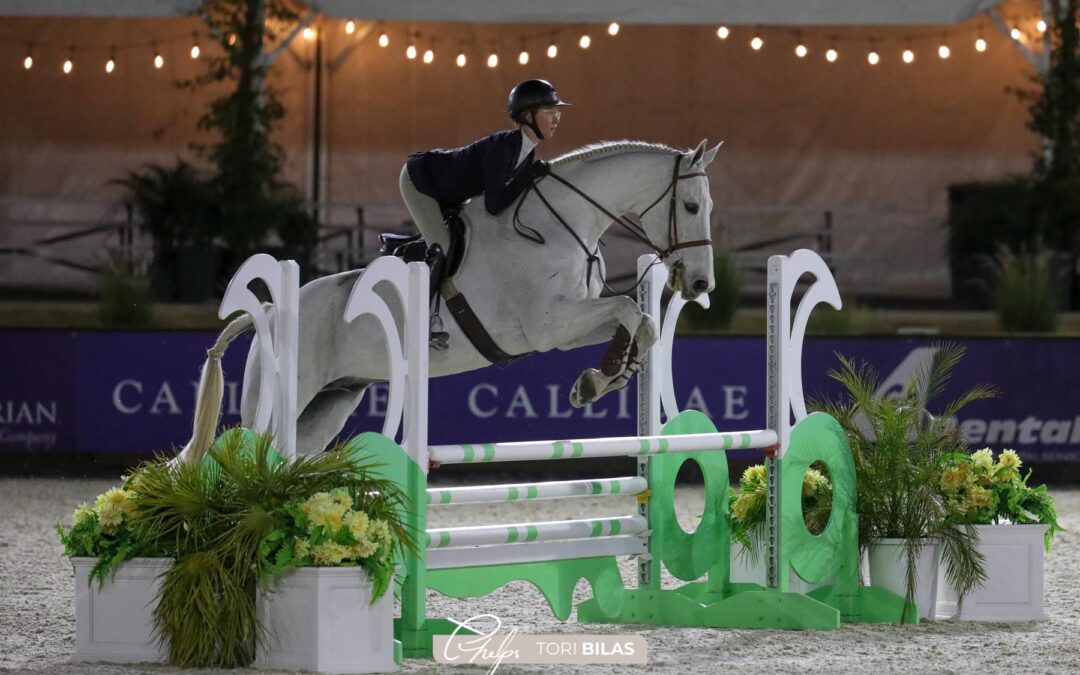 Thermal, Calif. – Feb. 4, 2022 – Friday evening of Desert Circuit III welcomed a new class to the Grand Prix Arena. Junior and amateur athletes took part in the Whitethorne Friday Night Lights Equitation Class. Set to occur every Friday evening from Desert Circuit III until the Ronnie Mutch Equitation Classic during Week VIII, this equitation class will allow riders to accumulate points and the overall winner at the conclusion of the class will win a Butet saddle. Emerging on top for the first class of the series was Skylar Wireman with a score of 88. Riders completed a single round featuring 10 obstacles and multiple tests on course, including a halt after fence six, a counter canter to the oxer at fence seven, and a trot jump at fence nine. Georgy Maskrey-Segesman of Whitethorne intends for the class to be a preparation for the Ronnie Mutch Equitation Classic and provide exposure for juniors and amateurs under the lights and in the expansive Grand Prix Arena. Maskrey-Segesman, a strong believer in short-term goals, is awarding a Butet saddle to the rider who accumulates the highest number of points over the series. 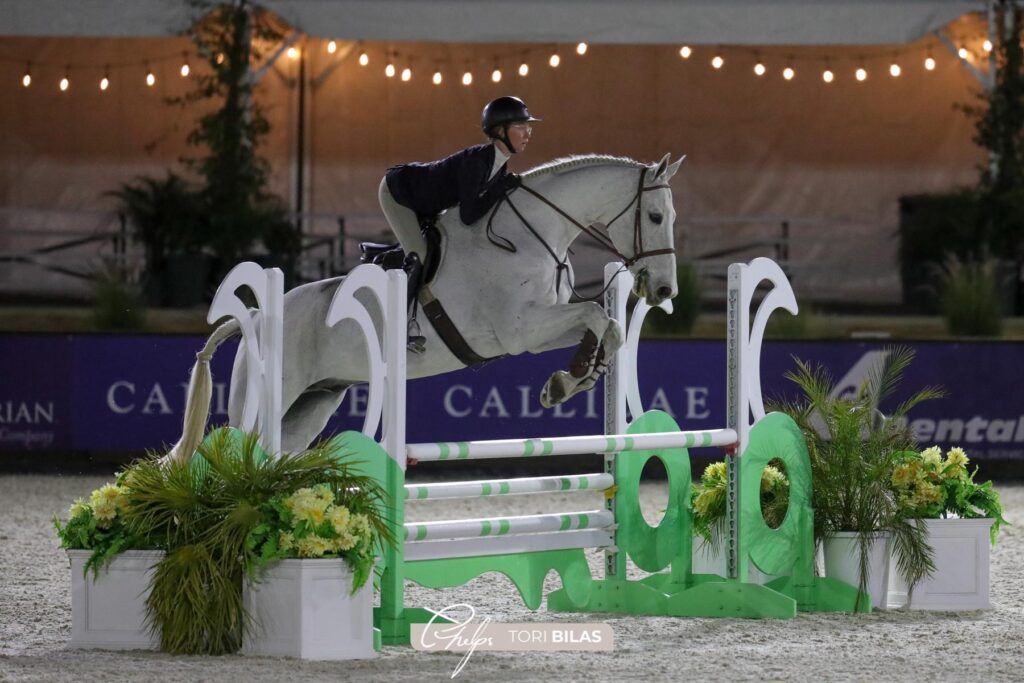 Wireman has her sights set on all the equitation finals in the fall of 2022 since she only has one remaining junior year. While the evening’s course was built friendlier than an equitation championship would be, Wireman rose to the challenge and aced all the tests with Famous, owned by MKT Investments, LLC, the horse with which she won the CPHA Style of Riding Finals in November of 2021 at DIHP. She carried a fluid, forward pace to each of the jumps and pulled off an effortless halt before riding a strong counter canter and completing the course with a trot jump and the final oxer to earn a solid score of 88 to take the win. Second place was awarded to Avery Rose Glynn aboard Donatello, owned by Elle Rose, with a score of 87, while Emma Guevara and her own Cassano rounded out the top three on a score of 80.

Earlier in the day, international athletes piloted their three-star mounts in the $37,000 Marshall & Sterling 1.50m Classic CSI3*. Alan Wade (IRL) set the track for the speed-format class, which included three double-combinations and 12 total obstacles across the expanse of the Grand Prix Arena. Thirty-four entries gave their best shot at the fastest clear-round time, but ultimately it was Ireland’s Conor Swail (IRL) who rose to the occasion riding Team Philipaerts’ Theo 160 to claim first place honors after crossing the timers in 60.93 seconds. Swail also managed to nab second place aboard his second mount in the class, his own Vital Chance de la Roque. Fellow Irishman Nicky Galligan rounded out the top three aboard his own Javas Miss Jordan. Competition during Desert Circuit III in the Grand Prix Arena will continue Saturday, February 5, with the highlight class, the $25,000 FarmVet Grand Prix, concluding the day under the lights. International competitors will contest the $37,000 Marshall & Sterling 1.45m Classic CSI3* Saturday afternoon.

On how the class feeds into her Equitation goals:
“It’s my last junior year so my goal is all the big eq finals. I’d like to go and do well. Something big out here for me is going to be the Ronnie Mutch Equitation Classic during Week VIII so I think this class being at night was great practice to get out there. It makes everyone feel more comfortable going into the Ronnie Mutch because they will have ridden under the lights. It was a good practice under the lights; you don’t get many of those here so it was great.”

On the course:
“I didn’t actually even get to walk the course. I think I walked part of it for the High Junior Jumpers earlier but I was at the other ring during the walk. Avery [Glynn] told me the course and I was very thankful for that. It was a nice course; the lines were all flowing and there were some nice bending lines. The tests – the halt, counter canter and trot jump – were great. It was a good course. It was nice and flowing and everything was forward so I just kept riding forward.”

On Famous:
“This horse I have gotten to know a little bit since he’s been with us. He’s a sale horse and I won the CPHA Style of Riding Finals here in November under the lights as well so I knew I could count on him for this class. He’s really become quite the equitation star. He was a 1.30m jumper and now he’s doing quite well as an equitation horse.

On the round:
“I had an early draw again this week. I had Theo [160]  first. I started off with a decent rhythm, good turn to fence two, nice four [strides]. Then it was a nice wide nine strides to the double, which was an easy six strides. I got over in nine strides to the oxer across the middle, which is the number I wanted. I got a good turn to the liverpool. After watching a few when I had finished, the double [at fence eight] caused a lot of trouble actually at the ‘A’ element. I got in and the horse was very good to me there. We jumped fence eight ‘B’ great. The seven strides got a little iffy; he sucked away off the back rail of that. I finished off of that, leaving off the turn in the vertical. I was very happy with the round. If I had to do it again another ten times, I don’t know how well me or [Theo 160] would have done it to be honest. I was very pleased. I just felt everything come up the way I wanted it to. It was one of those rounds that everything worked well. It doesn’t happen that often, but today it did, which was nice.” On Theo 160:
“He is still quite inexperienced. He’s one of those guys that puts in a good shift every time he goes in. He tries to do his best. We get a lot of good results together. I honestly think he’s going to get better as well. As much as we are consistent, I think that we get smoother and easier as time goes on. He’s a very good guy. He’s very relaxed and calm. He gets a little edgy in the warm-up. He’s a little afraid of horses coming from his left side. He’s a very nice, placid horse there.”

On his ‘less bit, less spurs’ theory:
“It works with what I have at the moment. Theo [160] is very sensitive to my leg and – he’s already running – but too much pressure makes him run faster. Less is better with him; that’s why that works. [Vital Chance de la Roque] is very sharp and also runs so, again, there’s no need to be kicking him any harder because he already runs by himself. That’s an easy enough explanation for those guys.”

On his use of a hackamore:
“[Vital Chance de la Roque] kind of hides a bit and dodges at the end. Whenever I try to balance him a little when I have a bridle, I feel it takes too much energy and scope away. Whereas when I have the hackamore, there’s a little more pressure on the nose. He’s able to jump through the hackamore better. I feel he still has enough power and scope to jump everything that we want to. I think that’s my theory for now.”

On DIHP:
“I’m getting fairly familiar here with this park. It is making great improvements all the time. Even from December, I can see some nice changes. It’s a lovely environment to work in, also for my horses. I’m delighted to be able to come here and partake.”