Luis Sabino Goncalves feels like he has returned home. The Portuguese show jumper left his home nation in early 2021 and has seen many top results since then at the Desert International Horse Park (DIHP). He started the 2022 National Sunshine Series off on the right foot, winning the $30,000 Open 1.45m Classic, sponsored by Bridgeport Farms. 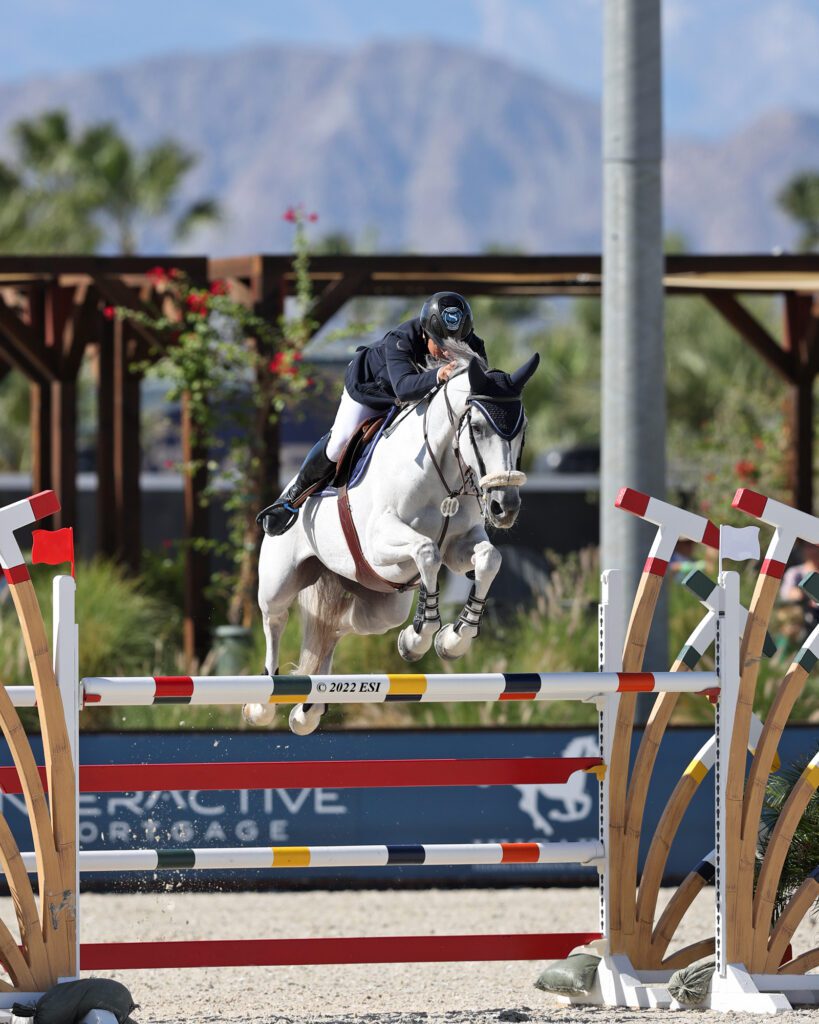 Aboard a newer ride, Vick Du Croisy, owned by Sigma Stables LLC, Goncalves is already on a hot streak and is not slowing down anytime soon. He purchased the 13-year-old Selle Francais mare (Mylord Carthago x Vondeen) in June of 2022 and the pair has already taken home a CSI3* Grand Prix win.

In Thursday’s Classic, set in a speed format, Goncalves used natural footspeed to his advantage and even added a stride down one of the later lines, but still ended up atop the leaderboard as the start list of 53 entries came to a close. The duo crossed the finish timers in 63.370 seconds, setting a high standard for the rest of the class to catch. 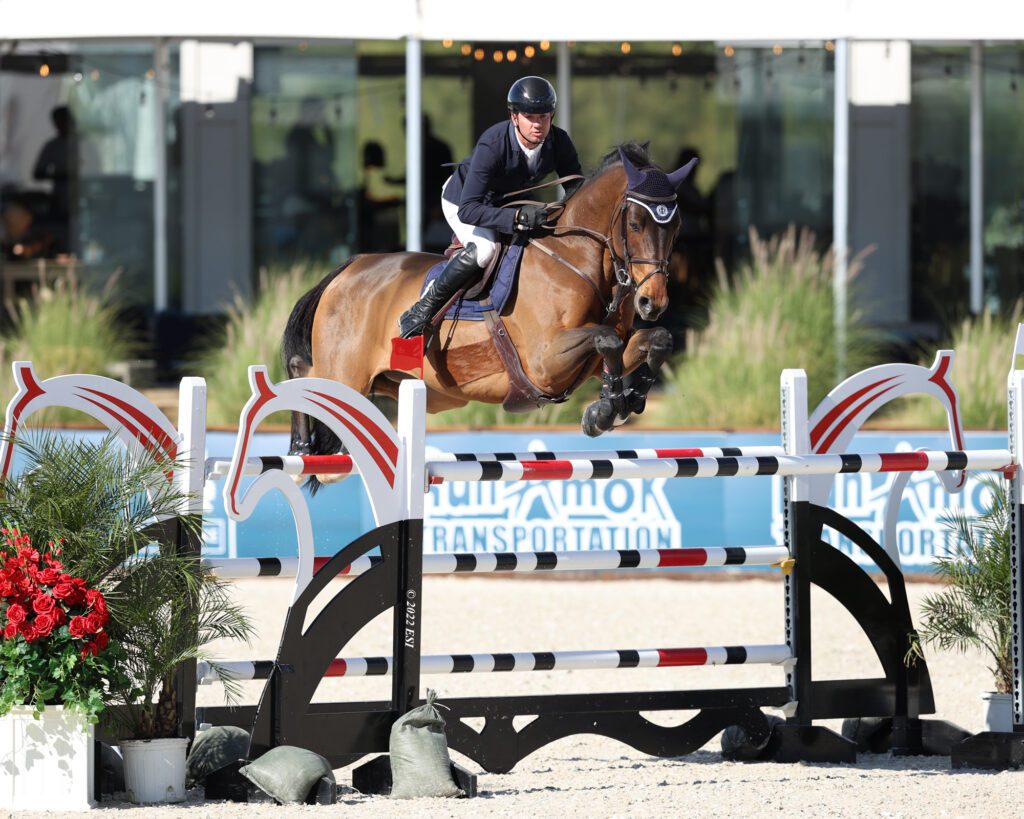 Ireland’s Alan Wade set a challenging course for the inaugural occasion. His course challenged the riders and proved that the stakes were high coming into this season at DIHP. 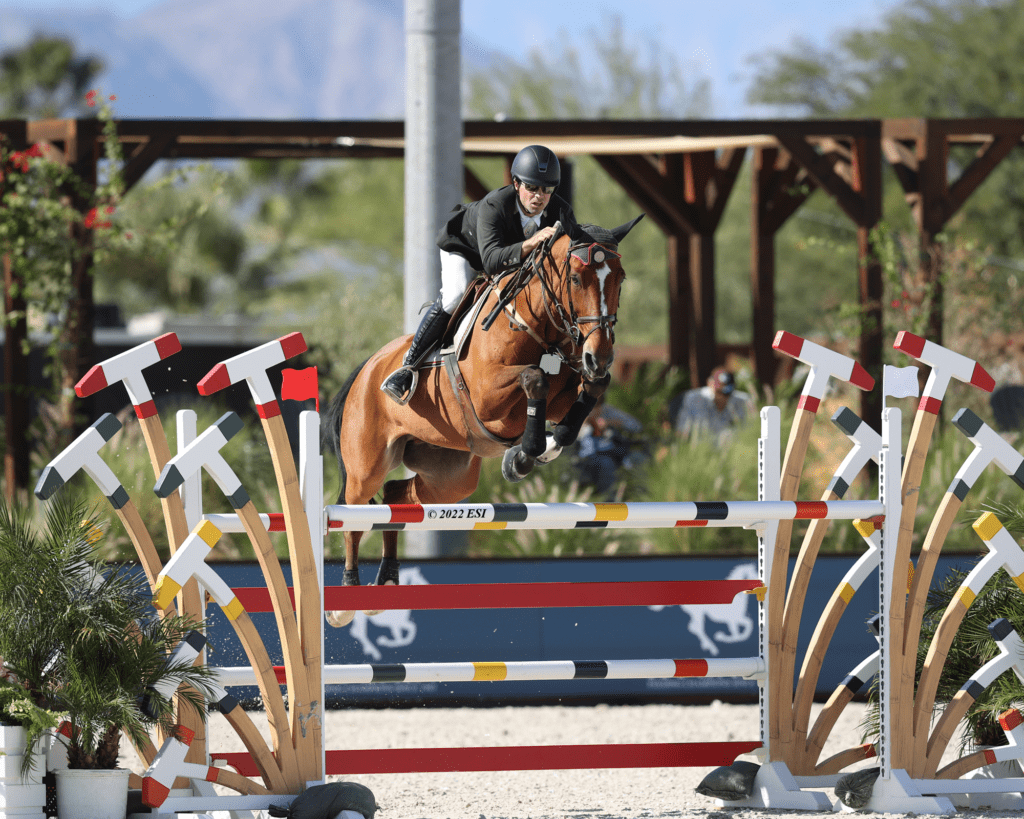 “She’s started here with a good win and I’m very happy,” Goncalves reflected on his win with Vick Du Croisy. “She’s got good blood. I like to go fast but I try to control myself. She’s already too fast. Sometimes I get a fault because she can get anxious. I try to never say to the horse that I want to go fast.”

Goncalves moved to California last year. “It feels like home. It’s an amazing facility and the people are very nice and kind here. It’s the same as Portugal; it makes me feel at home,” he said.

It wasn’t long ago that Goncalves was campaigning another grey mare at DIHP, and now that mare, Argan De Beliard, has moved up to the championship level with the USA’s Lillie Keenan aboard, jumping the 2022 ECCO FEI World Championships. “That mare is a sister of [the horse that won today],” he said. “They have the same father. I like that stallion, Mylord Carthago, because the horses are very smart, very careful, and fighters in the ring. She already did a four-star grand prix in Italy with a top amateur, and jumped clear rounds. Overall I’m looking for good canter, scope, and careful horses, and at the same time they should go in the ring and help us. A smart horse makes our life easier.”

Goncalves aims Vick Du Croisy at Saturday night’s $100,000 Hygain Feeds Grand Prix, beginning at 6:15pm. Friday features Junior and Amateur jumper divisions, followed by the first round of the $100,000 WCHR West Coast Hunter Spectacular at 1:00pm, with the top 12 to return under the lights at 6:15pm.

Jenifer Paris, of Elk Grove, CA, is seeing seven years of hard work pay off in her partnership with Shameless. Having purchased the 9-year-old American Warmblood gelding as a 2-year-old, Paris and “Garth” are coming into form. The pair secured the first hunter championship of the National Sunshine Series, and the 2022/2023 season at Desert International Horse Park (DIHP), in the High Performance Hunters Thursday morning. “When he was 2 years old he was pretty much feral,” Paris said of Shameless. “You couldn’t really touch him. My husband is the one who broke him for me. It took us 90 days to be able to saddle him, so he’s come a really long way.”

What really piqued her interest when she got the call about Shameless was his breeding. “The guy that bred him called me about breaking him,” Paris explained. “When I went to pick him up, he said this horse was by Ragtime. I actually showed Ragtime and I had four of his babies myself. When my husband started riding him, I watched him trotting across the property and I free-jumped him the next day. I called my mom and said, ‘We have to buy this horse.’”

The process was not smooth to start, as the horse was difficult to break under saddle and took a little longer than most to develop into a top show prospect. “I knew he had the jump, the movement, and the look, but he’s been very difficult to bring along. Over the last year he’s started to come into his own and has won a couple international derbies,” Paris continued.

Now that they’ve made it to the highest level offered in the hunters, the plan for Shameless is to continue building his confidence so he can take on bigger stages.

“We’re going to attempt the [WCHR West Coast Hunter] Spectacular tomorrow night,” she said. “We’re planning to do the International Derby next week. I’m trying to get him confident enough that we can go to Kentucky [for USHJA International Hunter Derby Championships]. That’s the ultimate goal with him. He was qualified this year but I didn’t feel like he was ready.”

Like many Californians, Paris is pleased to be back competing in the desert, despite the fact that Thursday started off with quite a chill in the air. “I love it here. We look forward to it every year and I love that they keep making new improvements. Every time we come back there’s something new that’s better than it was last time. We just enjoy our time here,” she concluded.