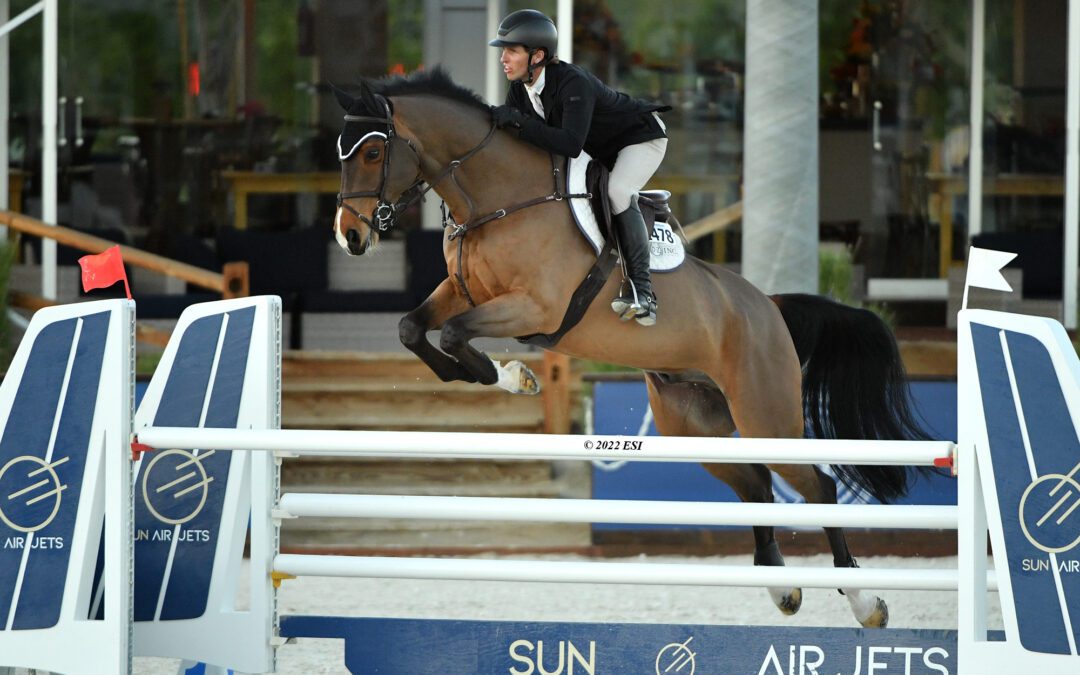 Thermal, Calif. – Jan. 19, 2022 – The first week of Desert Circuit 2022 kicked off on Wednesday at the Desert International Horse Park with the season’s first feature class in the Grand Prix Arena, the $2,500 Whittier Trust 1.35m Welcome Speed, set over a Ken Krome-designed track. Twenty-three entries sped through the single-round speed format, trying to snag the fastest clear-round time and set the standard for a successful Desert Circuit. As the final pair on course, Shawn Casady and Fugon scored the quickest clear time and the win in the class. 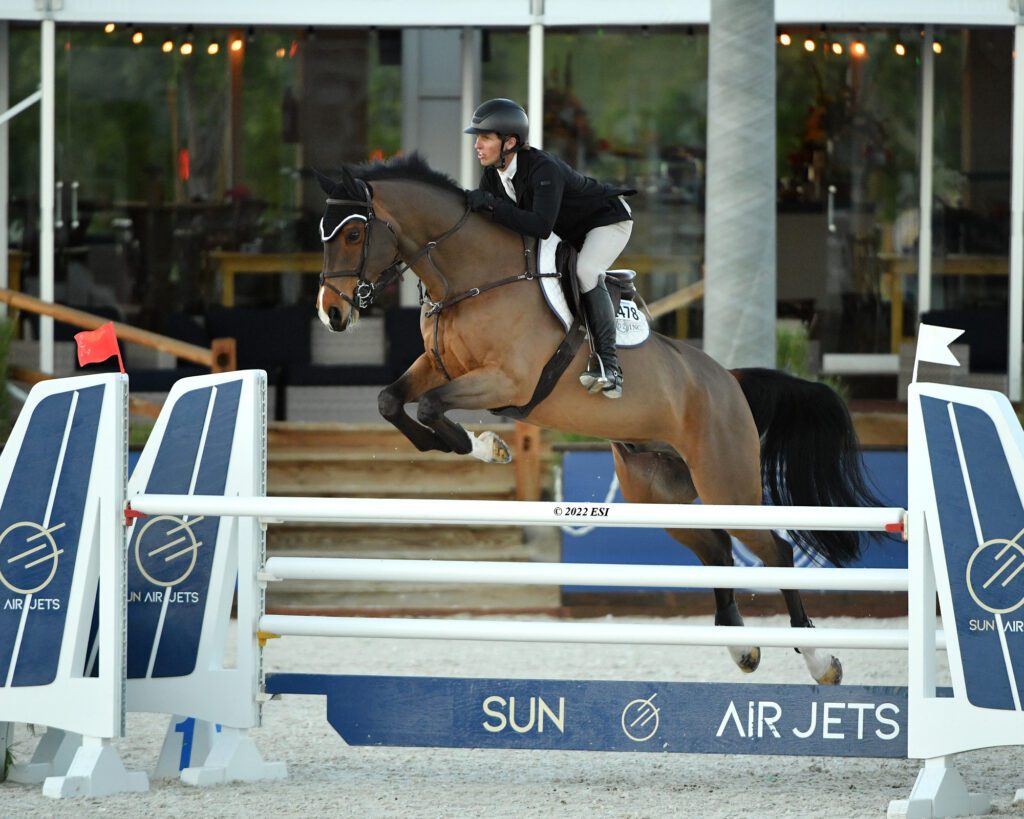 The course featured 11 numbered obstacles with 13 jumping efforts total, including an oxer-vertical double combination and a vertical-oxer double combination, plus several tight rollback turns that required precision and balance to execute quickly. In an attempt to shave valuable seconds off their times, the quickest riders jumped the single oxer at fence eight on a slice, took an inside turn from fence eight to fence nine, and turned very tightly toward the large oxers at fences three, five, and six, taking as few strides as possible along the way to the end timers. Casady piloted three mounts in the afternoon’s class, and as first to take on the track, Casady rode Tiffany Sullivan’s Castelissimo to the first clear round, getting a sense for how the course rode and how the jumps came up. France’s Eric Navet took an early lead in the class with a time of 61.470 seconds aboard Signe Otsby’s Coronado Blue NF, a 10-year-old Holsteiner gelding. His lead held for nearly 20 rounds, but would eventually place him second. Casady took to the ring midway through the order with The Points Guy, a 9-year-old Belgian Warmblood stallion owned by Elizabeth Kilham, to try to catch Navet, but narrowly missed his time, eventually finishing in third with a time of 63.781 seconds. Knowing he had a final chance to give it a go, Casady laid it all on the line, slicing fences and taking sharp turns, crossing the beams in a time of 60.803 seconds and snatching the lead from Navet at the very last second.

Of the three horses in the class, Fugon, owned by Oz Investments, was the one with which Casady had the least experience. He was offered the ride just prior to Desert Circuit beginning and had only ridden the 12-year-old Dutch Warmblood gelding a handful of times before piloting him to the win in the feature class. Shawn Casady and The Points Guy. Photo by ESI Photography

Desert Circuit I continues on Thursday with the $25,000 FarmVet Grand Prix. The weekend features the $40,000 Go Rentals Grand Prix with the $1,000 EquiFit U25 Classic, and featured jumper competition concludes with the $10,000 Interactive Mortgage 10 & Under Futurity Series.

On Fugon:
“I just started riding him. I rode him on the flat once in November, then he went back to Oregon. A few weeks ago, everyone was getting geared up for the winter circuit, and they asked me again if I was interested in riding him and I said yes. I rode him on Monday, and on Tuesday we did a 1.20m class and then this class today, so we’re just getting to know each other.”

On his plan for the course:
“My plan was to try to get as close to 61 [seconds] as I could. I didn’t think I was going to be able to go as fast as Eric [Navet], especially on a new horse. But clearly he was super game and quick. We just started and we seem to be getting along so I’m really excited and grateful for the ride. I’m in the process of building up my own business so it’s nice to have these horses to ride.”

On DIHP:
“I think it’s great. The Grand Prix Arena looks awesome. There’s no better footing in the country right now. The stabling is nice. It’s going to be busy; where I normally park there are now more tents. But it’s a good layout with the hunters right there. Everything being so close, you can get a lot of work done. Whether it’s young horses or grand prix horses, I think it’s a great place to develop them.”

On goals for the circuit:
“To win as many classes as I can. I have a new group. Obviously everyone wants to win, but it’s still important that I develop them and further their careers, making them more valuable. It all kind of goes together.”