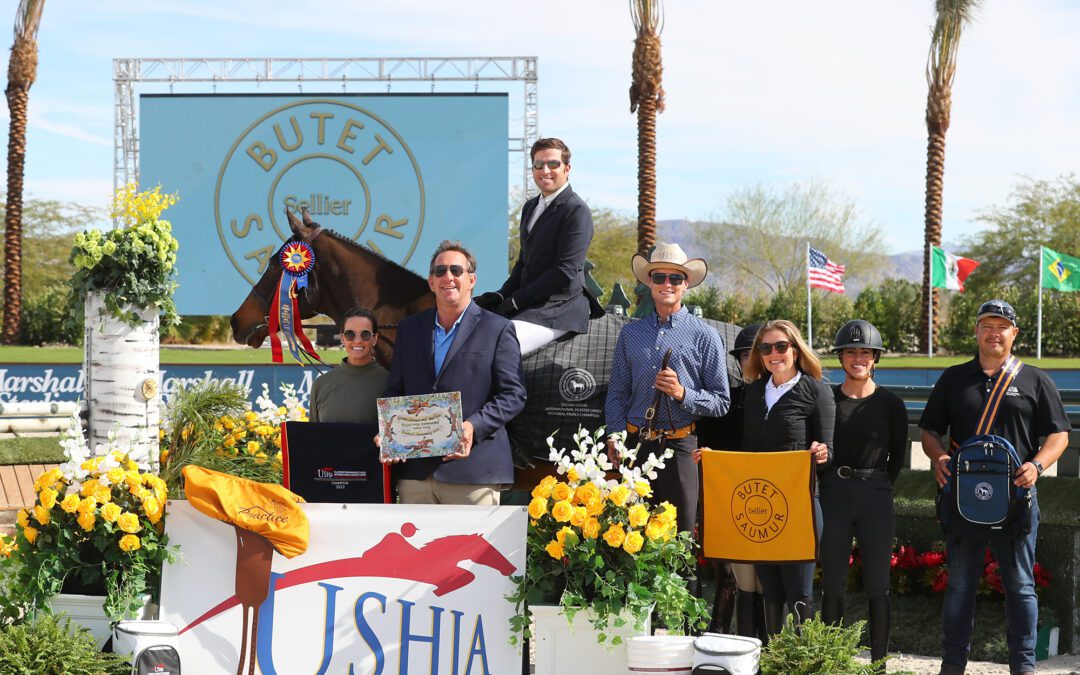 It’s no surprise that the horse is picking up so many accolades with Haness aboard. The horse has a proven record in the jumpers and has made a flawless transition into the hunter rings, while Haness has swept some major victories across the nation in recent months. “HH Elmo is an extremely fun horse to ride,” Haness said. “He has all the things you look for in a hunter: he has the stride, the scope, the looks, the movement, and perfect technique over the jumps. This is a very seasoned horse who’s competed all over the world. Every time he comes out for competition he knows when it’s an important class and he always tries to rise to the top.”

Similar to the pair’s last victory, they led wire-to-wire, taking the top score of 189 from the two panels of judges in round one, then returning and sealing the deal with a 205.5 in the handy round for the win. Nick Haness and HH Elmo in their winning presentation. Photo by ESI Photography

The course was built for the occasion by Thomas Hern, featuring beautiful fences and difficult high options, but HH Elmo was prepared for the challenge, especially considering his roots in show jumping. “Having the jumper background comes in handy for a class like today where the jumps were built very large,” Haness continued. “Having that ability and knowledge makes him really fun, especially in the handy round because you can turn sharp and challenge him a bit. He always just sails over the jumps.”

Joining Haness atop the podium was Nicole Bourgeois with McQueen, owned by Barbara Lovre, on a total score of 376. Chelsea Brittner and Kaylin Faidi’s Berry De Maillet rounded out the top three on a score of 375. “I particularly loved that the last jump was a long run to an oxer by the judges,” Haness said regarding Hern’s course. “I love to gallop so it was a fun way to end the course and show the judges I wanted to win the class. He jumped brilliantly.”

Haness has been all over the world as of late as his career highs keep getting higher, but he never forgets where he’s from. “I’ve taken a lot of flights the last few months between the East Coast, Europe, and back to California,” he remarked. “My roots are here in California and I’m excited to be back here competing, however we had a very successful and fun tour on the East Coast and buying new horses in Europe.” He anticipates a season full of top results among his string, with mounts in the big hunter classes and the jumpers. “They’ve developed a great schedule throughout the competition season,” Haness said of DIHP’s schedule. “You can really target events to look forward to and set goals for at any level. Fortunately I have a nice string of horses to compete here in the hunter and jumper rings so we’re very grateful and excited to be here and continue to hopefully win some big classes.”

Chelsea Brittner had a warm welcome back to the hunter rings during the National Sunshine Series, taking the win in the $10,000 Valencia Saddlery USHJA National Hunter Derby – Open aboard Arvantos. Having just returned from maternity leave, Brittner laid down beautiful rides and earned top scores of 94 and 96 for a combined total of 190 for the win.

A partnership since earlier in the spring of 2022, Brittner’s team and Greenley Achuck’s 6-year-old Oldenburg gelding have been moving up the ranks. “He’d never done the hunters before,” Brittner commented. “He was fresh from Europe and had only done jumpers, so the hunter ring was new for him. He’s got an incredible jump and amazing balance. He’s the most fun horse to ride. We’ve been taking our time and letting him learn his job and he’s really stepping up to the plate.”

Brittner made an impressive comeback into the show ring after welcoming her baby boy, Anderson, with husband, Skyler, just a few short months ago. “I’ve been riding for 10 days now,” she continued. “I’m really lucky to be surrounded by such a great team and such great horses. They helped me get my confidence back quickly. They’ve helped make the transition back to the saddle such an enjoyable and easy one. I can’t thank the Chestnut Hill team enough. All the accolades go to the team, because their support has been above and beyond.”

The $10,000 Valencia Saddlery USHJA National Hunter Derby – Junior/Amateur was split into two sections, with Parker Cliff and Limelight, owned by Joanette Korngold, taking top honors in Section A. Understudy and Ella Cate Duke were the champions of Section B. Mackenzie Greer had a pretty special final show as a junior. On Friday night of National Sunshine Series II at Desert International Horse Park (DIHP), she took the win out of 56 entries in the CPHA Style of Riding Championships – South aboard Lo Visto Van’t Hulgenrode.

“I just got him actually,” she said of the 11-year-old Belgian Warmblood gelding (Diarado x Colman). “I haven’t had much time to ride him since I’ve been back east. This is my second show with him and he’s actually my jumper. He’s supposed to take me up to the 1.40m and grand prix level but we decided before we do that he’s going to do my last equitation class. It’s a very new partnership and I couldn’t have asked for him to be any better.” Set in a jumper-style format, the prestigious final welcomed junior and amateur athletes to contend a first-round track. Riders with clear rounds and scores 70 and above were invited back to jump off, with 15 total returning for the tie-breaking round.

The time allowed was tight in the jump-off, forcing riders to kick it into gear, but Greer had her horse’s jumper talent and experience on her side. “You need to jump clear and time allowed is very important so he definitely helped me out there because he’s so careful and efficient. He has a huge stride which was amazing for some of the leave-outs in the second round.”

Greer has high hopes for her partnership with Lo Visto Van’t Hulgenrode. Prior to climbing the jumper ranks and heading towards grand prix events one day, she hopes to compete soon in the USET Talent Search classes as well with her new partner.

With this win under her belt she’s even more confident in her ability to achieve big things in her riding career. “It’s amazing because a lot of the equitation prepares you for the jumpers and this class especially,” Greer continued. “Being efficient, clear, and within the time but also making it look smooth and effortless is a big deal and plays a big part in the jumpers when you get to bigger jumps.”

As for how the win feels, Greer responded, “Very surreal because it’s my first medal final win. To end it on this note couldn’t have been more special.”

With a season ahead of her at DIHP, she plans to use the venue’s schedule to get to know her new partner even further, but to kick it off with a big win gives her all the confidence she needs to build her partnership. “They have made so many amazing updates and changes here,” she said of DIHP. “They’re making it feel so special. Especially with all these night classes; it makes it feel so important and it’s so nice as a rider to feel so celebrated.”