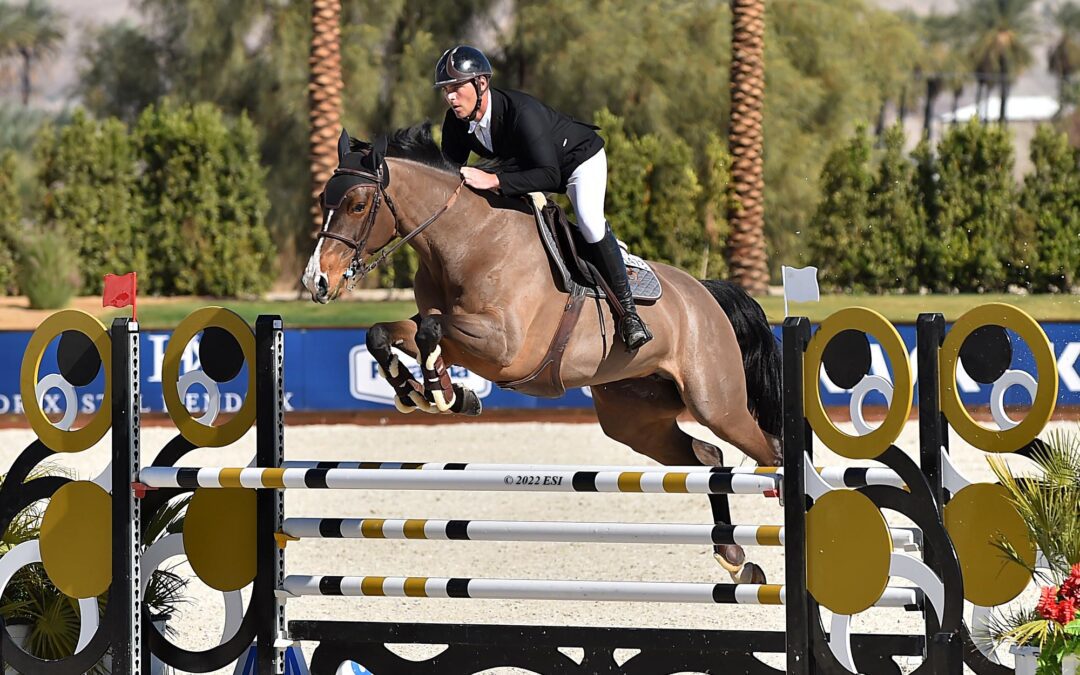 Thermal, Calif. – Feb. 11, 2022 – The Silver Oak Jumping Tour – Jump for Kevin Babington returned to Desert International Horse Park during Week IV of Desert Circuit after a successful running during the National Sunshine Series. A field of 20 decorated international athletes representing six countries made their way into the Grand Prix Stadium to nab the big win as the fastest clear round. In the end it was Sebastien Devrainne (FRA) and Dulcinee De Pience who overtook the competition for the top position on the leaderboard. 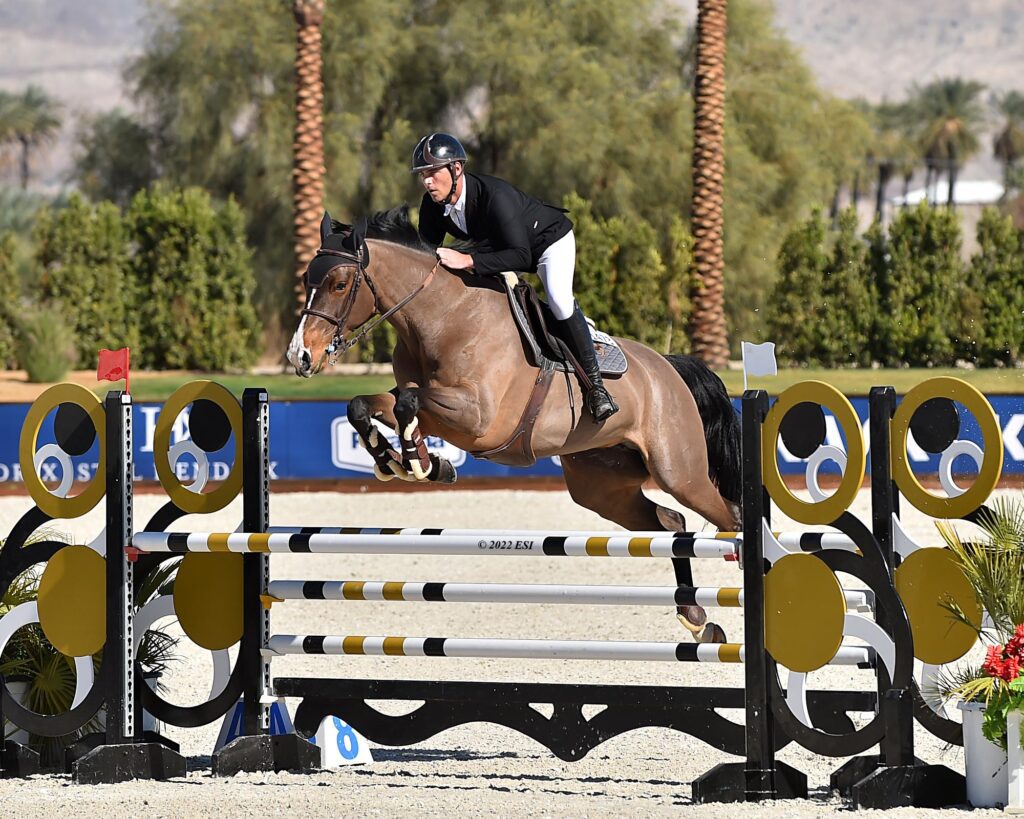 Olaf Petersen, Jr. (GER) set forth a track fit for the 1.20m competition, offering a difficult course to whittle down the field of athletes. The first clear ride was produced by the fifth pair in the order-of-go, the United States’ Tyra Cleary riding Hebron L. The second clear round came just four rounds later, when Wendy Krohn (USA) navigated a fault-free effort aboard Bushido. Eight additional athletes would add their name to the list of clear rides by the conclusion of the first round.

Devrainne (FRA) stepped in the ring aboard Leah Larson’s Dulcinee De Pience, a 9-year-old Selle Francais mare midway through the order of go. Devrainne and Dulcinee De Pience sliced and diced their way through the course, making sure to leave every rail untouched. Successfully putting in a clear round, their speedy time of 64.496 seconds was enough for them to shoot to the top of the leaderboard where they would stay for the remainder of the class, earning them the blue ribbon. Third to last to take to the ring was Mark Kinsella and Quality H, an 11-year-old Hannoverian gelding owned by Attache Stables. While Kinsella did his best to take the inside turns and numerous risks along the way, his time of 66.083 seconds was just shy of Devrainne’s time, placing him into the second place position.

Danah A. Zaman and O Calvin Klein SE, owned by Rose Sullivan, were last to try their hand at the course. Riding the 7-year-old Belgian Warmblood stallion, Zaman navigated O Calvin Klein SE to a clear round in 66.138 seconds, but were unable to beat both Devrainne and Kinsella’s times, leaving her to round out the top three. Following the conclusion of the Silver Oak Jumping Tour – Jump for Kevin Babington, the Whitethorne Friday Night Lights kicked off for the second time this season in the Grand Prix Arena. A total of 23 horse-and-rider pairs, both junior and amateur, took to the ring to vie for the championship title and get solid experience on DIHP’s largest stage. Paige Walkenbach and Dayle Fischer’s Quadro D’ag, a 17-year-old Selle Francais gelding, were first to jump clear in the class, setting the bar high with a score of 88. Bella Primavera and her own Carrico Sun, a 10-year-old Holsteiner gelding were 17th to navigate the ring, successfully answering the tests on course, but ultimately ended up just shy of Walkenbach with a score of 85, putting the duo in second place. Rounding out the top three was Audrey Carmody and her own Colany 9, a 6-year-old Holsteiner gelding, leaving Walkenbach and Quadro D’ag to take home championship honors.