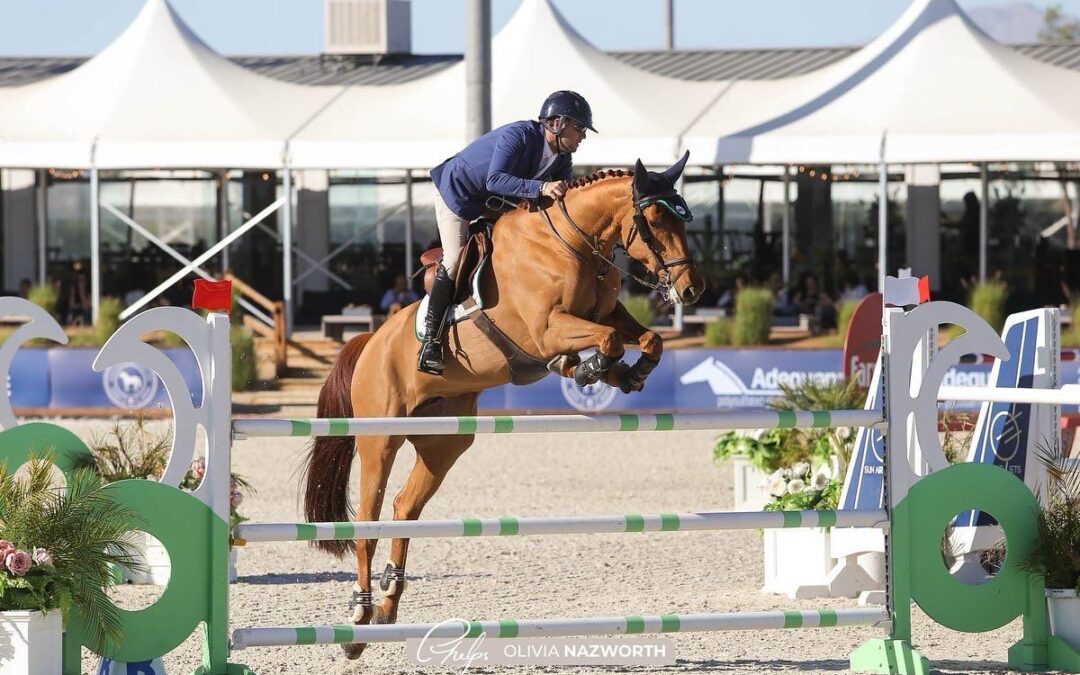 Thermal, Calif. – Feb. 9, 2022 – Desert Circuit IV kicked off Wednesday with the $5,000 Whittier Trust Welcome Speed in the Grand Prix Arena. Twenty-five entries came forward to test the difficult track built by Olaf Petersen Jr. (GER) and attempted to notch the quickest clear-round time to secure the win. Only nine pairs successfully navigated the track clear, and ultimately it was Ireland’s Mark Kinsella and Astrid De B’Neville, owned by Victory Four Sporthorse Ltd., who topped the field with a clear round nearly three seconds faster than any other entry. 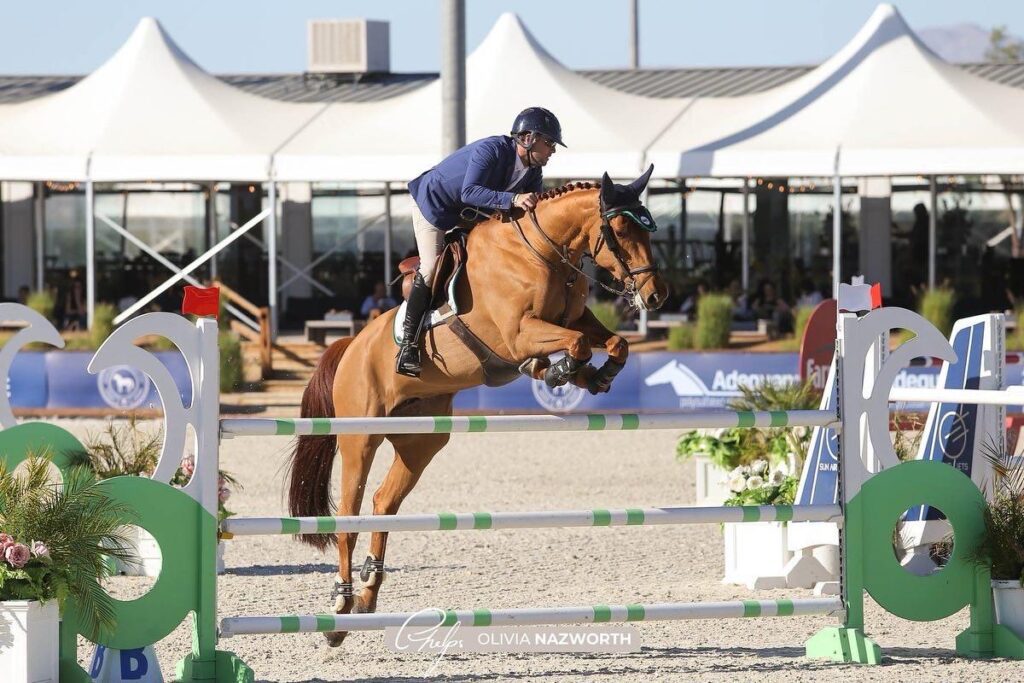 Petersen’s track included 12 obstacles, featuring a vertical-oxer double combination at fence four, a triple bar oxer at fence six, a double of verticals at fence seven, and a liverpool at fence twelve to complete the course. First to set the pace with a clear round was Sophie Simpson-Leckie in a time of 71.973 seconds with Adalberto Audi Scappino. Her lead held until the 12th entry stepped in the ring, when Nicki Mathen cleared the course in a time of 68.850 on her second mount, Last Romance. Kaitlin Campbell immediately shaved eight one-thousandths of a second off the leading time with Sun Warrior, but Sweden’s Hanna Mauritzson stepped in the ring several rounds later aboard Parkmore Lux, owned by Ritz Fuente LLC, and dethroned both Campbell and Mathen when she sped to a time of 67.005 seconds. Kinsella took to the course with the 12-year-old Selle Francais mare and, as 22nd in the order of go, knew what he had to do to overtake the lead. He took direct approaches with as few strides as possible between each element of the complex track, rolling back to fence three in only eight strides, cutting back neatly on the oxer at five and taking a direct path to the triple bar at six. Kinsella guided the mare tightly and carefully around the far end of the ring to clear fence eight and again at fence eleven before opening her stride and galloping over the final oxer to steal the lead with an impressive time of 64.125 seconds. Several other pairs jumped the track clear, but could not catch Kinsella’s blazing fast time. Campbell made another effort to win back the top spot aboard the SWS Training & Sales entry Armentos, but in a time of 67.685 seconds she earned herself third place as the class drew to a close. On the course:
“I thought it was a really good course. [Astrid De B’Neville] is naturally pretty fast, so I just tried to be a little bit neat everywhere. She’s going to go in the [$25,000 Farmvet] Grand Prix tomorrow so I didn’t want to go too fast. She seems to cover the ground and she’s very competitive herself.”

On Astrid De B’Neville:
“Her name is Astrid. She’s a 12-year-old mare. She belongs to a client of mine from Canada, Caroline Di Victtorio. They’re great supporters. I started riding her the back-end of last year. We’re just really starting to gel our partnership together. She’s jumped a couple of grand prixs now. I think that’s kind of the way for her to go for the rest of the circuit. I’ll aim her at the $25,000 Grand Prix tomorrow and Saturday’s $40,000 Grand Prix. That’s what she should do.”

On Mark’s goals with Astrid De B’Neville:
“She had off last week. During Week II, I did the same thing. She was placed in the [$2,500 Whittier Trust] Welcome Speed. I did a night class, the [$25,000 FarmVet] Grand Prix. So I’m just trying to keep my schedule the same.”