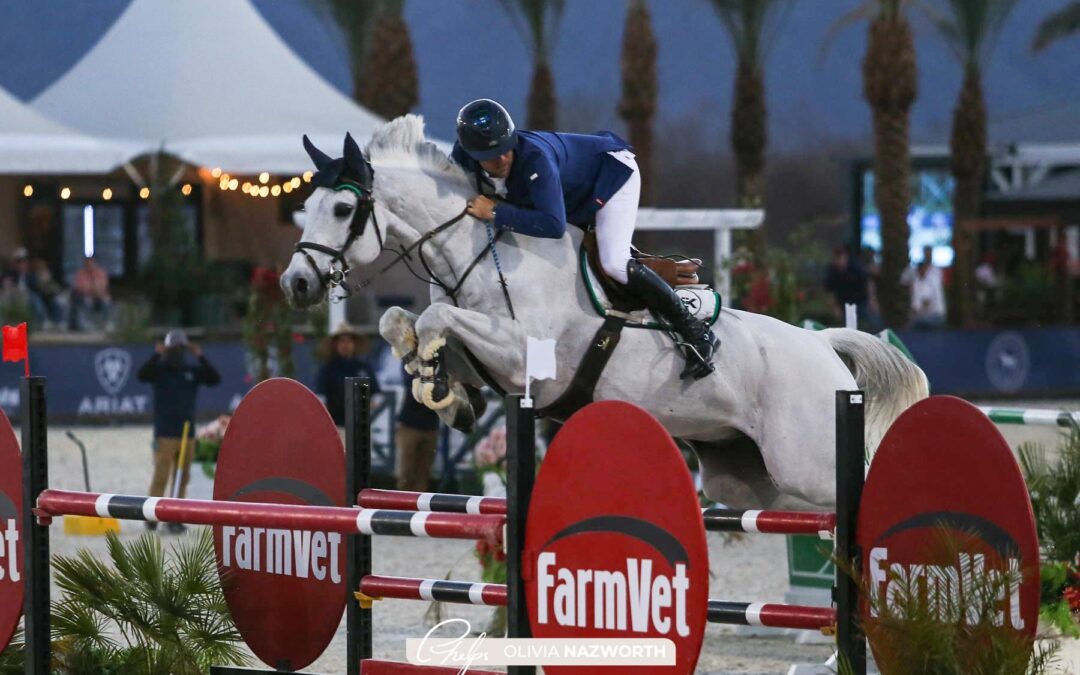 Thermal, Calif. – Feb. 10, 2022 – Show jumping athletes went head-to-head Thursday afternoon in the $25,000 FarmVet Grand Prix. Over a track set by Olaf Petersen Jr. (GER), 46 horse-and-rider combinations attempted to conquer the first round course for a ticket to the jump-off and a shot at the lion’s share of prize money. Ultimately taking the top spot was Ireland’s Mark Kinsella who piloted Doraindo to the quickest clear effort of the afternoon. Following a challenging 13-effort first-round course, just eight of the 46 starters earned a spot in the jump-off, including Karrie Rufer (USA), Jessica Gleason (USA), Alec Lawler (USA), Kinsella (IRL), Charlie Jones (GBR) and Kyle King (USA). Kinsella and Rufer would both represent two mounts over the tie-breaking track, giving them an increased chance of taking home the win. The track featured many challenges for competitiors, among them a two-stride featuring a triple bar oxer to a careful vertical, plus a liverpool oxer, a double of verticals, and a vertical-oxer double combination. 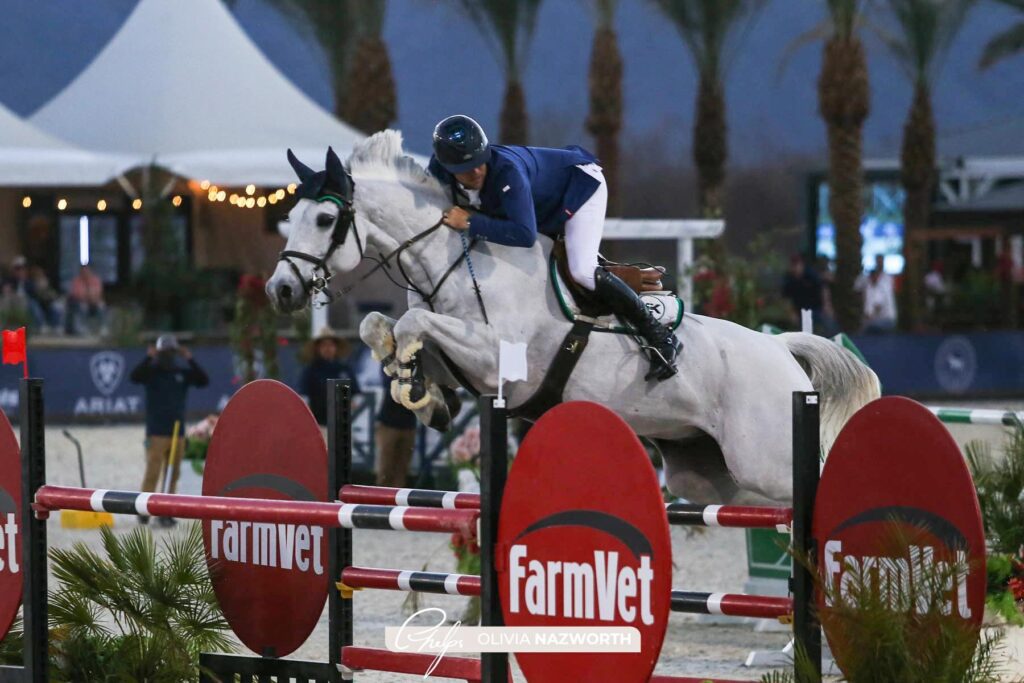 First to tackle the second round course, shortened to seven obstacles, was Rufer aboard her first mount, Mai Tai 2. The pair would roll just one rail to the ground and set the pace at 45.97 seconds. Kinsella immediately followed with his first mount Astrid de B’Neville, also acquiring 4 faults on 44.11 seconds. Jones was next to contest with Gerko III Van de Zeilhoek. A speedy time of 42.11 seconds would impress the crowd, but an unfortunate rail would keep them out of contention. Riding her second mount, Stern Dei Folletti, Rufer would become the clear-round pathfinder on 43.17 seconds. Three others would attempt to overtake Rufer’s lead, but 4 faults on the scoreboard would keep them out of the running until Kinsella stepped back into the ring as the last to go on Doraindo. Kinsella rode a tactful course, slicing and dicing his way to the finish line in 41.35 seconds without knockin any rails to take home the win. Kinsella, fresh off his win in the $2,500 Whittier Trust Welcome Speed, and the 14-year-old Dutch Warmblood gelding have only been partnered together for three weeks. As only their second grand prix together and their first time riding a jump-off together, Kinsella was thrilled with the winning result, noting the talented gelding’s desire to win. He’s aiming the horse at FEI competition for the second half of the circuit, which resumes on February 23 after a rest week for the horses and riders. Kyle King and Coffee To Go

Show jumping competition at the Desert International Horse Park will continue Friday, February 11, with the 1.30m Open Jumpers taking to the Grand Prix Arena at 8:00 a.m. PST. The feature class on Friday, the Silver Oak Jumping Tour – Jump for Kevin Babington 1.20m will take place in the Grand Prix Arena right before Whitethorne Friday Night Lights welcomes back equitation riders for the second time this season.

On his jump-off strategy:
“I watched Karrie Rufer go before me and, I know her horse is extremely fast, but she chose to go around the island back to the combination which I thought was a very wise decision because the angle on the way in, if you took the inside turn, looked to be not nice or you needed a super experienced horse. I set off to fence one and went in seven strides to two. After that it was really running; I ran around the island to the combination a little quick, and I was tight back to the vertical. I did ten strides to the green oxer and I was very efficient in my turn to the second to last, and I did 11 strides back to the last jump. Luckily it all paid off and it was fast enough.”

About Doraindo:
“This horse is owned by SWS Training & Sales. I got him only three weeks ago and this is only my second Grand Prix with him. I did him in last week’s $25,000 [FarmVet] Grand Prix under the lights and he was really good; we had one down but he jumped really well. Today was the first day I ever rode a jump-off with him. So I couldnt be happier with the horse and I appreciate the people letting me ride him. It’s great for me. He’s a beautiful horse. He’s beautiful to ride, he’s kind on the eye, and he’s a great horse which I really love. He’s not overly big or overly small and he’s just a good guy. He feels like he wants to win, especially tonight, and he’s very competitive with himself. I like that; that’s more my ride. He wants you to let him be and let him do him and it seems to get good results.”

On adapting to different horses:
“I suppose in this business you have to adapt and, especially for young professionals like myself, we have sales businesses and horses come in and out on any given day. It comes with the job; you have to be able to do it. Sometimes it works out, like tonight, and other times it doesn’t, and you have to take a little bit longer. This guy has a lot of experience already – Kaitlin Campbell had a lot of success with him – so he knows his job.”

The plan for Doraindo going forward:
“I’m going to do him Saturday in the $40,000 [Adequan] Grand Prix. He’ll have time off during the off week and we’ll try to bring him back to FEI for the second half. Then we’ll see. I like to use the circuit for newer horses to build partnerships with them. I think it’s very influential that you have time here that you can work on little things. Obviously every day everything doesn’t always go right so it’s nice to be able to come back to the scene of the crime and fix it. I’ll just take my time with him over the second half of circuit and try to do some FEI classes.”

On DIHP:
“I love coming here. Our horses came down in October and they stay all the way through until the end of circuit. Even since last year, which was a short time ago, the changes they’ve made to the place and the investment they’ve put into it are amazing. I’ts such a horse friendly place. I’ts great to be here at the Desert Horse Park. People are so nice. We love spending our time here.”