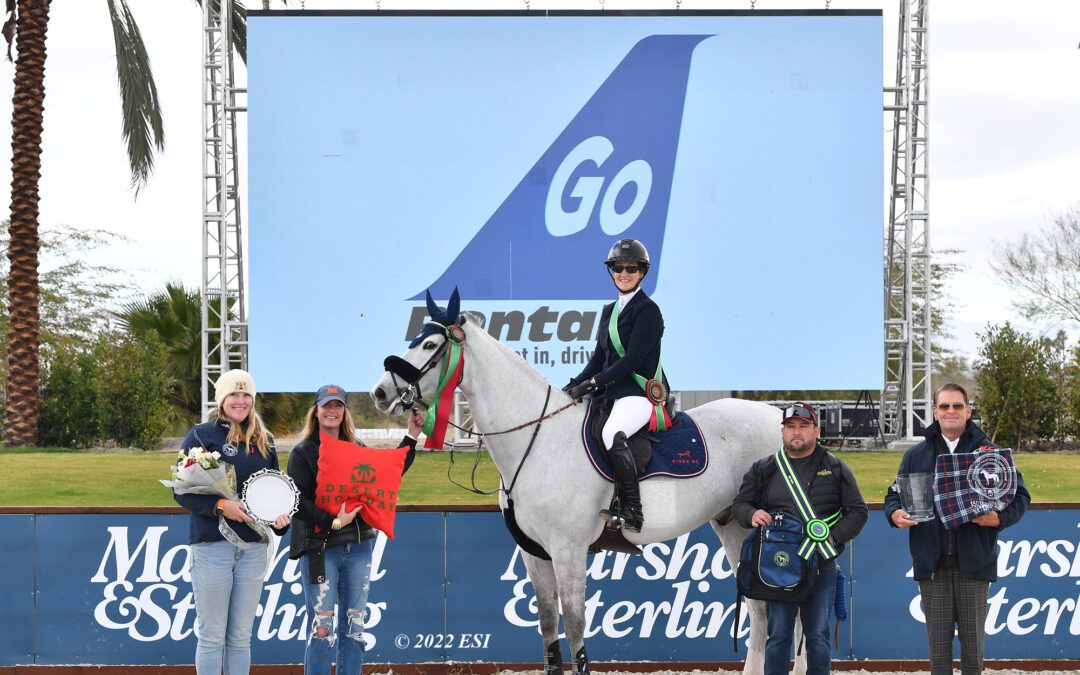 Mandy Porter and Cadeau Z keep getting better and better.

During the National Sunshine Series, they rode to top-five finishes in each of the national grand prixs, but during week two of Desert Holiday, they made it to the winner’s circle in the $50,000 Go Rentals Grand Prix on Sunday morning. 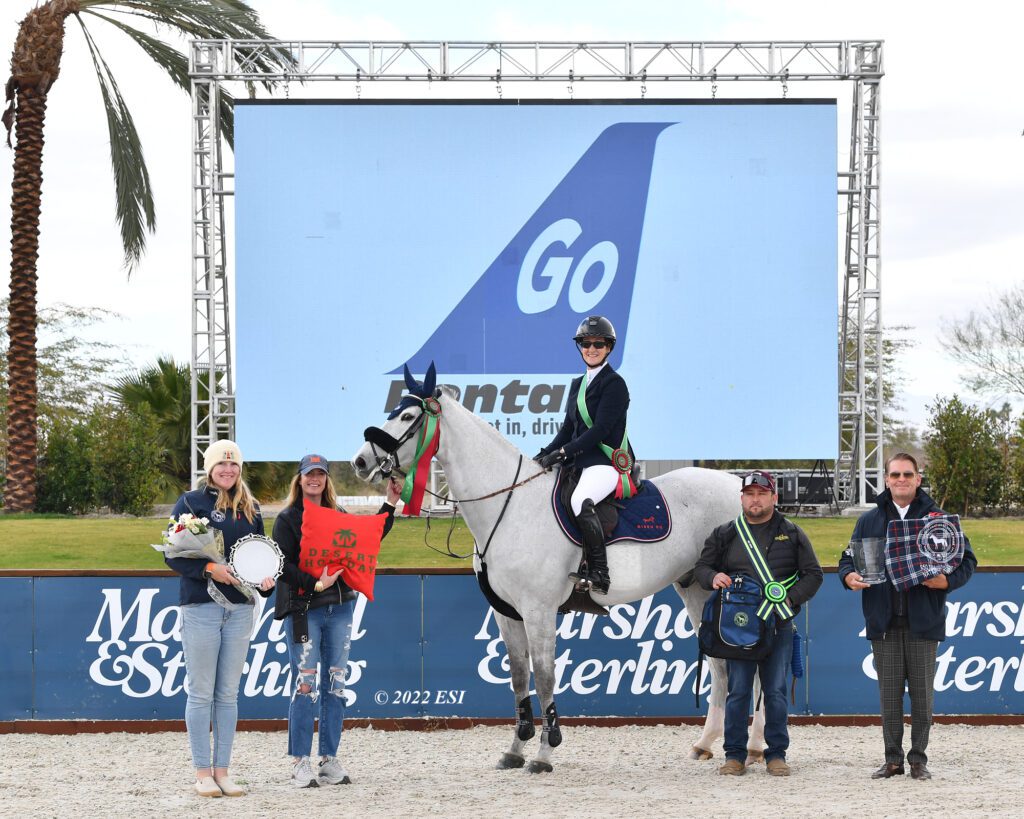 “We’re just really getting to know each other better and better each time out,” Porter said of her relationship with the 9-year-old Zangersheide gelding owned by Risen EQ Holdings LLC. “Today we were able to go a little faster and a little bit more in unison.”

Porter was one of five to jump clear over Alan Wade’s track in the first round. She was the final clear effort, putting her in pole position as the jump-off arrived. Karrie Rufer held the lead at the time with Stern Dei Folletti, owned by Morning Star Sporthorses, but Porter did what she had to do, shaving only one-tenth of a second off the leading time.

“After watching Karrie I didn’t really think I was going to be faster than she was but this horse has a heart of gold,” Porter continued. “He’s such a trier; he was better in the jump-off than in the first round even. I’m super lucky right now to have really great people that are backing me. It’s a lot of fun. Big thank-you to the owners.” The horse was paired with Porter from the same team that paired her with her mount Milano, with whom she won the $1 Million Grand Prix right here in Thermal in 2017. “It’s a little ironic,” she said of the match-making. “I called Enda Carroll who we got him from at Ashford Farm because that was where I got Milano, a really good horse I had a few years ago. He said, ‘I think I have the perfect horse,’ and he put it all together.” “It’s exciting,” Porter reflected on her win. “I haven’t been back in the grand prixs here in a little bit. It feels like ages, and after watching [the CSI5* Grand Prix] last night it gets your blood going and gets you excited. The atmosphere here is really special now, so it’s a lot of fun to ride in this ring and feel special.” Ashlee Bond had a hugely successful week of jumping, taking the win with Team Helios in the Major League Show Jumping Team Final, taking third place individually for the MLSJ season, and then capping it off with a win in the $30,000 Vogel 1.40m Open Classic.

Earlier today all the way in Geneva, the USA’s McLain Ward and HH Azur captured the Rolex Grand Prix of Geneva. The news must have gotten to HH Elmo all the way in California, because he wanted a win to keep up the HH namesake as well.

Riding to scores of 86 and 84 for a combined 170, the win in the $10,000 Amberway Equine Amateur-Owner 3’6” Hunter Classic went to Lindsay Maxwell and HH Elmo. The horse has been unstoppable in hunter action since the fall at Desert International Horse Park (DIHP), and the pair will certainly be top contenders as the season continues. “I’ve had Elmo for about four years now,” Maxwell, of Los Angeles, CA, said. “The first couple years I did him in grand prixs in Europe. He was my first big two-star and three-star horse, and I decided to take a break from the jumpers. He’s my heart horse and I thought I’d see how he’d do in the hunters.

“He’s obviously taken to it very well and very quickly; he loves doing this,” she continued. “He’s a wonderful horse, sweet as can be. He has a big personality. He loves attention, he knickers every time I walk in the barn. All of mine are spoiled but sweet spoiled. He’s very social, loves to see everyone come in and out.”

Maxwell trains with Nick Haness, who has piloted HH Elmo to multiple major hunter wins so far this season, including in the $100,000 WCHR West Coast Hunter Spectacular in November. The horse’s talent and previous jumper background gives Maxwell plenty of confidence as she takes on the Amateur-Owner hunters with him in the desert.

“Obviously having done 1.45m-1.50m class on him it’s always nice to have that scope, especially in a big, beautiful ring like this where the course designer gives you long gallops and long bending lines,” she continued. “Having jumped much bigger jumps in a different way from this, I have all the confidence in the world in him that he’ll get me to the other side. The plus is that he moves great and jumps great at this height too. I’m really lucky to have him.”

As a southern California resident, Maxwell looks forward to coming to DIHP every year.

“We absolutely love it here. Every year we’re so excited to get here and so sad to leave. They make such huge improvements every year, and it’s such a spectacular facility. The footing is consistently fantastic, the jumps are beautiful, and management does a super job, from the ring grew to the in-gate guys to upper management. Everyone just does a great job. We’ll be back here every year,” she concluded.