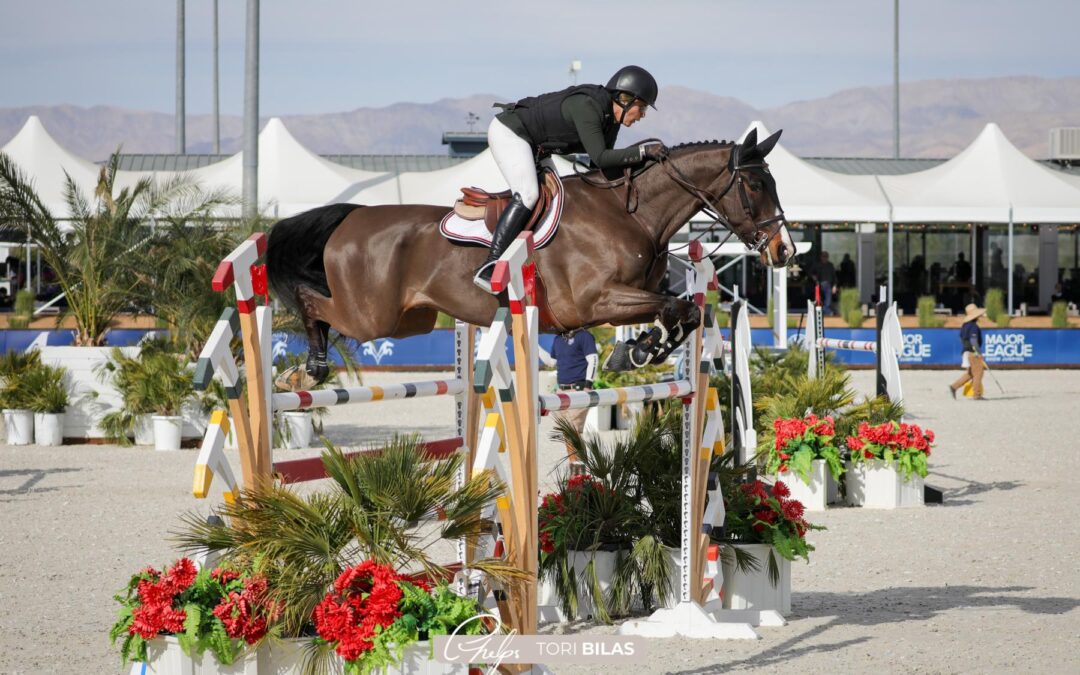 Thermal, Calif. – Jan. 28, 2022 – International athletes took over the Grand Prix Arena again Friday afternoon at the Desert International Horse Park (DIHP) for the $36,600 TALUS Speed 1.50m CSI3*, set over a course designed by Mexico’s Manuel Esparza. Forty-one entries tested the speed track one by one, testing their gears and attempting to overtake the lead as the quickest fault-free round. In the end it was Lindsay Archer (USA) aboard Jarpur who stole the spotlight with a blazing fast clear round that couldn’t be caught.the United States’ Lindsay Archer and Rhys Farms, LLC’s Jarpur to come out on top. 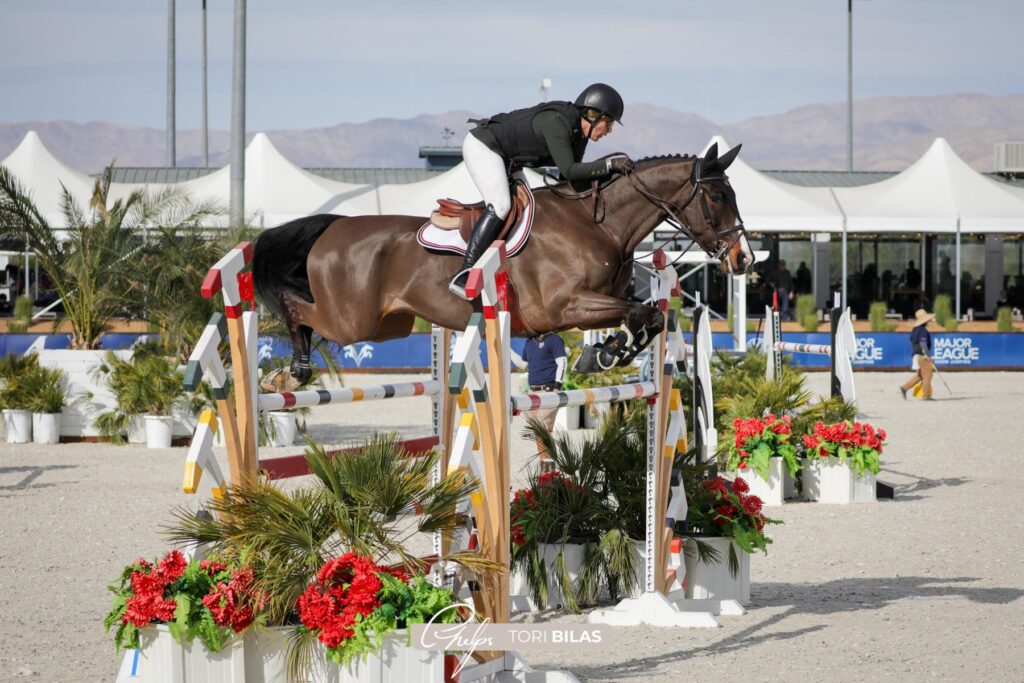 The course wound tightly around the entire Grand Prix Arena, featuring 12 obstacles including a vertical-oxer double combination, an oxer-vertical double combination, a double of verticals, and numerous places for tight turns and bending lines to take out strides for quicker times.As the pathfinder for the course, Keri Potter (USA) and Ariella La Sirene suffered an unfortunate rail on course before crossing the timers in 76.059 seconds, leaving the door open for those to follow. The first clear effort would be seen by Saree Gordon-Solonki just three rounds later, piloting Azuro 108 to a clean time of 78.19 seconds. Her lead was short lived as Canada’s Ali Ramsay slipped into the leading spot just one round later aboard Bonita VH Keizershof Z. The quick duo flew through the timers in a swift 72.38 seconds, shaving over six seconds off of Gordon-Solonki’s leading time. Archer (USA) and Jarpur entered the Grand Prix Arena next and immediately slipped into the top spot, besting the time by over one second to finish in 69.01 seconds.

Archer opted for nearly all the inside turns the difficult course had to offer, sliding inside the combination from fence one to two, then pulling off a sharp inside turn back to the oxer at fence three. A tight rollback to a slice on fence nine gave her the perfect approach to finish the course in a speedy fashion and overtake the lead. Though the remaining 33 horse-and-athlete combinations would put forth a valiant effort at unseating Archer, none could quite match her finesse around the course. In the end, her stellar round with the 13-year-old Belgian Warmblood gelding would be enough to secure the first place finish. Ireland’s Nicky Galligan came close, leaving all of the rails intact aboard his own Javas Miss Jordan and notching 69.12 seconds on the clock to ultimately claim second place. Rounding out the top three was Cassio Rivetti and Kayack, owned by HF Farms LLC, riding to a time of 69.26 seconds. Friday evening welcomed juniors and amateurs to the Grand Prix Arena as it played host to a new class at DIHP, the Non-Pro Gambler’s Choice 1.20m, benefitting Manes for Movement. Manes for Movement is a nonprofit therapeutic riding center providing equine-assisted therapies and activities to children and adults with disabilities and special needs. Twenty-four junior and amateur athletes participated in the class under the lights, all eager to have a great time for a good cause. Riders were allowed to design their own track, over which each fence jumped was worth a set number of points. Riders attempted to earn as many points as possible in the time allowed. Once riders completed their track, they were given the option to try their hand at the “joker” fence, a taller vertical that was worth 200 bonus points. After an exciting class that kept the crowd on their toes, Tanya Jarvis and Ilan, owned by SWS Training and Sales, emerged as the leading pair for their impressive total of 1110 points, including clearing the coveted “joker” fence.

On her round:
“[Jarpur] doesn’t love the far end of the ring so I was a little bit forced to come off the left lead and not the right, which definitely made me a bit slow from fence one to two. But then I saw a nice flowing stride to fence three, and he jumped that great and was on a great rhythm up to the double combination. I only have one horse, so I was really trying to set him up for Sunday’s [$138,600 1.55m Grand Prix CSI3*] and not go crazy today. So I chose to go around to the Marshall & Sterling vertical and caught it on a nice gallop. The double in the middle of the ring came up really nice. My horse shifts right, so I had to be a little careful not to tell him too soon that we were going to go inside the end jump, but he covered that great. I caught a really nice forward stride into the five-stride. He followed me great there. We had a nice smooth rollback to the liverpool. I don’t get stuck on a number with him because he has a bit of an awkward stride, but I ended up on the eight strides everyone was doing to the Bridgeport fence. He’s so careful; I just ran down to the double. He’s so clever he knew not to think he was done and really paid attention to the last and covered that really well.”

On Jarpur:
“In 2018, my owner was amazing and said ‘Let’s go find some horses and get you in that ring.’ I had a great horse with her that she had owned before I worked for her, and we won four out of five grand prix classes and then had to be retired. So we went to Europe looking for a good horse for me. He was 9 years old at the time. He didn’t have a ton of experience, and he was a little quirky. We thought he would be a nice 1.45m horse and he’s so much more than that. He’s blown our expectations out of the water. He’s for sure my horse of a lifetime.

“He kind of shuffles. He doesn’t have a big gallop. It’s really fast and it’s not a short stride but it’s not a big rangy stride. He’s a quirky horse. In one moment I can be going different directions, so it’s not a horse that I easily ride numbers on. I have to be a little bit on the fly with him and be willing to do what’s working in that moment. But I know him well enough to  have been able to just trust and know that it’s going to work. I know him literally like that back of my hand at this point. We trust each other. I know if I tell him to go, he’s just saying ‘How fast?’ and ‘Where to?’

We joke in the barn that he ‘poofs’ over the jumps. It’s not your normal, big rangy horse. He’s his own style and he’s an incredible horse. He’s the smartest horse I’ve ever ridden. I’m just grateful to have him everyday. It doesn’t matter if he’s fresh or tired, when he walks through that ingate, he knows what the plan is and he knows that he wants to get to the finish timers and not have a jump down. It’s the most focused, organized, intense animal when you walk in the ring. He knows exactly what his job is, which takes a lot of weight off your shoulders. We joked that he was a children’s jumper because of the way he cantered. He just shuffles and then jumps. But everytime the jumps got bigger, he just ‘poofed’ up higher. He’s just a character. It’s his own way, but he knows it. He believes in me. He always performs when he comes into the ring. If a jump comes down. It’s because there’s something wrong. And if he’s feeling good, he jumps clear everytime.”

On Jarpur in the barn:
“My husband jokes that in nature he would die, that he would spin and hit his head on a tree and knock himself out. He’s just scared of life. But when you walk in the ring, there’s nothing that scares him. He’s a total character.”

On DIHP:
“I’ve been coming here since it opened in 2007, and the work that they’ve put into this place, especially in the last six to eight months, you can’t find a better grand prix ring and grand prix warm up ring than this. It’s absolutely incredible. The footing is great, and my horse is so sensitive to the ground. He just gets better and better here now on this ground. It’s beautiful to look at. Things are permanent. You feel like we get to stay and enjoy it. It’s just going to keep getting better and better.”