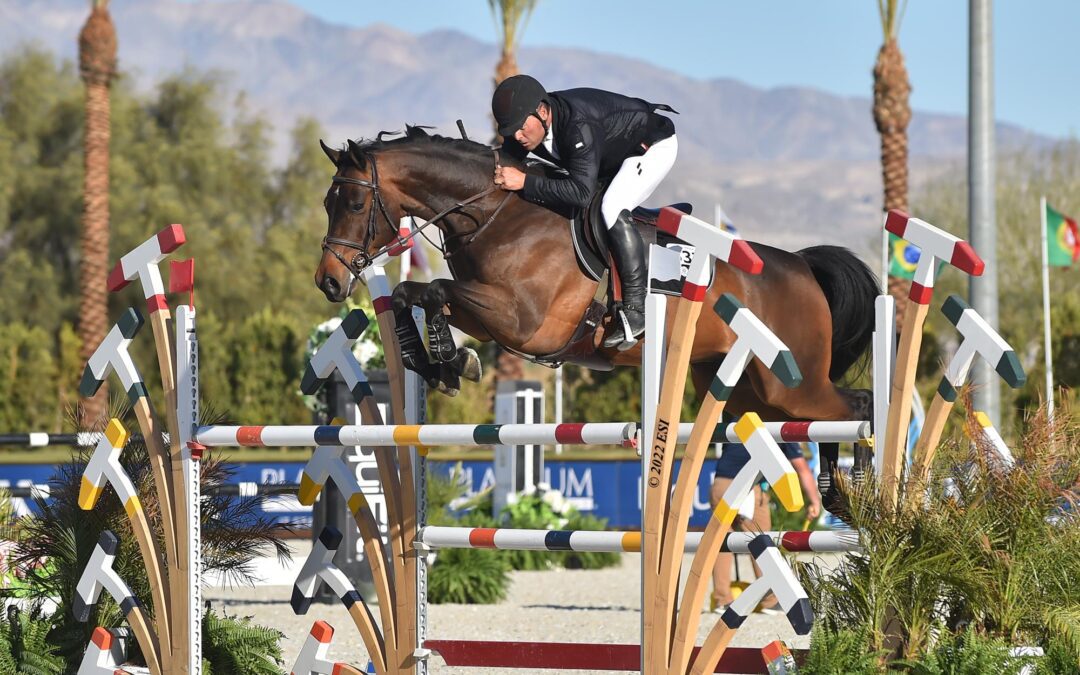 Thermal, Calif. – Jan. 23, 2022 – The Grand Prix Arena played host to the final jumper class of Desert Circuit I, the $10,000 Interactive Mortgage 10 & Under Futurity Series 1.35m. Open to all horses aged 10 and under, the coveted class offers incredible prize money in an effort to identify the top young talent in the jumper ring. The series debuted in November of 2021 and will feature a class every week of Desert Circuit. With 24 entries, including top athletes piloting their up-and-coming mounts, the class was competitive, but in the end it was Kyle King who scored the win with Ittolo and second place with Gipsy De L’epinette. Course designer Ken Krome set a track of 12 numbered obstacles, featuring a vertical-vertical-oxer triple combination, an oxer-vertical double combination, and several long bending lines across the expanse of the Grand Prix Arena, asking tough questions of the experienced riders with their less experienced mounts. Riders who navigated the first round clear remained in the arena to jump off over a six-obstacle short course. Seven pairs navigated the first round clear and advanced to the jump-off.

Susan Artes was first to contest the track and pulled out a double-clear effort with Alix Fargo’s California Sunshine, a 9-year-old Bavarian Sport Horse mare, in a time of 34.653 seconds, which would eventually place her third. King took to the ring fourth in the order of go with his first mount I Zappo, owned by Greg Tomb, but pulled an unlucky rail at the final fence in the first round to ultimately finish 12th. Knowing he had two more attempts at securing the top spot, King returned midway through the order aboard Kerri Volek’s Ittolo, a 9-year-old Dutch Warmblood gelding. The rider, who recently cracked the world’s top 100, piloted Ittolo to a clear first round, then laid it all on the line in the jump-off, blazing across the track and setting a new time to beat in the jump-off of 33.219 seconds. 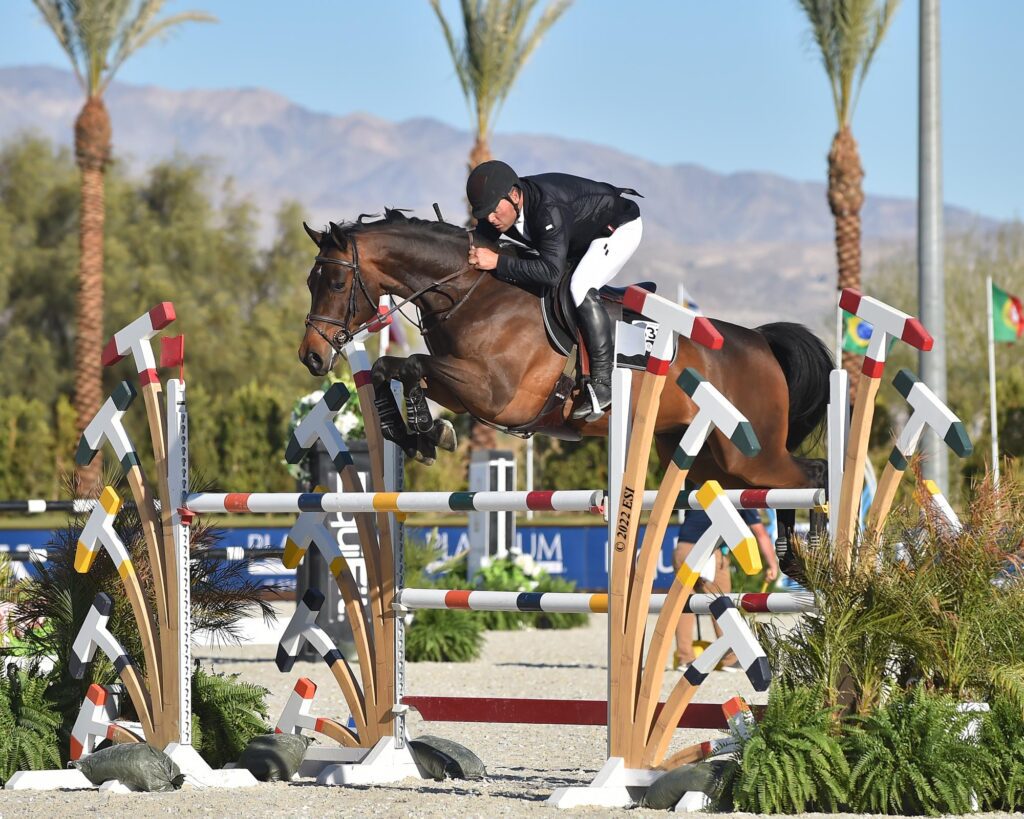 With nine entries still to come behind King, each attempted to jump clear and catch his quick time, but rails fell for several entries and the only other double-clear effort fell two seconds short. King returned as the last to go on a horse of a different color, the 10-year-old paint Belgian Sport Horse gelding Gipsy De L’epinette, and earned another shot at the jump-off track to challenge his own time. His third mount was just over one second off the pace, but still managed to slide into second place overall, securing King the top two placings in the class.

Developing Ittolo has been a balancing act for King, who strongly believes in the horse’s ability but has run into roadblocks along the way to success. Having already won a class together, King initially had the $40,000 Go Rentals Grand Prix in mind for Ittolo during Desert Circuit I, but opted instead for the $10,000 Interactive Mortgage 10 & Under Futurity 1.35m to keep building his confidence. Both Ittolo and Gipsy De L’epinette are horses King sees as his next generation of top mounts.

On his plan for the course:
“Ittolo is a young horse of mine that I’ve been kind of going up and back down and up and back down with. He’s got a ton of ability and lacks a little bit of focus for some reason in this arena. He’s struggled here in November a touch. Then he got good; he actually won a class. And then he [was injured], so he missed the whole second half of November. This week he’s been a little bit rusty and shaped not the way I want him to be. I was going to put him in the Grand Prix, but I put him in this class instead. So I was very happy to go clear, and then, with that particular horse, I just wanted to put the pedal to the metal and let him just focus on the jumps a little bit. I made the right call. I did the Welcome Speed on Thursday and then I scratched yesterday, and it worked out because sometimes you have to go back down to go back up again.”

On how the Interactive Mortgage 10 & Under Futurity Series benefits his horses:
“Rollo [Ittolo] is a really neat horse. The other horse, Gipsy – the paint horse that’s owned by Spruce Meadows – I’ve had for a few years. He’s a very special horse and I have really high hopes for him. He’s a real character. Both those horses are characters. They’re kind of my next generation grand prix horses, so this is a great division for me to get the season rolling and get them in the kind of feel of a grand prix but it’s not quite a grand prix. Thanks to Interactive Mortgage – it’s really welcome to have this. I especially like that it’s in the Grand Prix Arena. This series is great!”

On DIHP:
“This place is top notch – I base out of here. This is my second season, and I base right at the horse park with my whole operation. I feel like it’s my personal playground. I get a little upset when everyone shows up to horse show, but it’s great. I don’t know anywhere else where you can train like you can here. We have the trails and we have all these different services to work on. Actually just outside the gate there, in those mountains, I found some really good trails where I can work my horses in the mountains. I don’t know where you can get a horse any fitter and more ready for competition then right here. What they’re doing now with how they’ve dressed the main ring up and improved the footing, it’s amazing.”