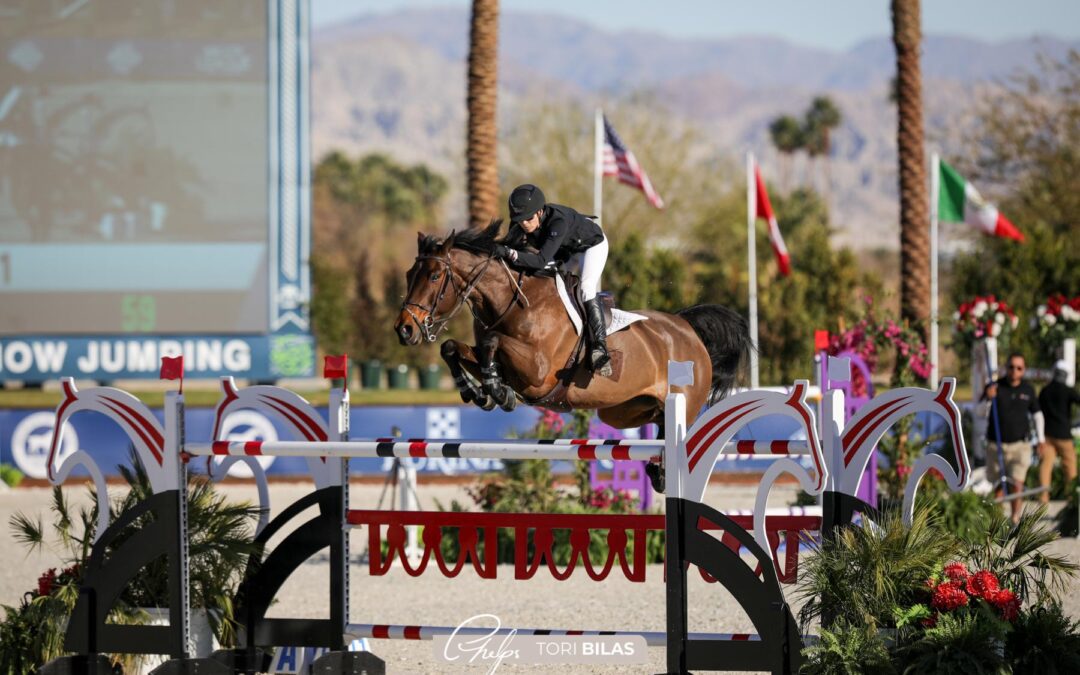 Thermal, Calif. – Jan. 30, 2022 – Show jumping action reached an exciting peak during Desert Circuit II Sunday with the $138,600 Purina 1.55m Grand Prix CSI3*, the first international grand prix of the season. Under the bright sunshine of the California desert, 34 entries put forth their best effort to take home the biggest title of the week and the lion’s share of the prize money in the coveted class. At the conclusion of the class, it was the United States’ Keri Potter who prevailed and topped the field to take home the victory riding Hannah Loly’s Quitana 11. 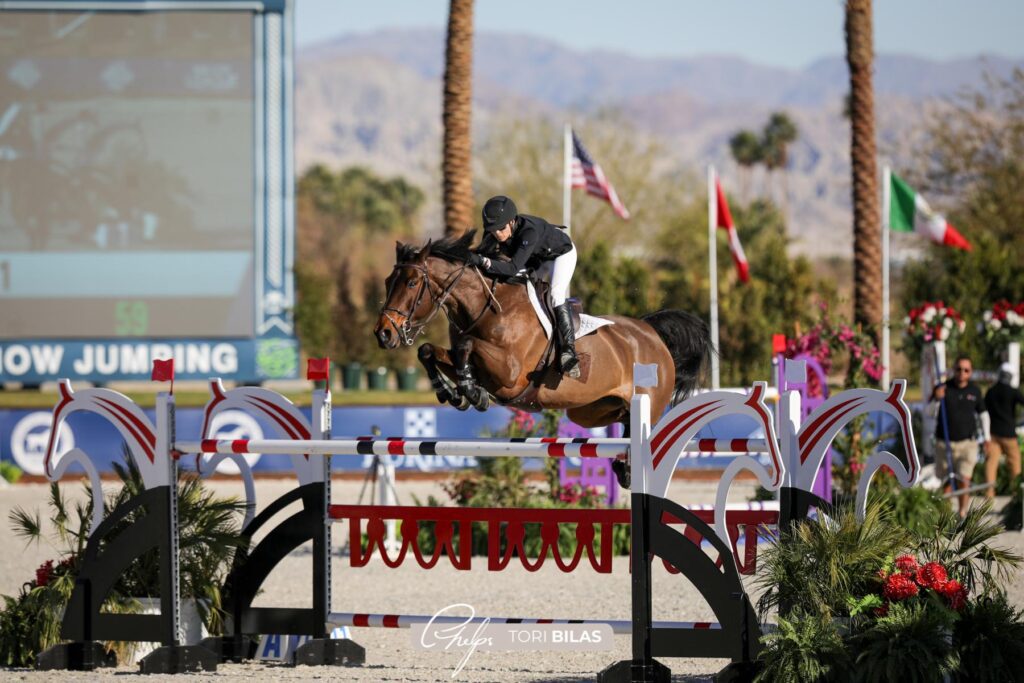 Manuel Esparza (MEX) set the track for the feature class of the day with the goal to challenge the horses and athletes beyond what they had seen up to this point in the circuit. Just seven pairs rose to the challenge and jumped the first round clear and within the time allowed. The course presented a variety of challenges, including a vertical-oxer double combination and an oxer-vertical-oxer triple combination, all set at the 1.55m height.

The class began with several four-fault rounds, proving the course would present challenges but not appearing impossible to navigate clear. As the fourth athlete in the ring, Karl Cook (USA) scored the first clear round of the afternoon aboard Signe Otsby’s Ircos IV. Ireland’s Nicky Galligan and Javas Miss Jordan followed immediately after, guaranteeing a jump-off with another clear round, but hearts fell as it was announced Cook was eliminated due to use of illegal hind boots. With Galligan as the only clear, fellow countryman Conor Swail stepped into the ring on his second mount, Vital Chance De La Roque, letting the gelding show off his spunk around the track and notch a second clear to reinstate the jump-off. Joining them for the jump-off would be Erin Davis-Heineking (USA), Ali Ramsay (CAN), Alec Lawler (USA) and Potter who qualified both her mounts. Alec Lawler (USA) and For Gold

Galligan set the pace through the eight-effort jump off track, which included sweeping turns through the expansive Grand Prix Arena as well as the addition of a new oxer as the final fence. He piloted Javas Miss Jordan through the difficult track to an eight-fault finish, crossing the timers in 46.12 seconds. Moving up in the order of go to account for her two mounts qualified for the jump-off, Potter and Ariell La Sirene laid down a stellar round to put forth the first double-clear effort of the afternoon in a quick time of 39.89 seconds. Davis-Heineking, Swail and Ramsay each tried their hand at the tricky track next, but each knocked rails on course, leaving them out of contention for the top spot. Returning next with her second ride Quitana 11, Potter had the advantage of knowing the ins and outs of the course as she attempted to unseat her own lead. The crowd was on the edge of their seats as she sliced and diced her way around the arena, proving she was the sole athlete to beat as she notched a double-clear ride in 37.40 seconds to take a two-second lead over herself with Quianta 11. As the final rider on course, Lawler put forth a valiant effort to take the win away from Potter, but fell just short of her swift finish as he navigated a clear 38.59-second round with his own For Gold. Their performance was good enough to earn second place honors, while Potter finished out the class with the win aboard Quitana 11 and third place with Tres Palomas’ Ariell La Sirene. On the jump-off:
“[Quitana 11] is just a very fast horse. She won the 1.40m on the first day here. I had changed the bridle today because I had actually been getting run away with the first day. So, the first fence, I just chose to really gallop. I left one out compared to my first horse that I went on because I knew I could; she has a little bit of a longer stride. The seven strides to the combination, I really had to hold because it was a funny angle jumping into that combination. And then after that, I kind of just let ‘em rip a little bit. There were about 20 strides and you have to gallop to the next one. And then turning back to the vertical I knew that I had to be a little bit patient there so I could roll back to the oxer and cut across that. Again, just let ‘em rip to the last fence and just stay tall, organized, and let them gallop. She’s so fast. You really don’t have to think ‘go fast’. You just soften the reins and let it happen. I don’t think I’ve ever ridden a horse as fast as this one. There are very few that are faster than she is. She’s unorthodox in the way she goes. She’s figured out a way to get herself out of situations. Over the years, and today, I think you can challenge her that way. When I challenged her, she rose up to the occasion.” On her first impressions of Quitana 11:
“I loved how honest she was. Hannah [Loly] wasn’t super experienced at the top level and I thought this was a great learning horse, but also when it’s done right she can jump a clear round. I like the feisty ones. I taught Hannah for so many years that she kind of rides what I like as well. I just had this feeling that they’d get along. The trial of the horse was pretty interesting. Hannah was getting run away with but we both had smiles on our faces and were saying, ‘I think we can make this work!’ Over the years, she’s adapted to our program and has gotten better and more rideable as we work with her. I dealt with a lot of horses that were a little bit unorthodox like she is and I thought that I had the confidence that we could work together and make a change. I feel like she was already a good horse but she’s become better and more rideable over the years. She’s just an awesome horse.”

On Quitana 11 in the barn:
“She is pretty chill. If you’re not pointing her at a fence you have to wear spurs. She loves trail rides. She’s very friendly. She’s our ‘matriarch’ of the barn.”

On the rest of the circuit:
“I’m here next week. I will probably do [Quitana 11 and Ariell La Sierne] in the [$138,600 Marshall & Sterling 1.55m Grand Prix CSI3*]. And then I go home for a couple weeks and come back for [Desert Circuit V]. I try to just keep this horse ready for Hannah [Loly]. I really have to judge if I’m doing too much with [Quitana 11]. I need her ready for Hannah in May. So some days, maybe I’ll do the grand prix, maybe I won’t. It just depends on how I feel she is fitness-wise.”

On Ariell La Sirene:
“[Ariell La Sirene] is awesome. I’ve been riding her for three or four years now. She’s come a long way and we’ve built a really good trust together. She did her first 1.60m, the [$230,000 MLSJ Adequan Grand Prix CSI5*, presented by Essence Arts] in December. She really loves it here. It’s a really competitive horse. She’s also fast, but not as fast as Quitana. She’s really nice to ride. I love mares.”