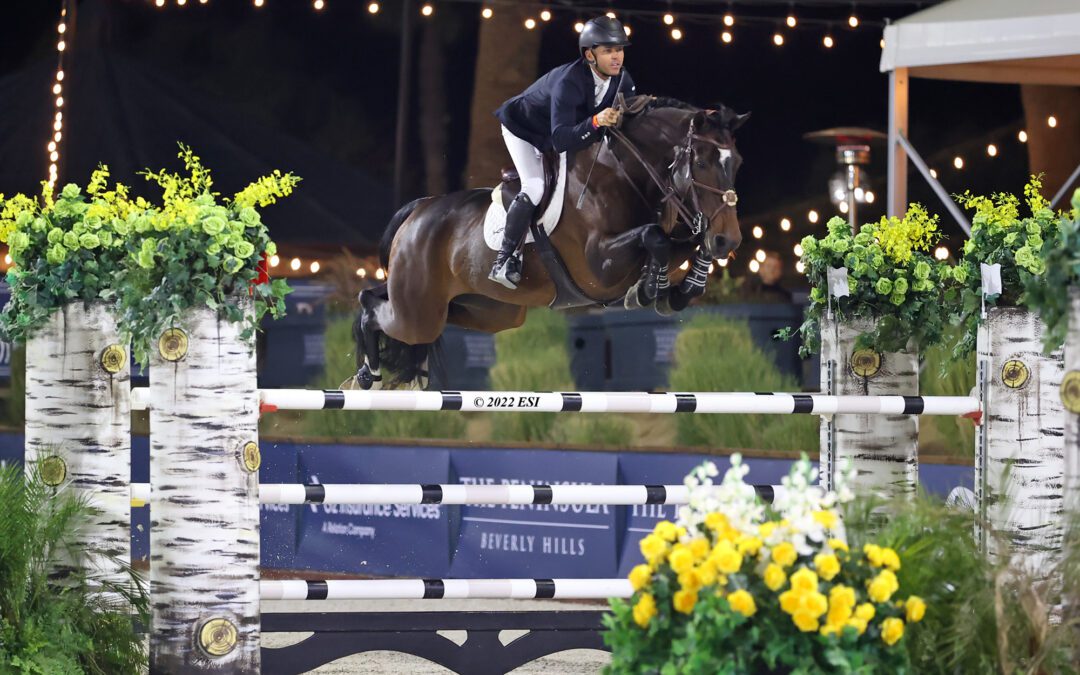 The former world-ranked number one has made his mark on Desert International Horse Park (DIHP).

Kent Farrington (USA) returned to Thermal for the first time in over 10 years and snagged a CSI5* win Friday evening of Desert Holiday II aboard Orafina in the $72,400 CWD CSI5* 1.50m. 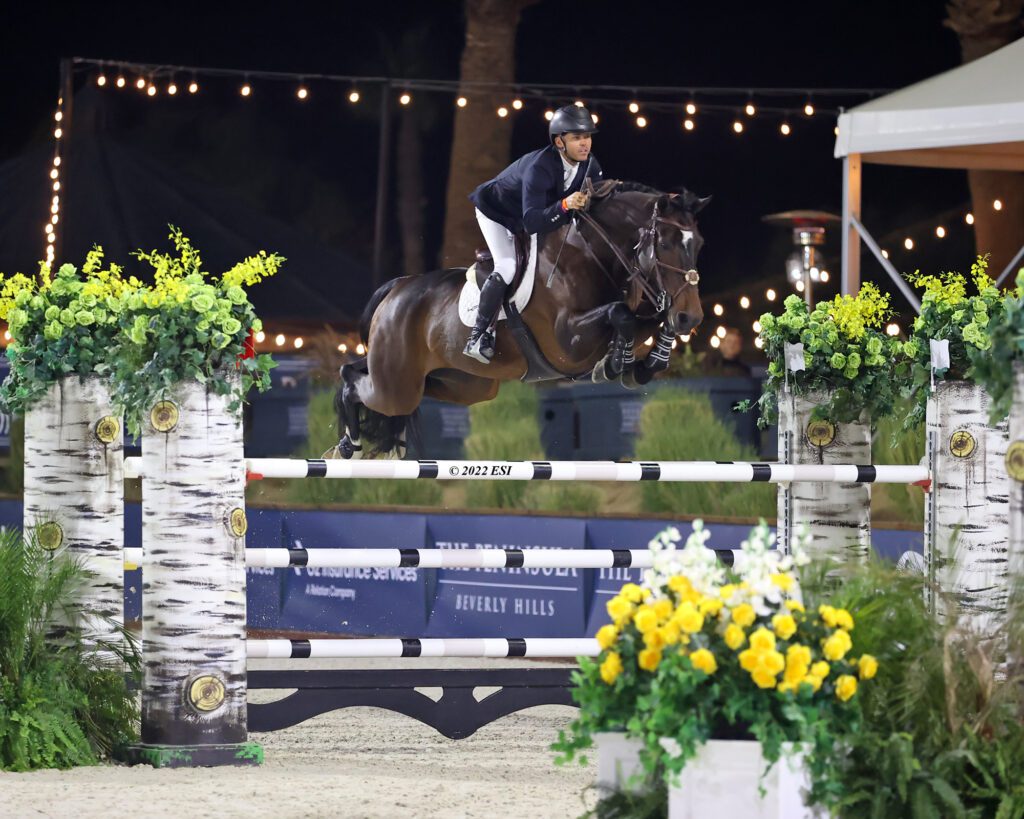 “Orafina is naturally a very fast horse,” he said of the 10-year-old Dutch Warmblood mare (For Fashion x Canturo). “She’s exceptionally careful so for her it’s really about riding her best round. You have to ride her on a high tempo and attacking stride because she’s so careful at the fences. Most jump-offs are just about doing her round and not worrying about what the rest of the class is going to do. I didn’t actually watch many others; I just let her do her thing and tried not to mess it up.”

Farrington and Orafina were one of eight pairs to jump clear over Alan Wade’s (IRL) first-round track and advance to the jump-off. From there, it was a game Farrington knew well, speeding to a time of 32.72 seconds, which could not be caught, though they tried. Simon McCarthy (IRL) took second with Rock Ridge Farms’ Gotcha, while Amy Millar (CAN) took third with Christiano, owned by Future Adventures. Farrington, 41, seems to be speaking the same language as his horses as they go around these massive, challenging tracks, but it’s partially because he is communicating vocally with them along with giving more traditional aids. “I have a few different sounds for commands I have with horses,” he remarked. “I think any way you can communicate with them so they understand what you want is going to be an advantage with your riding.”

This time last year, Farrington was in Geneva competing at the Rolex IJRC Top 10 Final, but December 2022 brought him to the other side of the world, where he’s finding himself right at home. “I miss that event; it’s a great event, but I’m happy to be here,” he remarked about being at DIHP. “It’s a tremendous venue. I haven’t been here in over 10 years and it’s unbelievable the change they’ve made. The team behind it is incredible; hats off to them for putting on a great event. I’d love to come back. I’m interested in seeing what they do and what they have planned for the future. It has great potential and is a great place for our sport.” Amy Millar (CAN) and Christiano. Photo by ESI Photography Kent Farrington (USA) and Orafina in their winning presentation. Photo by ESI Photography

Haness Brings His Equitation ‘A’ Game in $15,000 Pro Equitation Challenge

Friday evening, professional riders got the chance to show off their equitation skills in the $15,000 Valencia Saddlery Pro Equitation Challenge. In a field of well-decorated equitation stars, Nick Haness took the top spot aboard Venti, a Holsteiner gelding by Diarado, owned by Bernadette Mulliken.

“Venti is an amazing horse,” Haness said of the 7-year-old. “He stands true to his name because he’s almost 19 hands. He is such a great horse for us. I imported him as a 5-year-old two years ago and he spent his first year here with my boyfriend, Ryan [May], showing in the hunters, equitation and some jumpers. Now he does Amateur-Owners and medals as well as derbies with his owner Bernadette.” With a class full of talented exhibitors, Haness felt the pressure. “This was a really strong group of professionals. Some have won Maclay Finals, USET Finals, and Medal Finals. When I heard there were competitors such as Lillie Keenan in the class, I knew I had to bring my ‘A’ game and show those young guns I could still do it,” he reflected.

Haness owes his ability to stay sharp in the equitation to how often he competes in the handy hunter rounds. “The handy hunters are something we practice weekly competition and that resembles what an equitation course might be like with tighter turns and some pace and maybe some angles on the jumps,” he explained. “Tonight’s class was cool to slow it down, dial it back and work on the basics, while still keeping pace and being efficient, and putting some polish to it.”

Many top riders got the chance to relive fond memories of competing in the equitation in their junior careers, including Haness.

“I absolutely loved doing the equitation when I was a junior,” he recalled. “One of my favorite memories as a junior was qualifying for Maclay Finals and going back east. I was lucky enough to win Talent Search Finals as a junior. Equitation was always such a treat and so much fun. Obviously as a professional we don’t get to do that often so it was a really fun opportunity that DIHP hosted this to allow the professionals to compete and pretend they’re kids all over again.”

Equitation competition continues as junior athletes give it a go this weekend at 8:00 a.m. Saturday with the ASPCA Maclay Medal, followed by the Dover Saddlery/USEF Medal in the Grand Eq Arena.

The young horse is newer to Haness’ string, but they’ve meshed well and also took the win in the $20,000 DIHP Young Hunter Championship during the National Sunshine Series. Their scores of 92 and 95 put them in the winner’s circle convincingly on a total score of 187, beating out himself and Reese’s, owned by West Coast Equine Partners LLC. Third place went to Allison Talbot’s My Oh My and Nicole Bourgeois.

Derby action continued with the $10,000 HorseFlight USHJA National Hunter Derby – Junior/Amateur, and it was Noah Nelson leading wire to wire for the win aboard Catwoman, owned by Leslie Pinkerton Nelson. His handy round score of 96 reflected the risks he took and the precision executed. Combined with his first-round score of 92, he captured top honors on a total score of 188. Second place went to Julia Greenspan with Paperboy, owned by Brighton Farms, while Avery Glynn and Margaux Spitzer’s Vagadam PSH claimed third.