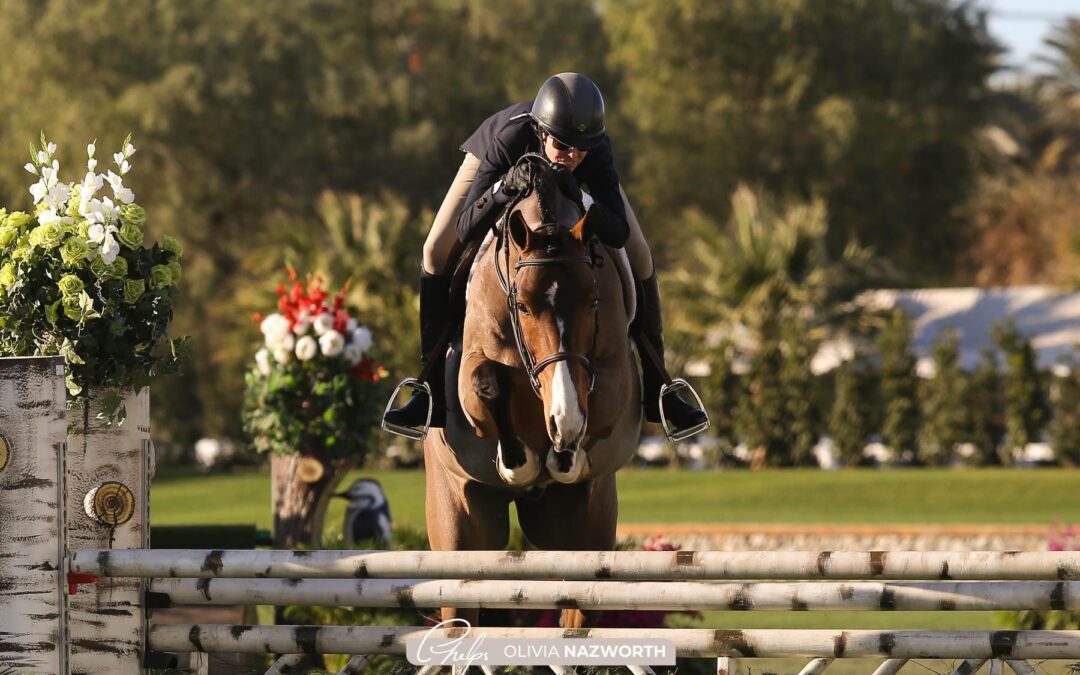 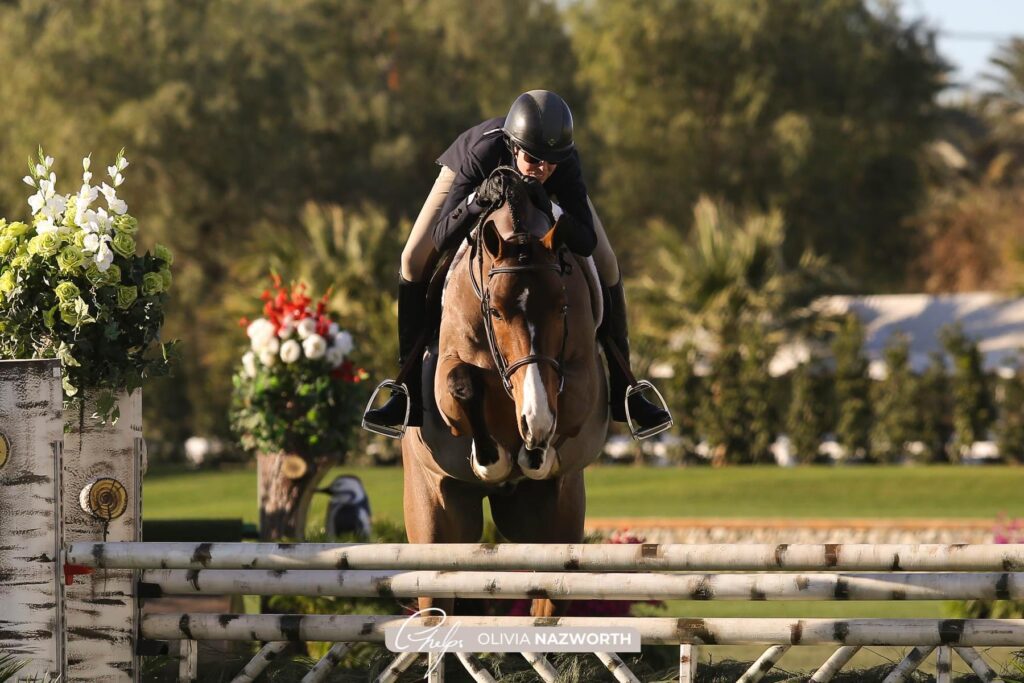 The first round tested the riders with a winding course and options to show off their horses’ scope and style on the large field with a total of four high options on the course. Pathfinders on the grass field, Taylor-Davidson on L’con Reyes set the standard as first on course with a score of 84 from both judges to total 176. After round one, Nick Haness and Jenkins, owned by Brianne Tsakopoulos, were on top with a score of 179. In a close second was Haness aboard his second mount, Dalmore, owned by Julia Nagler, on a score of 177.5. Taylor-Davidson held a top three position heading into round two, tying with Haness and his third mount, the Double Down Farm, LLC, entry Caldiano, to round out the top three after round one drew to a close. The top 12 pairs returned for the handy to further demonstrate their horses’ skills and abilities to maneuver an impressive course, with the cut-off score to return being 149. The handy course included a trot jump, a bank, and four high options for the riders to contest, plus several options after fence eight regarding which direction to turn, which way to jump a reversible fence nine, and which final oxer to choose coming home. Riders typically ride in reverse order of merit, however some pairs went out of order to accommodate riders with multiple horses to compete over the second round track. Haness took advantage of being able to jump the course twice and put in a bold effort on his third mount, Dalmore, taking all four high options and being rewarded accordingly with eight handy bonus points for a handy score of 191 and a total score of 368.5, taking the lead. Taylor-Davidson and L’con Reyes returned with a well-ridden round for a handy round score of 196 and a total score of 372, knocking Haness off his throne and putting him into second, where he would ultimately land. Rounding out the top three at the close of the class was Lisa Wall and Tangled Up In Blue, owned by 3P Equine Partners, LLC, on a total score of 358. Lisa Wall and Tangled Up In Blue

Earlier in the day, hunter competition got underway with the $5,000 TALUS USHJA National Hunter Derby – Open section, welcoming 35 entries into Hunter 1. After the first round, Haness and Reese’s, owned by West Coast Equine Partners, LLC, captured the lead with a score of 91, then solidified his win by scoring a 91.5 in the handy round on a total score of 182.5. Second place honors went to Julia Rossow aboard Crowd Pleaser, also owned by West Coast Equine Partners, LLC, with a total score of 178.5, and third place went to Haness and Jennifer Berman’s Stiletto with a total score of 178.25.  Rossow was also named Leading Lady Rider, sponsored by Rusty Brown Jewelry. Following the Open section, competition continued with 42 junior and amateur athletes contesting the $5,000 G2 Insurance USHJA National Hunter Derby – Junior/Amateur. Emma Post on her own Won Love was leading the first round with a score of 90, but Paige Walkenbach’s impressive score of a 94 in the handy round, with Walkenbach Equestrian LLC’s Classic, skyrocketed her to victory with a total score of 177. Post and Won Love came in second place with a 77 in the handy round and a total score of 167, and rounding out the top three with Noah Nelson and Annapolis, owned by Tulucay Farm LLC, with a total score of 161. Hunter competition at Desert Circuit IV will continue Saturday, February 11, featuring junior and amateur athletes vying for their respective championships throughout the weekend.

On her handy round strategy:
“We wanted to make it a little handy to jump one, so we stayed on the inside of the windmill on the way there. So we cantered to one, which was a little tricky because it’s a little bit in the shade, but I pressed him over it and he gave me his all. We came back to fence two and I stuck with doing the lower option there. The high option is just if I want to be really tidy, but I thought that would be a little bit trappy for him, so I wanted to give him a positive ride there. At fence three I knew I had to do the high option. I really had to dig in and get him to jump over it and he gave me a great jump there. After that I felt like he was on it and he just stepped up the two-stride, then trotted beautifully. We came down the slope up to the vertical. I had to create a little more bounce to the bigger oxer at eight. It was fun to canter through the grob and then back to the hay bale, and then to finish on the big oxer. He was fantastic.”

On the difficulty of the course’s challenges:
“The two that had rails at the high option at fence eight landed and turned right, and that’s kind of what I wanted to do because I thought it was the handiest turn. But seeing that rails fell, I knew that with the jump on the back side, I had a feeling that that could happen. I knew I’d have a rail there, so I just played it safe and just jumped out and went through the grob instead to the left because he’s better to jump off his right and land left than he is right to right. With the grob yesterday he was a little like, ‘What are you making me do?’ But today he was. He was like, ‘Okay, I guess this is what we’re doing today.’”

On going first in the order:
“I just did what I walked and didn’t have to second guess anything and just rode the track that I had to ride. For me, it’s less pressure going at the beginning because you’re not just sitting here waiting and overthinking. You just go in and do it. I prefer an early draw, actually. I know a lot of people don’t.”

On L’Con Reyes
“Theo is his name in the barn. I started riding him in 2018. This is his fourth derby win with me, and I actually don’t work at the barn where he is now, so I don’t get to ride him as much anymore. I used to ride him a lot. But they’ve kept him going fantastically and he showed up to the show this week and I go and jump in once in a while. I think we just know each other really well because we’ve had a lot of rides together. He’s funny; he makes you work for it, but he’ll give you his all, all the time. He really wants you to dig in and ride and get it done. That’s why he’s so good at the derbies because you can ride like that a bit, and he’s always trying his heart out for me. He knows he’s all that. He’s a bit sassy and he likes to play games with his mom when his mom rides him once in a while. But he’s sweet, sweet, sweet. Very sweet. His owner, Valerie, has owned him since he was four so nine or ten years now. He knows who she is and she loves him.”

On holding a derby on the grass field:
“I can’t believe how beautiful the course was today and how amazing the footing felt to me out here, and to be able to come out and do something on the grass at Thermal is pretty awesome. I want to let them all know that they did a super job and I’m super excited. There are more flowers here today than at my wedding, for sure.”