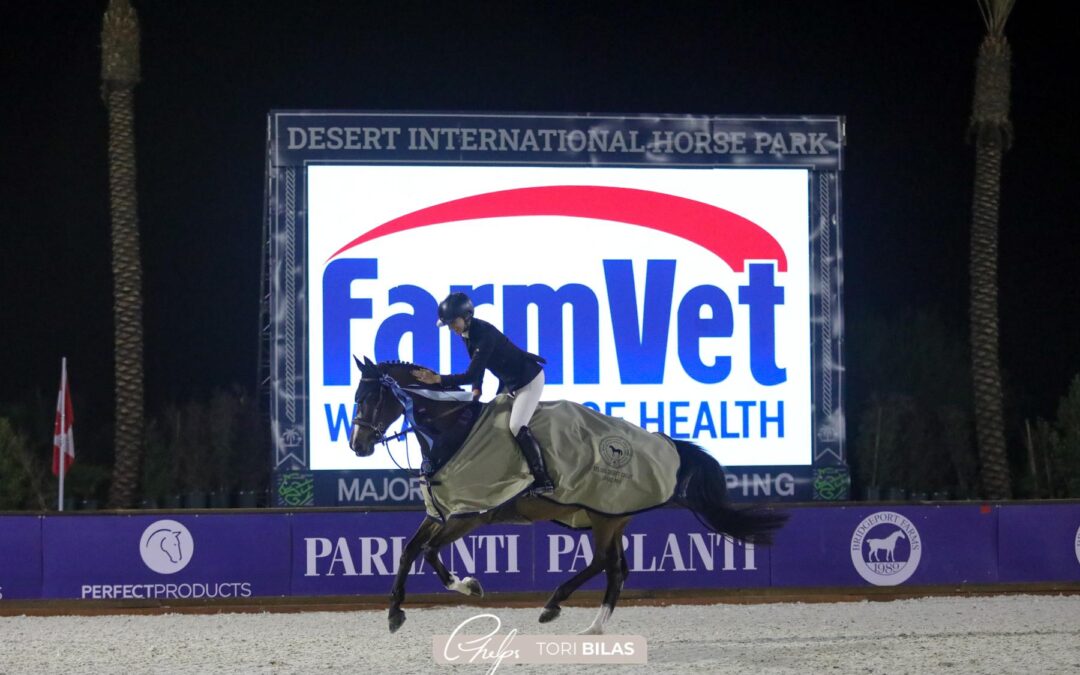 Thermal, Calif. – Feb. 5, 2022 – Show jumping action culminated Friday night in the Grand Prix Arena with the $25,000 FarmVet Grand Prix. With 28 entries coming forward to contest the track, Ireland’s Alan Wade set a course with demanding elements and various questions to challenge the athletes and their respective mounts. After an exciting first round in which only six pairs jumped the track clear, it was the United States’ Karrie Rufer who prevailed with the quickest clear jump-off to clinch the win aboard Stern Dei Folletti. The 13-obstacle first round track put forth numerous difficult tasks, offering both a triple and double combination with tricky turns throughout the arena. Venezuela’s Angel Karolyi and Delta VF emerged as the first duo to leave all of the rails in the cups, and just a few rounds later, Rufer would force a jump-off after piloting Stern Dei Folletti through the course fault-free. With rails falling in various spots on course for remaining competitors, there were two athletes that suffered only time faults, leaving them just out of contention for the jump-off. By the conclusion of the first round, Vanessa Mannix (CAN), Shawn Casady (USA), Mattias Ekeroth (SWE) and Susan Artes (USA) added their names to the jump-off roster. The shortened 8-effort jump-off course included the addition of three new jumps as the first three elements, with plenty of opportunity to cut corners in order to save valuable time. As the pathfinder, Karolyi was immediately at a disadvantage after knocking a rail at the second oxer. He managed to finish the round with just four faults, notching 42.367 seconds on the clock to set the pace for those to follow. Rufer and Stern Dei Folletti entered the arena with confidence, slicing and dicing their way around the Grand Prix Arena to take the shortest track possible. The duo crossed the timers on a double-clear effort in a speedy 39.900 seconds to move into the leading position. Both Mannix and Cassady would suffer the same four-fault fate as Karolyi, riding Kingston and Fugon, respectively, leaving them short of the winning spot. Ekeroth piloted Haydee M through a clean course, playing it safer with the clock to move into the second place position on a time of 43.061 seconds. Artes and California Sunshine were the final pair to try their hand at unseating Rufer. Though they managed a clear effort, they could not match Rufer’s impressive time, finishing in 44.398 seconds to ultimately claim third place honors. In the end, Rufer and Stern Dei Folletti would emerge victorious, while Ekeroth and Haydee M secured second place. Just prior, 24 international horse-and-rider combinations battled it out for the top title in the $37,000 Marshall & Sterling 1.45m Classic CSI3*. Wade set forth a 12-effort first round track to whittle down the field of competitors who would ultimately advance to the eight-element jump off course. As the first to take on the track, Canada’s Vanessa Mannix navigated the pathfinding clear round riding Catinka 25, with Alexis Sokolov (USA) and Fasole Du Seigneur leaving all of the fences intact just one round later to guarantee the crowd an exciting jump off. Ten additional pairs would add their names to the jump off list by the end. With the lead exchanging hands multiple times throughout the jump-off, it was ultimately the United States’ Keri Potter who claimed the first place honors riding Bisou, owned by Tres Palomas, to a double-clear effort in a swift 34.03 seconds. Brazil’s Cassio Rivetti claimed second place at the conclusion of the class with Vulcana, owned by  Mavis Spencer, with Spencer (USA) riding Georgy Maskrey-Segesman’s Con Calle to round out the top three. Earlier in the day, athletes brought their young show jumping mounts to the Grand Prix Arena for the  $10,000 Interactive Mortgage 1.35m 10 & Under Futurity Series. Out of a field of 26 riders aboard rising talents, it was Kyle King (USA) who reigned supreme, saving the best for last aboard Kerri Volek’s Ittolo. King piloted the 9-year-old KWPN gelding through the 12-obstacle first round track with ease, clearing the fences and immediately advancing to the eight-effort jump off track, which included the same first four elements, sweeping turns through the expansive arena and two new fences introduced on course. As the last duo in the arena with the final shot at the win, they shaved one second off the leading time to claim first place in 32.771 seconds. France’s Eric Navet ultimately nabbed second place honors riding Signe Ostby’s Coronado Blue NF to a jump-off time of 33.747 seconds. King would round out the top three aboard his other mount in the class Gipsy de L’Epinette, owned by Spruce Meadows LTD, with a jump-off time of 34.901 seconds. 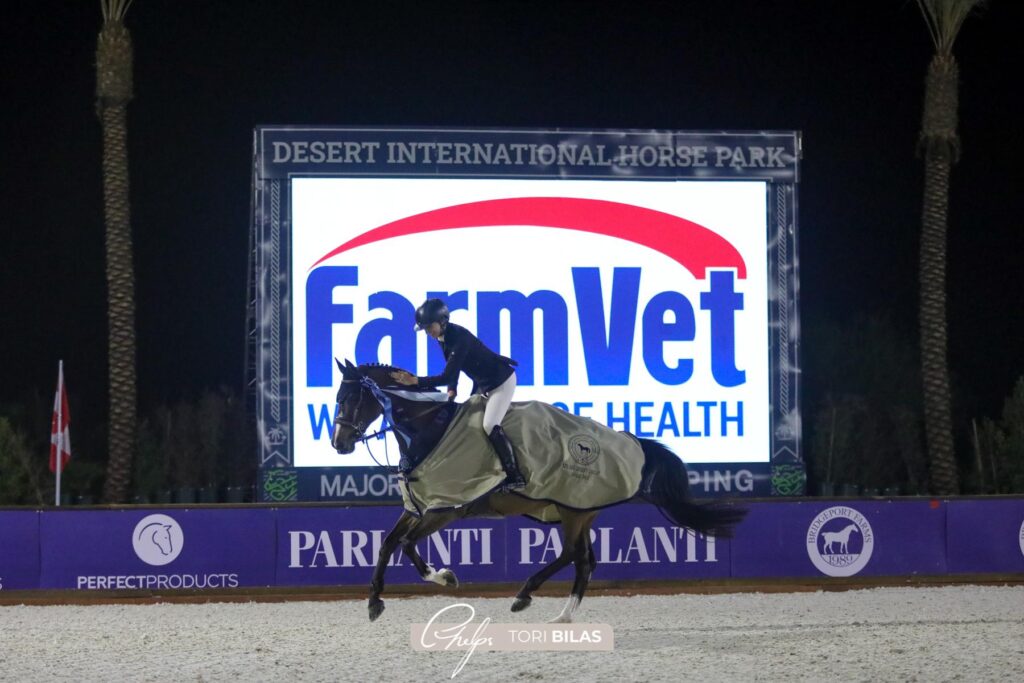 On the jump off:
“Before I went into the ring, I actually told my coach, Conor Swail, that I was just wanting a nice, solid, double-clear round. [Stern Dei Folletti] is just naturally quite quick and competitive. We just hit the first jump and he felt like he wanted to go. I kind of pressed on the gas a little bit and I caught the second jump really big at a very weird angle, which set us up really nice for the ten strides in the middle. He was very rideable in the rollback. I was really proud of him. We haven’t had a lot of experience together in grand prix classes, so I didn’t really know where the controls were or weren’t. We did a leave out across the middle, which he jumped great. And then we came back to the double, he was quite quick there. And the eight strides to the last jump was just easy for him. He’s got such an adjustable stride. If you wanted to add two or leave out two, he’s totally fine with doing either. He was quite quick tonight.”

On Stern Dei Folletti:
“His name is Stan. We call him ‘Stan the Man’. He’s very small; he’s 15.3h. He’s just a pony but he does not know it. He’s got the biggest heart and such a great competitive attitude. He walks in the ring and he thinks he’s the man. He knows it. It’s so fun to ride a horse like that. I bought him as a 6-year-old. He’s 11 years old now. He’s just really coming into his own and we’ve finally forged this really great partnership where we trust each other. He’s not totally orthodox. He has his own style, which is totally fine and it took me a minute to finally adjust to that. But now that I have, he will turn himself inside out to jump clear and to be fast, competitive, and have a game face on at all times. It’s cool to know a horse from such a young age. And now, seeing him going into the Grand Prix Arena and being confident and successful is really cool for me that we’re able to produce a horse like that, which is awesome.”

On her goals with Stern Dei Folletti over the circuit:
“I want to do a couple of CSI3* classes in the second half. I think he’d be very well suited for that. The jumps tonight for him felt really easy. So for me, I don’t think we’ve really tapped into all of his potential yet. I like taking things a little bit slow till we’re on really solid ground. And I feel we’re on solid ground now, so it’s time to challenge ourselves a little more.”

On DIHP:
“I love this horse show. I spent four years in Wellington, and this is my first winter back here. And, obviously, being successful early on is really nice, but it’s just been so lovely being here. The horse show management has done such a fantastic job on all the improvements and making the competitors and spectators feel special. The night atmosphere that you get is hard to find anywhere else, especially with the quality of the footing and lights. It’s a great circuit and I’m planning to come back for all the more years to come.”