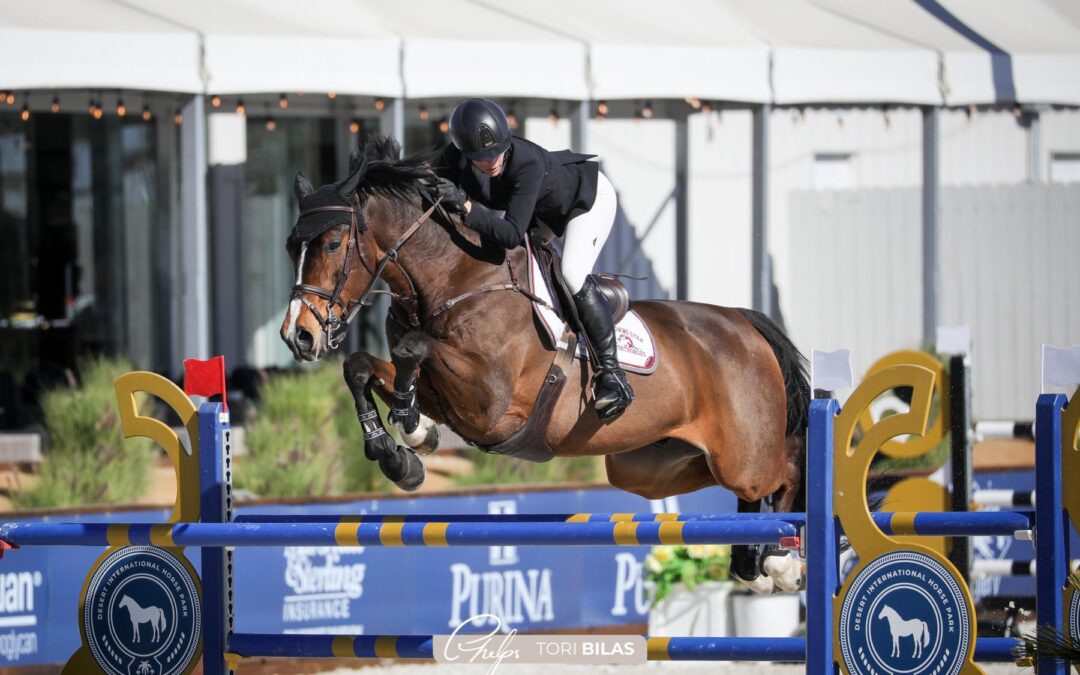 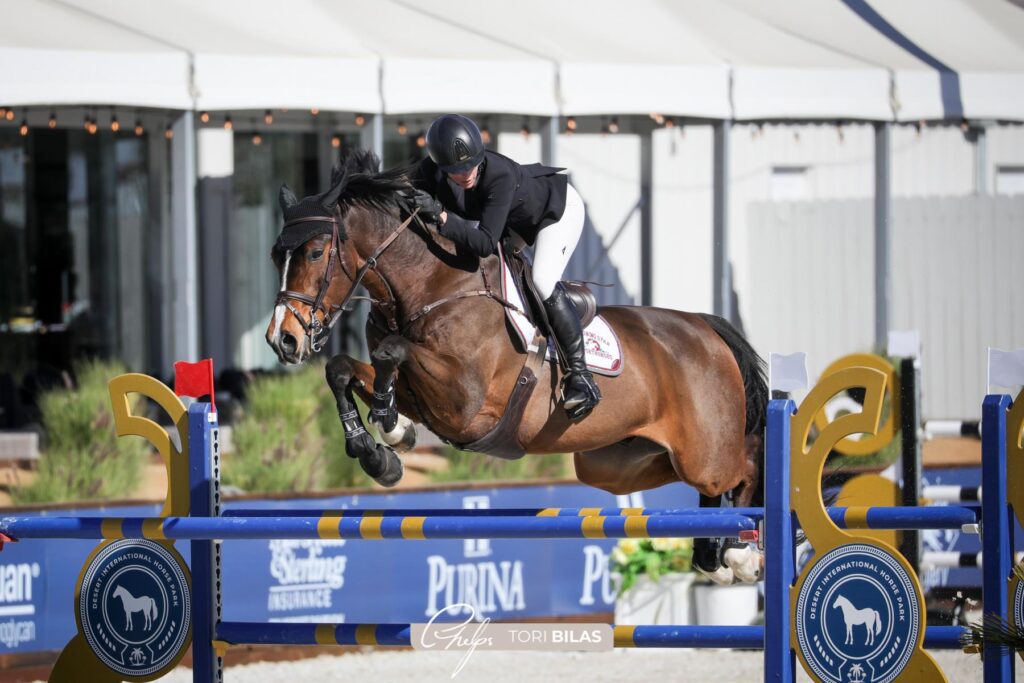 The course for the class was divided into two phases, the first of which featured eight obstacles that athletes tried to navigate clear and within the time allowed 50 seconds. Riders who achieved a clear first phase immediately advanced into the speed phase, which began at fence nine and required athletes to kick into the next gear to capture the quickest clear-round time in order to secure the win.

The first double-clear effort was seen by Keri Potter (USA) aboard Bisou, setting the pace for those to follow with a time of 31.47 seconds. The lead immediately exchanged hands as the United States’ Elisa Broz piloted Tinkerbell to a double-clear finish in 28.25 seconds. Nine rounds later, Ireland’s Conor Swail and his notoriously quick mount Errol slipped into the leading position, shaving nearly one second off of Broz’s time to cross the timers in 27.77. Immediately following, Rufer put her best foot forward with Mr. Europe, just narrowly taking over the top spot in a time of 27.23 seconds. Though the remaining 14 horse-and-athlete combinations would try, none could match Rufer’s impressive finish to ultimately lend her the win with the 13-year-old KWPN gelding. Swail and Errol finished out the class in second place, while Broz and Tinkerbell rounded out the top three. The $2,500 Whittier Trust Welcome Speed concluded Thursday’s competition in the Grand Prix Arena, welcoming a field of 26 athletes to contest the 11-obstacle track designed by Wade. Kyle King (USA) and Kerri Volek’s Ittolo reigned supreme after riding to a swift time of 59.184 seconds. Second place was awarded to Hanna Mauritzson (SWI) aboard Unique Star, owned by Ritz Fuente LLC, for their time of 61.356 seconds. Joie Gatlin rounded out the top three riding Louisville 5 to a time of 62.334 seconds. On the course:
“I thought today was going to be a bit more of a schooling round. The plan wasn’t necessarily to go fast, but [Mr. Europe] started out really nice and very balanced. I’m taking a page from Conor Swail’s book and not using spurs, and I’ve never done that in my life. But [Mr. Europe] started jumping really well and a bit sharper. He just felt like he was happier going quicker. As I turned to the double, I thought his balance was great. The line on the end set us up really nice to rollback to the double because it allowed me to be a little bit tighter and still have a nice distance in.

“Conor had mentioned if you really look in and see it, there’s a nine-stride to the beginning of the speed phase. He said, ‘If you see that, you can do a leave-out and just do seven strides instead of eight down the side.’ We just kept going and turning to the last, which walked in seven strides. A lot of people had to go wide to fit the seven. I stayed a little bit wide to the jump prior to that last line and caught quite a big one in. His stride’s so big, we ended up leaving it out in six strides. Luckily that horse’s ground speed is quite good and he doesn’t spend too much time over the jumps. I saw Conor go right before me and he’s on a tiny little speed horse. Mine’s a bit bigger and not as speedy, but luckily leaving out the strides kind of helped us and put us ahead.”

On Mr. Europe:
“We call him Eddie in the barn. He’s by Mr. Blue. I bought him as a 9-year-old from Marc Houtzager in the Netherlands a few years ago. He’s just been such a wonderful horse. We like to call him the ‘emotional’ one in the barn. He just wants to be pet and be told everything is going to be okay. He’s been fantastic for me though because I jumped my first CSI5* grand prix in Wellington on him. I jumped at Spruce Meadows. I’ve been able to jump so many big tracks on him. He’s just so confident building. He’s so sweet to me and he would never put a foot wrong if he could try. I wouldn’t say he’s the most careful horse, but as one of my first bigger grand prix horses, I thought it was more important that the horse was just always going to go and take me. Classes like today where the jumps aren’t as big, he can just go out and have a fun time. He loves his job, so for me it’s so nice when we both have a good day where it just flows up, everything’s coming up nicely, and he ends up winning.

“All of my horses, I kind of joke with them, ‘Why buy ugly when you can buy beautiful?’ I’ve just been lucky that I’ve gotten really beautiful horses. But he is definitely one of the stunners. He’s just this little model. He always has his ears perked and his eyes are wide open. Usually because he’s emotional and he’s like ‘Oh God, what’s coming up?’ He’s a good looking dude. He’s a sweetheart and he’ll sit there and put his head on your shoulder and you just pet him. The first time I actually tried him in Europe, I went up to him and just started petting him and he started licking my face. And I was like ‘Okay, you’re mine. I don’t even care what you do, just come home.’ He’s been a part of the family and he’s been such a great addition to all the other horses because he just fits in so well.

On trying Mr. Europe:
“The first time I tried him in Europe, I got my agent and I said ‘I really want a horse to potentially jump a CSI5*. My budget is not insane, so let’s see what we can find.’ And he said, ‘Okay, I’ve got two horses for you to try,’ and Mr. Europe was the first one I sat on. The feeling I got from him was so incredible, and I’d seen videos of him and I was kind of like ‘Hm, I’m not sure if it’s really really my horse or my ride. He’s a little bit bigger.’ But getting on him, it was like the way that he jumped with me was so different from what I’d seen in videos and I just thought that, on top of licking my face the first time I’d met him, I was sold.”

On Karrie’s type of horse:
“It ranges. I have such a big range. The horse I went on earlier today, [Stern De Folletti], was tiny and so fiery and all this crazy stuff. I have bigger horses that are twice as wide as some of the other ones. I think the one consistent thing about my type is their character. They come out every day so happy to do the job. If I don’t jump them for three or four weeks on vacation, when they come back and start jumping again, they are so excited and having so much fun. As a rider, that feels so great and I think that’s the consistent type for me. People always joke that I only buy geldings. My whole barn is geldings, and I have eight geldings. For some reason, I’ve just learned over the years that mares and I don’t necessarily meld. I have such an alpha personality and I always joke that my horses are the most ‘mare-ish’ geldings you’ll ever meet. They do have this spice and spunk to them. They have their own opinions but at the same time they’re like, ‘Yes ma’am!’ It’s a little bit different from what you’d get from a mare. I think my type is just a good heart, a good character, good personality and just happy to do the job. It makes you happy when you know they’re walking in and excited to go and help you out and do the job with you.”