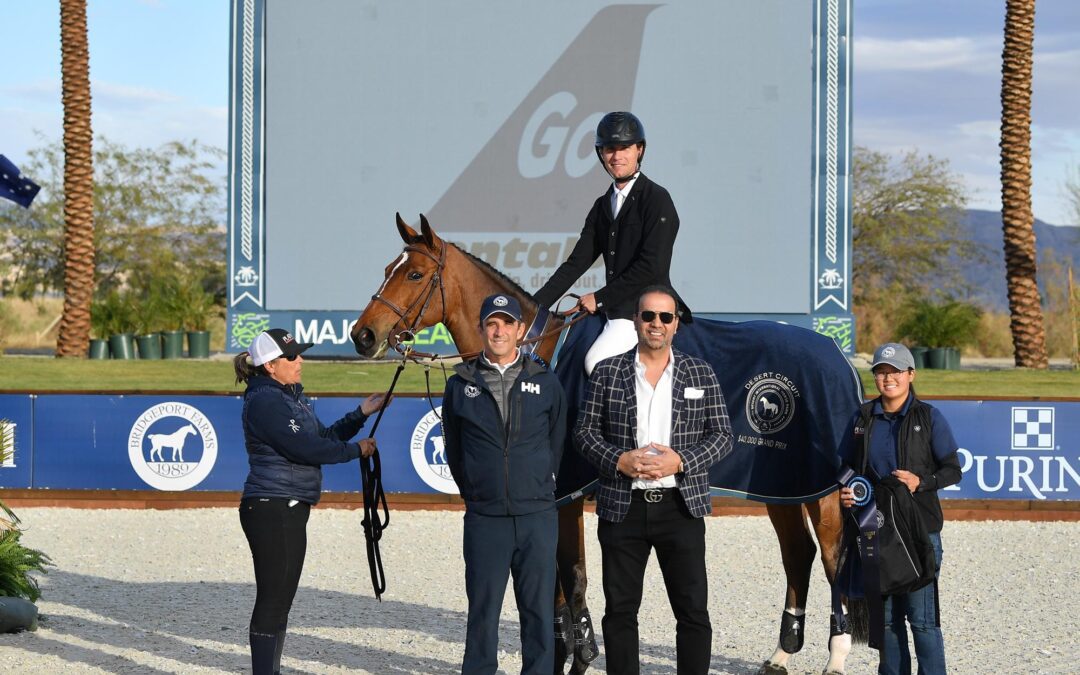 Thermal, Calif. – Jan. 22, 2022 – Show jumping athletes took to the Grand Prix Arena on Saturday afternoon for the $40,000 Go Rentals Grand Prix to compete for top honors and the lion’s share of the prize money. Twenty-nine horse-and-rider combinations took to the first course, designed by Ken Krome, in an attempt to navigate it clear and within the time allowed. With a total of six clear first rounds, the athletes moved forward into the shortened course, where speed became the name of the game. At the end of the class, it was Karl Cook and Signe Otsby’s Kalinka Van’t Zorgvliet who emerged victorious and took the win. The $1,000 EquiFit U25 Classic was held as an overlay with the feature class, and taking the win was Mitch Endicott and the Bridgeport Farms LLC entry Chaccrobat. First to jump the track clear and within the time allowed was Bruno Diniz Das Neves and Adele XIII. Returning for the jump-off, Diniz attempted to set the time to beat and put pressure on the remaining five entries, but had a rail down that would eventually place him fourth. Kaitlin Campbell and Mitch Endicott each accumulated faults as well, leaving just three to go and no double-clear efforts to that point. Cassio Rivetti, fresh off major Grand Prix wins at both National Sunshine Series and Desert Holiday in 2021, took to the short course with Cristal De Menardiere, a 10-year-old gelding owned by Delaney Batter, and quickly jumped to the top of the leaderboard posting the first double-clear round in a time of 41.288 seconds. Lisa Carlsen and Livestream 2, a 12-year-old Oldenburg gelding, picked up the pace and ultimately beat Rivetti’s time, but with one rail down to place third overall. 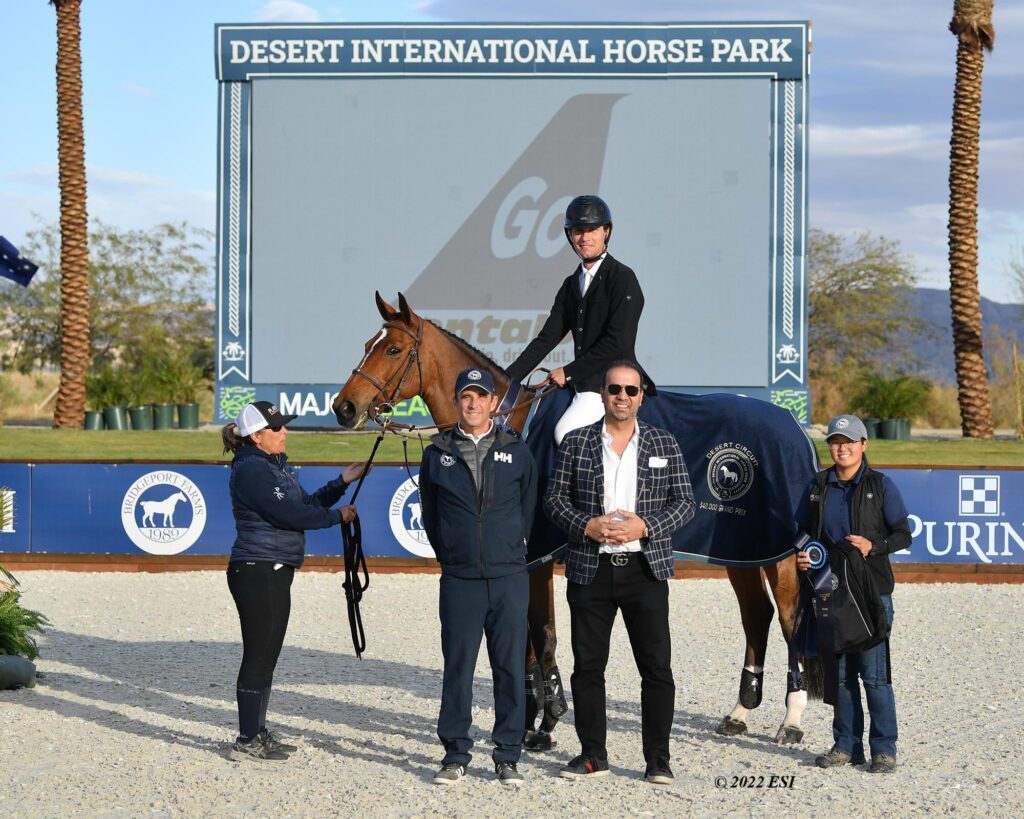 Karl Cook, who had captured the final Grand Prix win of Desert Holiday with the same mount, an 11-year-old Belgian Warmblood mare, was the final contender for the short course, and the pair galloped from fence one to two in fewer strides than most of the other entries before wrapping tightly to the double combination and effortlessly flying across the Grand Prix Arena, keeping all fences intact. He crossed the timers in 39.981 seconds, claiming the lead and winning the class. On the jump-off:
“Fence one, the timers were cocked at a bit of an angle, so you couldn’t come to the approach that you wanted you kind of had to put it into a turn. There was an eight from one to two, but you had to really get fence one right. Everyone was kind of getting nine because that eight is really inside track. But she just followed so easily and landed on the inside track to fence two and we got the eight perfectly. I knew at that point that I was up on time, and so I saw one less coming into the double, but I said ‘You know what, it’s along the fence. I know I’m up on time – because I watched Cassio go – let’s just add, do something a bit more conversative.’ Then she landed from the double and accelerated and so I was like, ‘Okay, we’re still doing okay.’ So I saw one less to the black oxer – fence 4/15 – but, again, I added because I felt confident that my time was still good. We landed and she cut such a hard edge to the oxer – fence five – and we got it out of stride and just awesome. We landed and started turning. I had one less in my eye to the second to last, but she turned so hard on landing – we actually lost some traction. At that point it was just safer to add to the second to last. And then seven strides, even though I was under the second to last, the seven to the last was not continuing.”

On Kalinka Van’t Zorgvliet and their partnership:
“I’ve had her for about three years now. She’s super hot, super fiery. We would say like a ‘gamer’. She gets the game and she loves doing it, sometimes too much where she leaps in the air and it’s a bit wild. She understands the point of the game and it makes it so much fun to ride because she gets it. It’s a partner that’s just here with you and sometimes dragging you saying, ‘Here, let’s do this not that!’ It’s so much fun to ride.”

On Kalinka Van’t Zorgvliet’s character:
“Well she’s very small and in the barn she’s very sweet, easy, and calm. Everything in the barn is super easy. When you go to ride her she’s very hot. Some days, like earlier this week, I flatted her for like an hour straight and she was still pulling and bucking. I took her back to the barn and then Jenny got on her later and rode her for another 30-45 minutes. She just has so much energy that you just have to stay on top of it. She needs that fitness and the strength to do this and you just have to, as a rider, stay on top of it so it doesn’t get out of hand.”

On Karl’s goals for the circuit on Kalinka Van’t Zorgvliet:
“I’m here for this week and next week and then I go to Florida. Next week she’ll do the 3*, so I’m just hoping to continue what was going well here this week to next week. There were a couple issues, particularly in the first round, where my riding was not as accurate as it needed to be. So I need to fix those issues so that I can give her an easier job so she doesn’t have to save me. I’m doing my part better.”