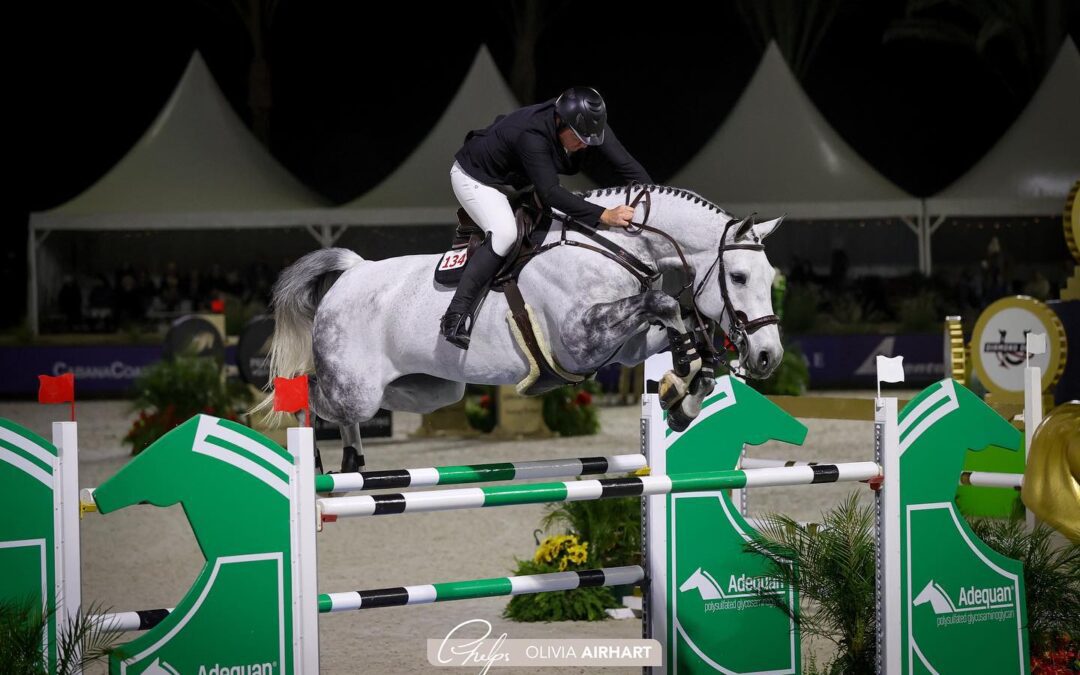 Thermal, Calif. – Dec. 11, 2021 – CSI5* show jumping came to a thrilling culmination on Saturday night with the $230,000 Adequan® Major League Show Jumping Grand Prix CSI5*, presented by Essence Art Gallery. Riders set out under the lights of the Grand Prix Arena at Desert International Horse Park to not only claim the top spot in the class and take the lion’s share of the prize money, but also to vie for the coveted leading rider title for the inaugural year of Major League Show Jumping. Winning the class on Saturday evening was Ireland’s Jordan Coyle with Ariso, and topping the season-long standings after top performances in various locations across North America was fellow Irishman Paul O’Shea. 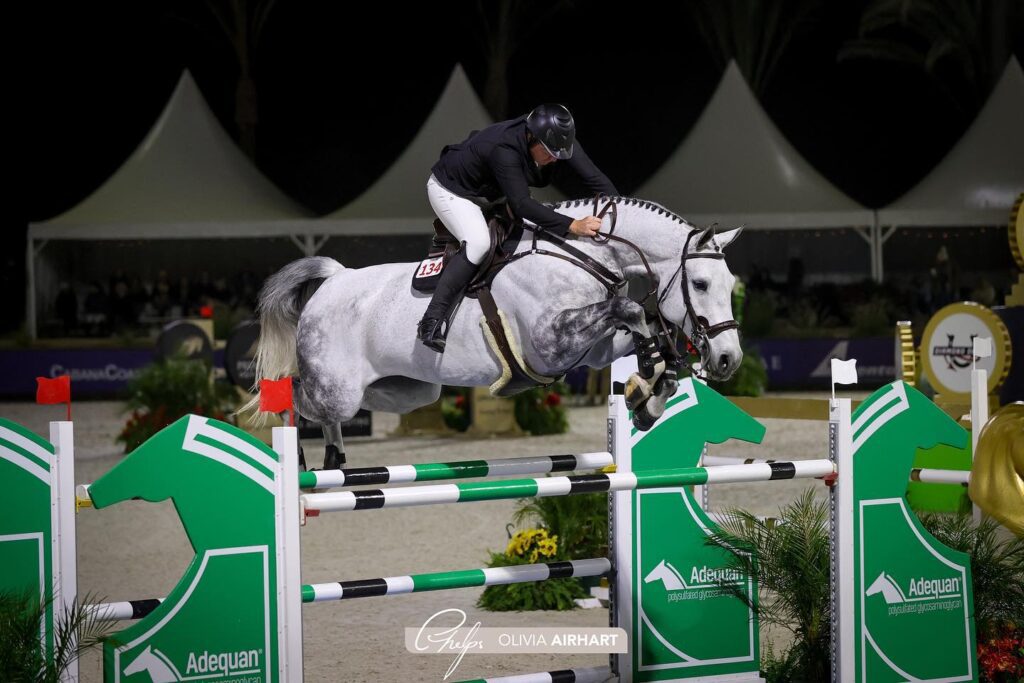 With a field of 37 international athletes coming forward to test the track, Ireland’s Alan Wade, with the help of Peter Grant (CAN), Nick Granat (USA), Joe Rycroft (USA), and Jared Erho (USA), set a course to challenge the best of the best equestrian athletes from around the world, featuring a course of 14 numbered obstacles that included long bending lines, a vertical-oxer double combination, a triple bar oxer, a vertical-vertical-oxer triple combination, a solid stone wall out of a short turn.

It took 17 entries to get to the first of an eventual nine clear rounds that would complete the final jump-off. Canadian Sam Walker and Hermelion VD Hooghoeve crossed the timers within the time allowed for the first time while keeping all rails intact. Coming back for the jump-off first, Walker and his mount had a miscommunication at fence two and retired from the jump-off round. American Karl Cook came in visibly hungry to win, but lowered the top rails of two fences on the short course along the way. Next to challenge the track was Canada’s Amy Millar. After a strong start, she unfortunately took down the vertical at fence three, after a tight rollback, which overtook the lead after the first three had gone.

Egypt’s Nayel Nassar, on a roll in CSI2* competition during Desert Holiday, came into the ring on Igor Van De Wittemoere with a vengeance after his third place finish in the $72,900 Welcome CSI5*. He expertly maneuvered around the course in 34.77 seconds, the fastest at this point, but lowered the vertical coming out of the remaining combination for a score of 4 faults. Ireland captured the lead as Jordan Coyle and Ariso managed the track fault-free in an ultimately unbeatable time of 34.49 seconds, with just four entries left to challenge him.

Margie Engle (USA) and Royce came in quick but fell victim to the double combination yet again for a score of 4 faults and sliding into third place. Kristen VanderVeen let Bull Run’s Risen expand his stride to its limit to cover the ground and chase the win, but dropped two rails along the way with only two riders for the USA left to contend. The highest ranked rider in the field at number 12 in the world, McLain Ward put in a solid clear round in 41.02 seconds with Kasper Van Het Hellehof and secured the second spot with only his student and 2018 World Equestrian Games teammate Adrienne Sternlicht to give the short course a go. Sternlicht piloted Bennys Legacy around the course as fast as she could, subtracting strides and wrapping around the tight bends, but dropped the final rail to finish on a score of 4 faults and finishing third overall. To kick off the day in the Grand Prix Arena, National show jumping athletes competed in the $25,000 FarmVet Grand Prix, which was won by Conor Swail and Fiona Dowley’s Errol. Second place went to Karl Cook and Signe Otsby’s Fecybelle, and Cassio Rivetti and Delaney Batter’s Cristal De Menardiere rounded out the top three. Augusta Iwasaki was named winner of the $1,000 EquiFit U25 Grand Prix with Ali Nilforushan’s Freedom. In the next two classes of the day, FEI CSI5* and CSI2* athletes took on Winning Round format classes in the FEI $72,900 1.45m FarmVet Winning Round CSI5* and FEI $36,600 1.45m Cabana Coast Winning Round CSI2*, respectively, for a chance at the top prize money and additional ranking points. Topping the FEI $72,900 1.45m FarmVet Winning Round CSI5* was Mark Bluman (COL) and Cheilane De Blondel, owned by Gerardo Pasquel Mendez. Rowan Willis (AUS) and his own Wellington Grey Goose followed behind in second, while Conor Swail (IRL) and the Team Philippaerts entry Theo 160 were in third. Taking the win in the FEI $36,600 1.45m Cabana Coast Winning Round CSI2* was Kyle King (USA) and the Spruce Meadows Ltd. entry Coffee To Go. Karrie Rufer (USA) and Mr. Europe, owned by Morning Star Sporthorses, LLC, took second place, and rounding out the top three was Conor Swail and Asta Torokvei’s Gamble. Conor Swail stepped back into the winners circle in the $10,000 Interactive Mortgage 10 & Under Futurity Series on Saturday afternoon, taking the top prize in the prestigious class with the Morning Star Sporthorses, LLC, entry Like About You. The pair sped to a double-clear effort in a time of 34.576, over three seconds faster than the second place pair, Matt Archer and Zibaloubet Z, owned by Rhys Farms, LLC. Third place was awarded to Travis Root and Iowa B, owned by Lindsay Wendt. Competition at Desert Holiday comes to a close on Sunday with the $3,000 Alu Jumps 1.35m Open Classic and the FEI HorseFlight $72,900 Grand Prix CSI2*. Hunter/jumper action resumes in 2022 for eight weeks of competition, including five weeks of FEI competition, during Desert Circuit on January 19.

On winning his first CSI 5*:
“I can’t believe it. I actually never thought it would happen. I’ve been jumping this level now for a few years and I’ve never won a 5* grand prix. It’s been bothering me a lot because I’ve been close quite a few times. The one that haunts me the most is the first week of Spruce Meadows in the $500,000 CSI5*. There were five clear rounds, I think: me, Conor Swail, Eric Lamaze, Beezie Madden and Steve Guerdat. I had the fastest time with one down and finished fourth. That one haunts me big time. It would’ve been a massive achievement for that horse, Eristol. That was the closest.”

On Ariso:
“He was pretty good, and very good today. He was unlucky here on Thursday, but he jumped brilliantly here tonight. He’s very strong but he gives you a great sensation over the jump. Sometimes he can jump really high and it doesn’t always work out so well because sometimes he jumps too high and then you have to put on more pressure and then he can get strong. Today he was just nice and easy.”

On his jump-off strategy:
“The strategy for the jump-off is that I really didn’t have one! I don’t think you can have one; you kind of have to ride them off more off a feel. Sometimes you should add a stride, and sometimes you should leave out a stride. I guess today I didn’t really do numbers; he just jumped well. I didn’t feel like I was adding anywhere. I should have done five strides to the last jump but I chickened out. That made it harder for him. If he had knocked it in five strides then everyone would have said, ‘what were you doing five strides for?’ even though it would’ve been easier for him. I just can’t believe it. I actually can’t believe it. Never in my wildest dreams did I think I’d win this.”