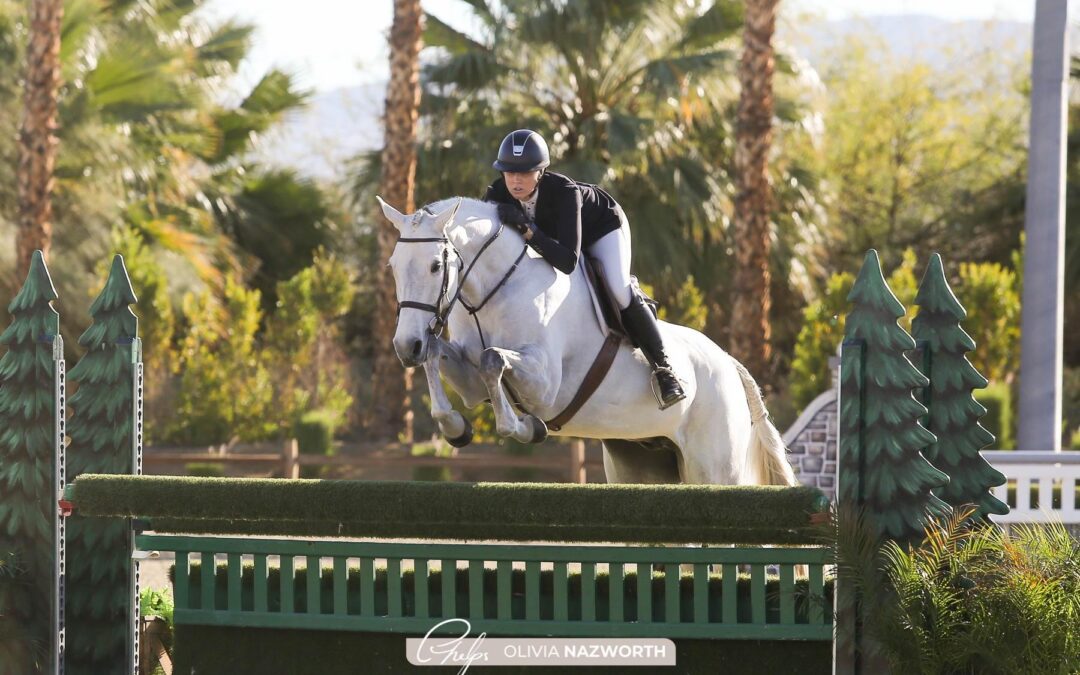 Thermal, Calif. – Feb. 10, 2022 – Hunter athletes took to Hunter 1 Thursday of Desert Circuit IV to vie for championship honors during the first of two WCHR Member Events to be held during the season at Desert International Horse Park (DIHP). Championship honors were awarded in various professional divisions, including the Oz Inc. High Performance Hunters, which were first to take on the courses for the day, set by Meghan Rawlins (CAN). After a successful two days of showing, it was Jamie Sailor and Get Rowdy, owned by Teton Farms, LLC, who took home the championship for the Oz Inc. High Performance Hunters. Matthew Sereni was awarded reserve championship honors with Hodine, owned by Trillium Farms, LLC. 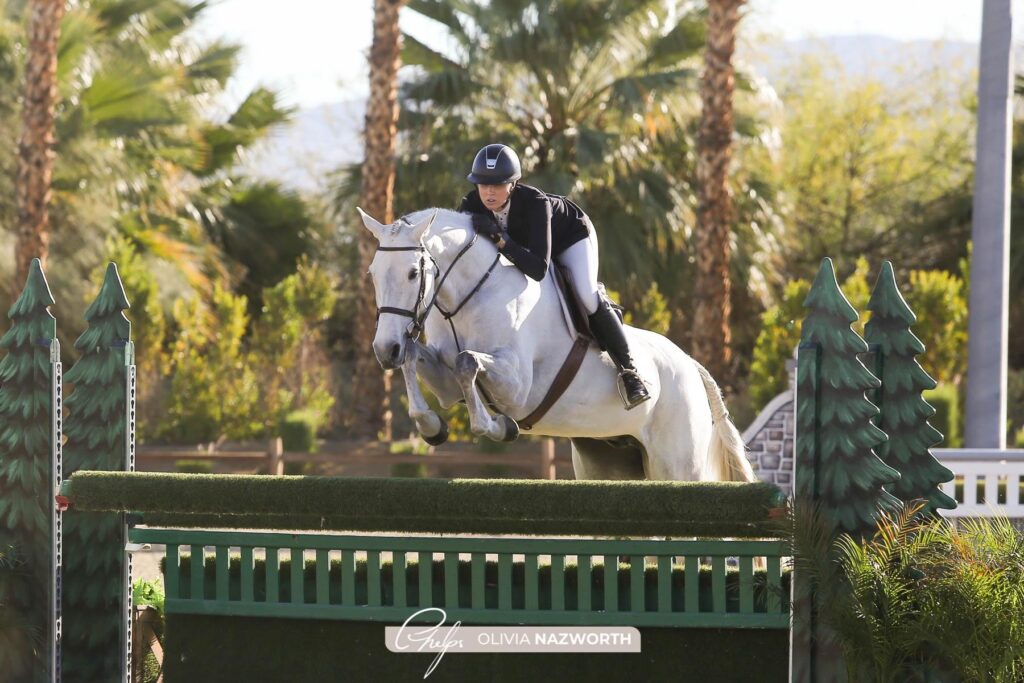 Jamie Sailor and Get Rowdy

During Wednesday’s portion of the division, the duo earned a first place in the handy round as the gelding showcased his skills around the challenging track, closing out the day with a seventh place under saddle and an eighth place over fences. Returning to wrap up the division Thursday, Sailor piloted Get Rowdy to another win over fences, as well as a seventh place, ultimately securing the championship.

Get Rowdy, a 12-year-old Dutch Warmblood gelding, is no stranger to the winner’s circle. In both 2019 and 2020, he earned the U.S. Equestrian Federation High Performance Hunter Horse of the Year title, in addition to claiming numerous championships throughout Southern California and topping international derby competition. Sailor has only been campaigning the gelding for the last year, but spoke highly of his talent and future success in the hunter ring.

Sereni piloted Hodine, a 10-year-old KWPN mare, to a first place finish over fences Wednesday to put the pair in contention for the Oz Inc. High Performance Hunter championship. Thursday, Sereni and Hodine received third and second place over fences, earning enough points across the two days of competition to walk away with the reserve champion honors. On Get Rowdy:
“Rowdy is a pretty phenomenal horse. He was the [U.S. Equestrian Federation High Performance Hunter Horse of the Year in 2019 and 2020 with Karli Postel. I came in to ride him at the end of his 2020 year and I was third place in a very big derby. Last year was a little bit slowed down because of COVID. So he hasn’t done the high performance in a little bit. He did a few classes last year, but not super competitively. I’ve basically been riding him for just over one year now. This was his first week of the [Desert Circuit] doing the high performance. He definitely hasn’t forgotten! I plan to do the [$50,000 Butet USHJA International Hunter Derby] tomorrow with him, which was why we were doing the High Performance Hunter to get his sights up a little bit, hopefully take all the high options and win the derby tomorrow. That’s the plan!”

On her future with Get Rowdy:
“Well, he is actually going to be looking for a new home. [Kyra Russel] would like to take more of the jumper route, and I know she knows she has a nice hunter, so I think she’s planning to move him on to someone else that will enjoy him in the big hunter classes and the derbies. I’m going to continue showing him here [at Desert Circuit], there is another derby here Week VII, and we will; see where it takes us this year.”

On the division:
“He was quite good. The first round he was like, ‘Oh, these are bigger jumps again. I remember these!’ We didn’t get a great score for the first round, but then we won the handy round. He’s always very good in the handy. He loves the handy turns, the excitement of the handy turns and he is great at the trot fence horse. He’s just really fun to turn and burn a little bit because he doesn’t get too fast at all. He’s very cool. Today was just two nice hunter rounds; the jumps were a good size and the courses were built nice. I thought they flowed well and there were some long lines. It was a good course.. He ended up winning the second round today as well. I was happy with him, he was really good. I just want to thank Kyra Russell and Teton Farms for the opportunity to ride him, and a big thank you to Meadow Grove Farm as well.”

On DIHP:
“They have made a lot of really good changes. They’ve put in a lot of effort to make it nice, the landscaping is impeccable. They really just stay on top of it. The hunter rings all look beautiful. The [Grand Prix Arena] looks really cool with it basically being enclosed all the way around. It looks more European than it used to and that is really fun. I think around the property, they’ve done a great job of just keeping everything clean, nice and watered down. I know that dust can get kind of bad out here because we are in the desert, but their crew has been really on it about keeping everything wet. It’s just been really nice to have, to see such improvements on a facility that’s now been here for awhile. It’s really fun to have the trees actually looking like palm trees now, it’s just really fun to see it just grow. The VIP is great and it’s nice to be here. I enjoy the circuit here in the Desert Horse Park. I really enjoy the Grand Prix Arena footing. I wish they would do that with all the rings, because it is really nice! They never have to water, the underground water system is just so cool.”