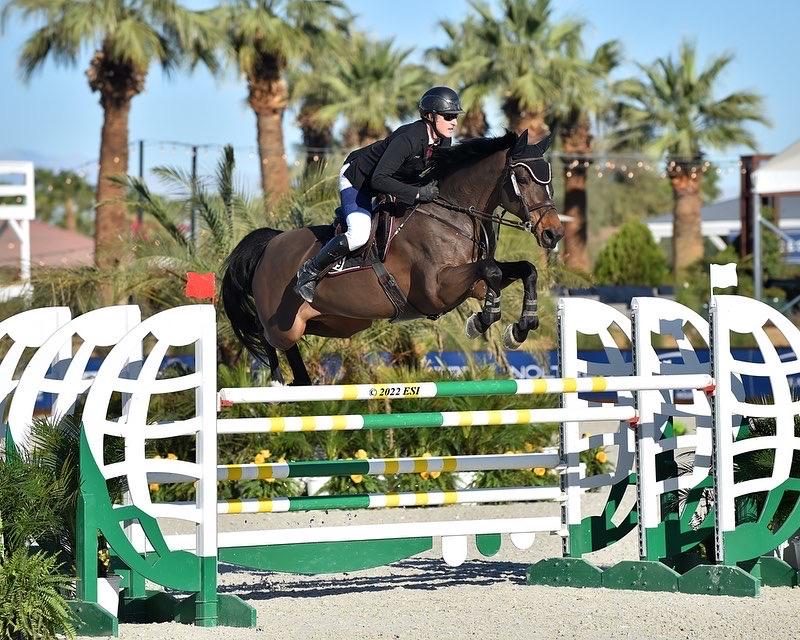 Thermal, Calif. – Feb. 13, 2022 – The fourth week of the Desert Circuit concluded on Sunday with the  $15,000 1.35 Open Classic, sponsored by Brown Advisory, in the Grand Prix Arena. A total of 2Hi 6 entries came forward to contest the Olaf Petersen, Jr.-designed track. Five horse-and-rider combinations advanced to the tiebreaker, but in the end it was Australia’s Harley Brown and Forever Alve that produced the fastest double clear round to claim the winning honors.

Petersen’s (GER) course consisted of 13 obstacles, including a triple bar, an oxer-vertical double combination, and the technical final line that featured an oxer-vertical-vertical triple combination going home to the final oxer. Only five pairs managed to complete the first track without error and advance to the short track, which had one new fence as well as the double combination before athletes rolled back to the last line, an oxer with a bending line to the final delicate vertical at the far end of the ring.

Brown was the pathfinder during the jump-off, posting the first clear round and wearing a target on his back after crossing the finish line in a speedy 40.590 seconds that would prove uncatchable with Forever Alve for owner Emma Catherine Reichow. Shawn Casady tried to catch him with Ekstra MF, owned by Rabbit Root Stables LLC, but in their effort to leave all of the fences intact the duo was too slow and stopped the clock in a clear 43.163 seconds for second place. Devi Ferreira rounded out the top three with Ixchel Mosley’s Siegfried 68 as the fastest 4-faulter. The duo broke the beams in 39.554 seconds, just ahead of Brown, but their speedy round came at the expense of a rail, while Brown led the lap of honor. Forever Alve, a 12-year-old KWPN mare, also shows with her owner Reichow in the High Amateur Jumpers and the U25 division. Reichow handed the reins over to Brown, her trainer, while she studies finance at the University of Georgia and rides on their equestrian team. While she does try to return home to the west coast as often as she can to compete her own horses, her busy school schedule has allowed Brown to compete her horses in special classes like this one, continuing to get to know her top mounts and help her advance with them once she’s back in the saddle.

On the course and his plan:
“I thought the course was great. Olaf is a wonderful builder and I love jumping his courses. For the jump-off, when I went, there wasn’t a clean horse in the jump-off. She’s got good leg speed anyway; she’s quite quick. I thought I’d do all the turns and there were a couple of places where I left the door open a little bit. If someone had wanted to they could’ve beaten me but they didn’t. I was lucky enough and I held off and I won. Yay!”

On taking over the ride on Forever Alve:
“[Her owner] Emma is in college. She rode the horse the first week and did the Grand Prix on her and did pretty good. She’s coming back from an injury so it’s a slow process but she’s starting to get her straps and she’s a really competitive mare. Emma’s been really successful on her – silver medal at Young Riders, gold medal at Prix de States – but then the horse unfortunately got injured. She’s represented America, too, on the Young Rider team. She’s coming back and we’ve got high hopes that she’ll come all the way back. We’ll bring her back for weeks VI, VII and VIII. There are some national grand prixs and Emma will hopefully be beach week VIII, but we’ll progress her along and step up to bigger stuff.”

On Forever Alve:
“I got her in the fall of 2018. We imported her from Europe and we’ve since been moving up. She was at the end of her 8-year-old year when we bought her and it was my last junior year, so I showed her in all the junior jumpers and we actually won Prix De States that year. Then in 2020 everything slowed down so we didn’t do much showing. She’s just getting back into the grand prixs. She jumped the Grand Prix the other day and did this class today and was really good. We’ve been stepping back up. She’s hopefully going to be my next grand prix horse which is really exciting. She has such a big heart. She really wants to win every time, which I love. And I really, really love mares. Once you have a good mare they’re unbeatable in my opinion. She also has a lot of scope and she’s also quick which I think is special in a big horse. She has the ability to do well in jump-offs and is a very competitive horse.”

On watching her trainer, Harley Brown, show her horse:
“It’s very helpful watching him ride her. He’s been showing all my horses to keep them in shape. Last year I didn’t get the chance to come show mostly because of COVID and being on the equestrian team here [at Georgia], so he showed my horses a lot and he figured out a lot about them which was really helpful for when I came back. It’s great getting a different perspective on them because it’s so different from when you’re riding them. You feel different things and seeing someone else ride her and my other horses is really helpful for me. And for them too, honestly.”

On balancing riding and school on multiple coasts:
“Competing has definitely slowed down a little bit. I’m on the equestrian team here [at Georgia] so I get to ride and do more meets with the team, but I don’t get to come home and show very often which is definitely a big adjustment but I’m only in college for four years and I have the rest of my life to do this so that’s the perspective I’m taking on it. Over the summer I came home and I did a bunch of shows, and I came to DIHP for week II a couple weeks ago. I’m going to try to come back hopefully week VIII and some other shows in the spring.” DIHP: How did you get into riding?

Mika: I got into riding from my sister, Aya Clear. She started when I was younger and I kept going to shows with her and I was like, ‘Why not just try it out?’ Now I just love this sport.

DIHP: What makes horses so special for you?

Mika: The connection that you make with them is so amazing. They’re such amazing creatures and I just love them so much.

Mika: That’s a hard one. Probably this class. Last week I actually fell off on the same horse I won on today, so I really felt like I redeemed myself and I’m really proud of her and our connection we had together.

DIHP: Tell us about your horse.

Mika: This is my horse Celina Z. We just moved up to the 1.20s last week and I also have another horse named Mr. Pancake BH and I also started the 1.20m with him this year.

Mika: This is one of my favorite horse shows. It’s so pretty. They did such a good job with this venue and it’s a horse show I always look forward to.