Haness Has His Heyday in $100,000 WCHR West Coast Hunter Spectacular 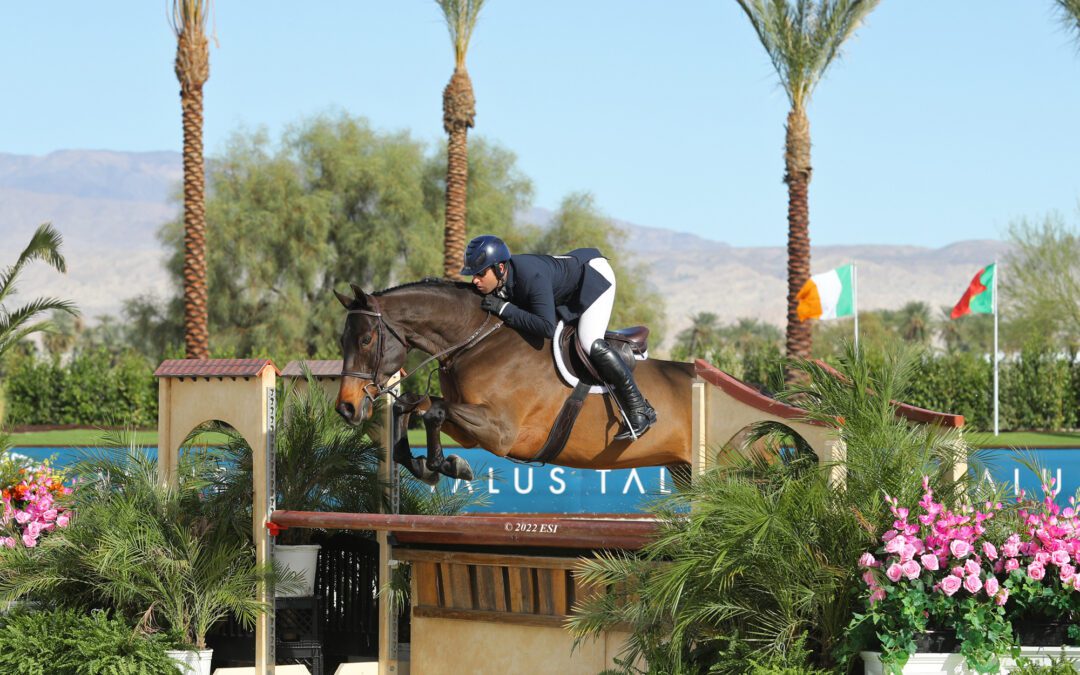 Nick Haness has been racking up top results nationwide, and he added another major victory to his belt Friday evening as he secured the win in the $100,000 WCHR West Coast Hunter Spectacular aboard Lindsay Maxwell’s HH Elmo.

“He used to be a jumper,” Haness, of Temecula, CA, said of his partner, a 13-year-old Dutch Warmblood (Verdi x Padinus). “He was a grand prix horse in his previous life and converted to being a hunter, and Lindsay Maxwell shows him in the Amateur-Owner Hunter division as well. We’ve been showing for about two years together now and he has done some derbies, we’ve shown on the East coast with him. He’s been a spectacular partner and a horse that wants to come in and win every time.” 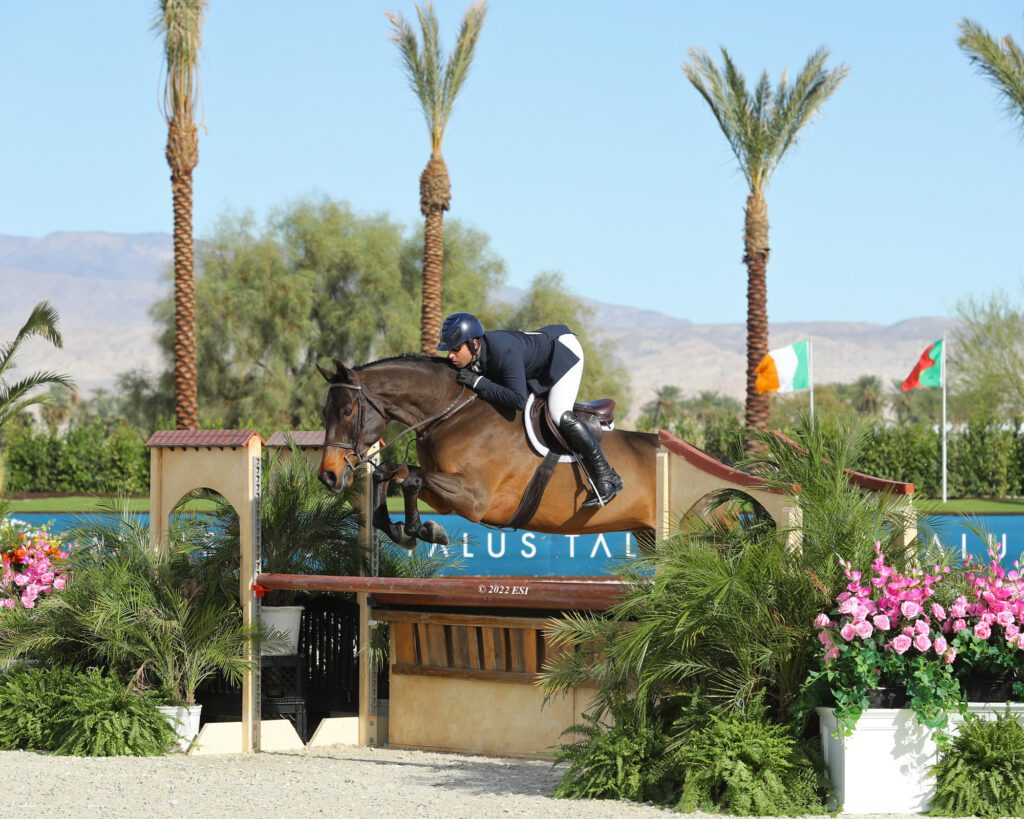 The pair led wire to wire, jumping fabulously over round one in the Grand Prix Arena to a score of 89, taking the lead and holding it as the top 12 were invited back for the evening portion and handy round of the event.

Last to return, Haness knew the stakes were high but he had some points to spare. Leaving nothing to chance, he took all the risks he could and was well rewarded with high scores yet again, earning a 91.5 for round two and a 180.5 two-round total. HH Elmo felt the electricity and atmosphere in the Grand Prix Arena Friday evening. He walked into the arena and whinnied before taking to his business. “He comes in and lets the crowd know that he’s here to party and here to win,” Haness explained. “I was just here to be his partner tonight and let him do all the special jumping.

“He’s just been phenomenal to ride and always gives a 10 out of 10,” Haness remarked about HH Elmo. “He’s so much fun, very brave, and obviously very scopey with the jumper background so this is a fun stage for him to demonstrate all his talents.” Haness is no stranger to the winner’s circle no matter where he competes. Not only has he won countless events at DIHP, but he also claimed the WCHR Professional Finals on the East Coast in October. Returning to his home state of California, he has his eyes set on increased prize money.

“I think the team at Desert Horse Park does an incredible job raising the bar for the West Coast,” Haness said. “As someone who’s traveled around the country many times showing and on the East Coast at really nice venues, California has really raised the bar here at the Desert International Horse Park and I just applaud the team here and everyone that is a part of this team. “The prize money in Thermal throughout the rest of the season and into next year is just incredible. From national derby level, international derby level, classics, and all these fun classes in between, there’s a lot of opportunity for people and horses at every level to come here and have a shot at winning some nice prize money,” Haness concluded.

This week is just the beginning of countless opportunities for the hunters to shine. During National Sunshine Series week two, hunters will take on the $65,000 USHJA International Derby Regional Championships, and hunters are invited back in March to contest a second $100,000 WCHR West Coast Hunter Spectacular during Desert Circuit IX. Haness aims to be back in that winner’s circle again before the season is over.

For Jenny Karazissis, Friday morning’s $5,000 Ritz Carlton Rancho Mirage USHJA National Hunter Derby – Open felt like coming home on her veteran partner Really, owned by Michelle Cobb. After a two-year hiatus for the 13 year-old Warmblood gelding, Karazissis chose National Sunshine Series I at Desert International Horse Park (DIHP) as the place to bring Really back into action. Her decision paid off, as she took the win in Section A of the split class. 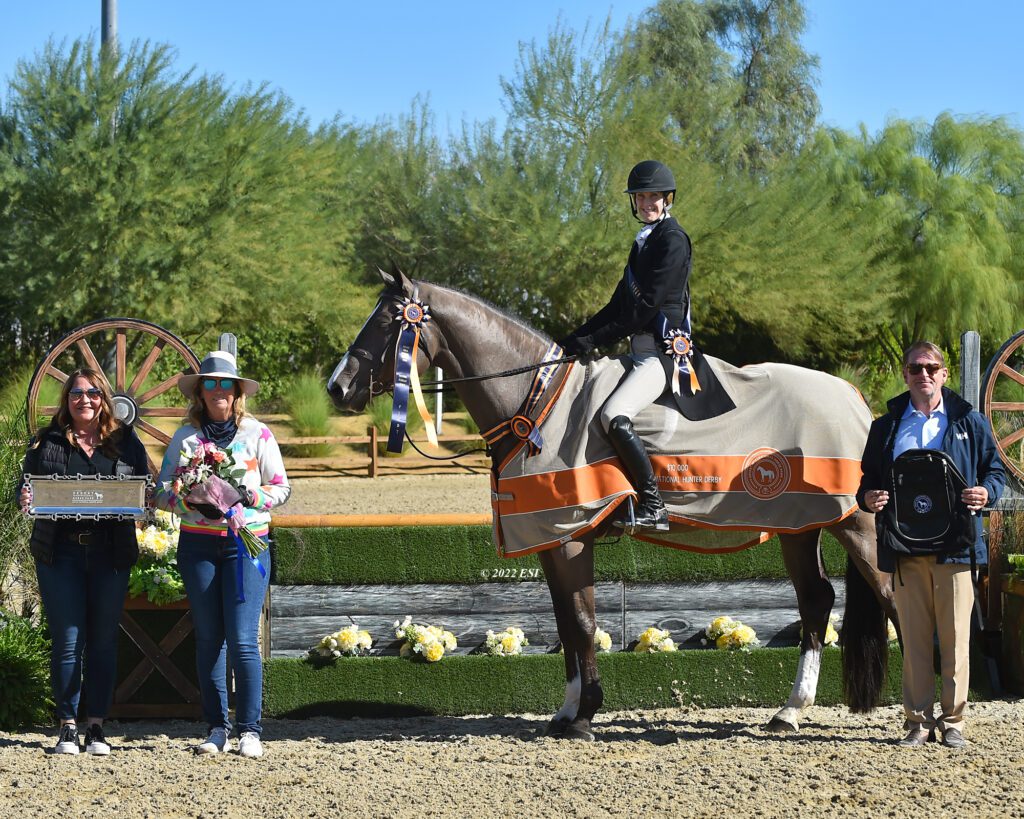 “We have competed quite a bit prior to [his time off] and he’s won a lot of international derbies,” Karazissis remarked “He’s just been a tremendous horse for me. It’s always fun when you get a horse where it feels like family – one that you know so well and have competed for so many years – and then they come back and they’re the same. It’s just like riding a bike again. It’s great.”

Karazissis felt confident heading into today’s class, relying on Really’s impressive scope and natural handiness and even felt good enough to make a bold move up to the last fence in the handy round.

“I know there’s not a turn that I can’t make [on Really], and to be able to have that long-approach hand-gallop to the last jump, I just flew and hoped it was there, and fortunately it was,” Karazissis continued. “I like to be more controlling than that but I thought, ‘I need to go for it.’ All the scores at the top were quite close and high.

“I really liked the plan that I came up with because they gave you options to the first three jumps; you could jump it in any direction and it just suited my horse perfectly so I was really confident about that. I just went all out everywhere.”

Karazissis’ bold plan paid off as she led the victory gallop with a total, two-round score of 189. Trailing only slightly behind in second was Katie Taylor-Davidson on Molly Brock’s Charismo with an impressive score of 185.5 and securing third was Hope Glynn aboard Shannon Davidson’s Sartorial with a 184.5.

But for Karazissis, being back aboard Really isn’t the only thing that is reminding her of home.

“Oh my gosh, I am so happy to be here!” she said of returning to DIHP. “We have a place here, so we get to live at home it feels like. The improvements that have been made are tremendous and so is the [prize] money. Everything looks so great and we’re going to be here all the way through March so I’m thrilled.” Following Karazissis’ victory, Nick Haness secured a win in Section B of the $5,000 Ritz Carlton Rancho Mirage USHJA National Hunter Derby – Open. Aboard his longtime partner Reese’s, owned by the West Coast Equine Partners LLC, Haness rode to impressive scores of 95 and 97 for a two-round total of 192. Taking second-place honors was Chelsea Brittner aboard Arvantos with a 191.5 total score. Haness also claimed third place with On Call with a 191 total score.

It was an emotional win for Reuter who has been working tirelessly for this exact moment. “A lot of hard work went into this,” she said. “It’s really nice to have it all come together, so I’m really happy with it. He’s incredible. I love him and I’m very lucky to own him.” Reuter was joined on the podium by Noah Nelson on Leslie Pinkerton Nelson’s Catwoman in second place and Eden Patron aboard Cassifino X in third.