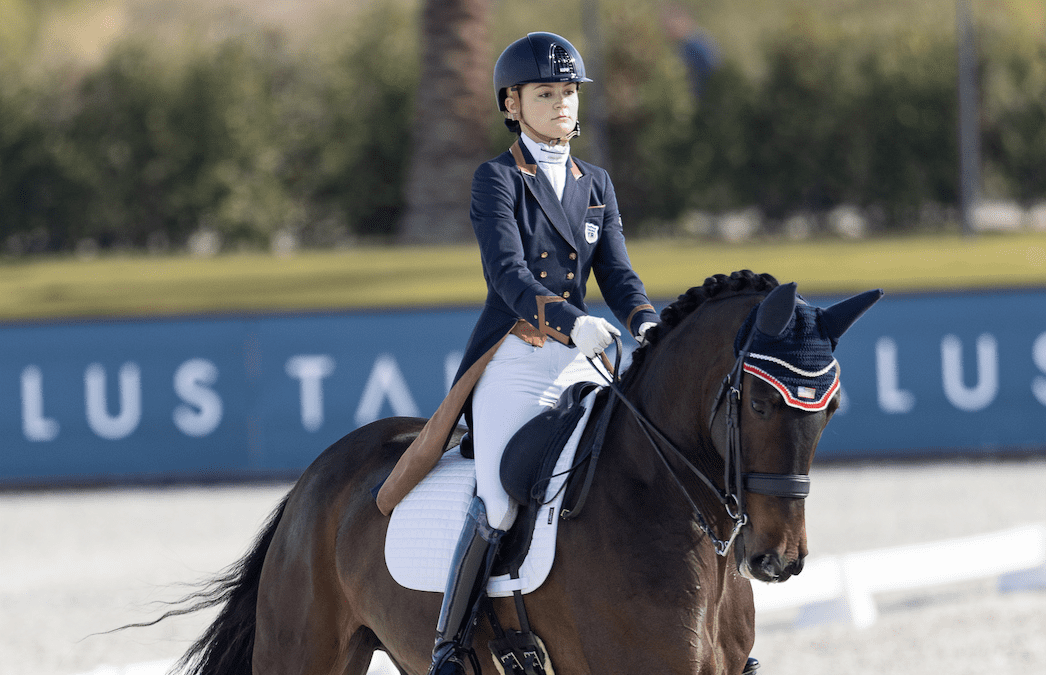 “It was a great weekend,” Nichols reflected. “We had two personal bests in the Young Riders and we had a really good freestyle this morning. It was my debut first ever time competing at the U25 with Elian. To have three judges over 70 percent the first time out was super exciting. I’m always learning and getting more experienced getting feedback from high level judges.”

On Friday aboard Handsome Rob AR, Nichols, of Yorba Linda, CA, earned a new personal best of 70.838% in the CDIY FEI Young Riders Team, sponsored by Elizabeth Ball. Saturday, aboard Elian Royale, she earned another personal best for the CDIU25 FEI Grand Prix of 67.359% and in the CDIU25 FEI Intermediate II of 69.353%.

Elian Royale is a newer mount for Nichols, but they’ve been progressing well through the levels and debuted at the U25 level during Desert Dressage III. “We purchased Elian in July on the European tour,” she continued of the 13-year-old Dutch Warmblood gelding. “He was trained up to the Grand Prix level showing in Europe. This was our third show together as a pair so we’re still figuring each other out and seeing how he is at the horse shows. Hes’ a new mount but we’ve created a great bond so far.

“I’ve had ‘Rob’ since he was 5 years old and he was doing First Level,” she said of the now 10-year-old Dutch Warmblood gelding. “I brought him up the levels myself with my coaches. We went to the European tour in May and won double gold at NAYC this past year, so it’s been a really awesome year with him. To know I brought him up from the beginning is really special to me.” Nichols is a rider of many talents and she’s put not only her dressage skills to the test at DIHP, but also her jumper skills. “I have been coming to Desert International Horse Park since 2016 at the jumper level. I’ve seen all the improvements they’ve made, and it’s incredible. The environment they’ve created is absolutely gorgeous and it creates such a beautiful background for every moment. I really appreciate them creating such lovely dressage shows in California,” Nichols concluded.

Having CDI competition in Nichols’ home state has been huge in developing her riding at the international level. “It definitely helps with confidence to gain experience, taking every ride as a learning opportunity and thinking about the highlights and how we can improve,” she said of her performance this weekend. “It was a great weekend overall.”