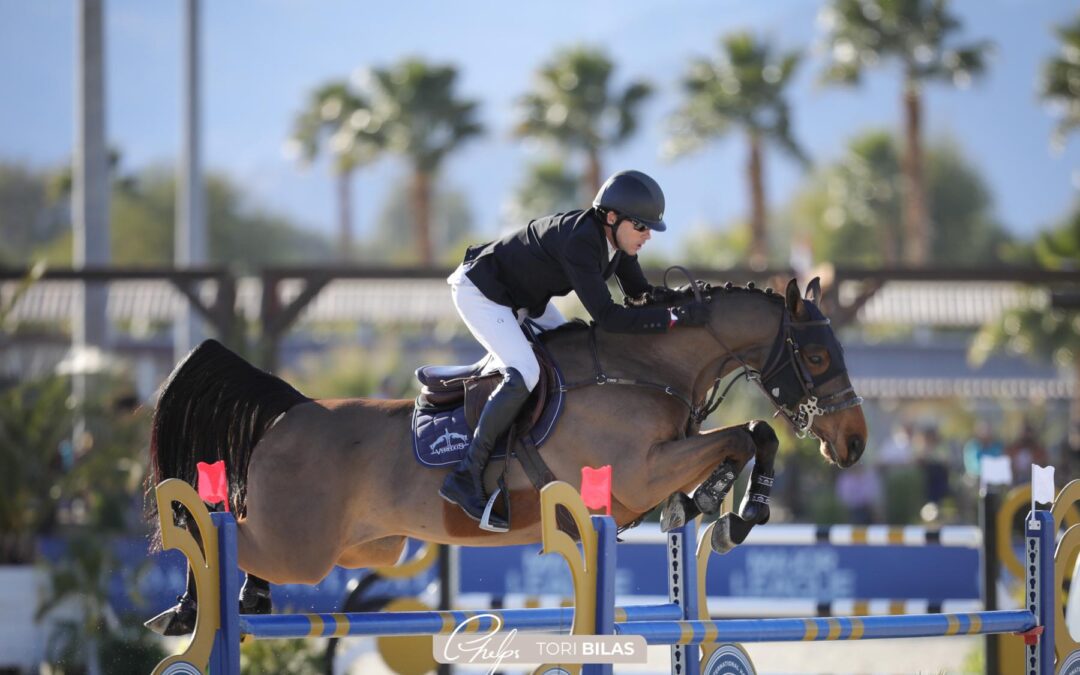 Thermal, Calif. – Feb. 6, 2022 – International competition during Desert Circuit III concluded Sunday as athletes took to the $138,600 Sun Air Jets 1.55m Grand Prix CSI3* to compete for the top prize. Thirty-five elite athletes entered the Grand Prix Arena to contest the track built by Alan Wade (IRL). Though many fell victim to the various challenges presented across the course, a total of 10 pairs navigated the first round clear and took on the jump-off. Ultimately, it was Ireland’s Conor Swail who took the win aboard his own Vital Chance de la Roque. 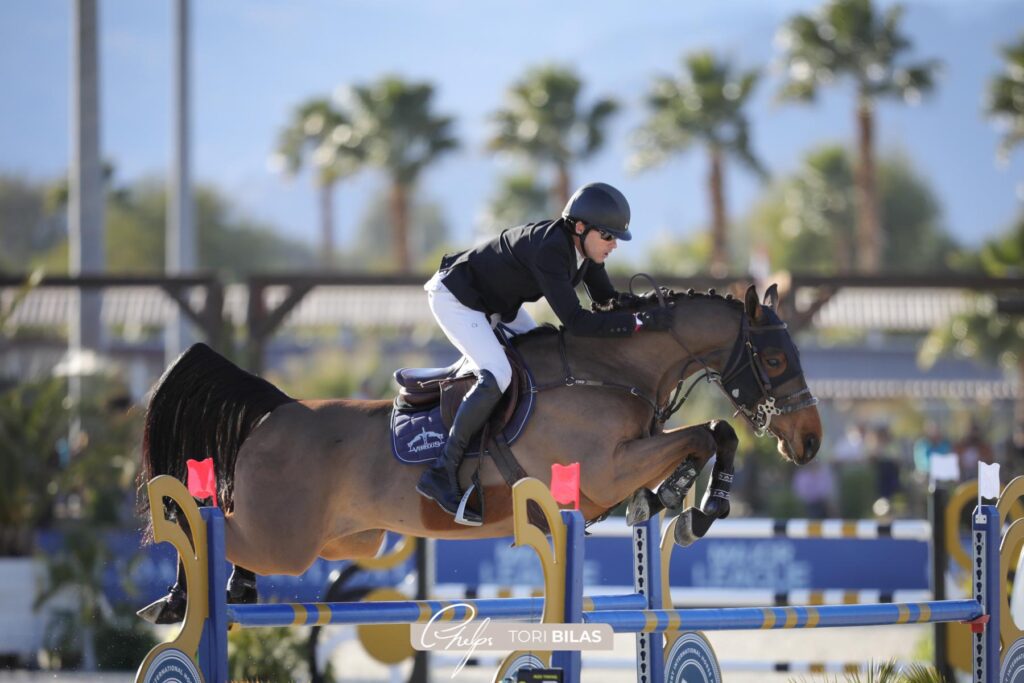 Wade’s course featured 13 numbered obstacles and 16 total jumping efforts, including a vertical-oxer-vertical triple combination, an oxer-vertical double combination, a wide triple bar oxer and sweeping turns through the expanse of the Grand Prix Arena. Canada’s Ali Ramsay produced the first clear effort riding Bonita VH Keizershof Z as the fourth to tackle Wade’s challenging track. A tie-breaking jump-off would be guaranteed just two rounds later when Sophia Siegel and A-Girl navigated a clear effort. Darrin Dlin (CAN), Karrie Rufer (USA), Keri Potter (USA), Cassio Rivetti (BRA), Lisa Carlsen (CAN), Katilin Campbell (USA), Swail (IRL) and Ramsay with her other mount Lutz would all add their names to the jump-off roster by the conclusion of the first round. The shortened eight-element jump-off set new challenges for competitors. In addition to two new fences not seen in the first round, the track left multiple spaces open for athletes to cut corners and save time on the clock should they choose to take the chance. As the pathfinding duo for the jump-off, Ramsay and Bonita VH Keizershof Z suffered two unfortunate rails, leaving the door open for her fellow competitors. Immediately following, Siegel found her way to the first double-clear effort of the class riding her own A-Girl, crossing through the timers in 43.12 seconds to set the standard for the remaining eight competitors. As the winning pair in Thursday’s $5,000 Pomponio Ranch 1.40m Two-Phase CSI3*, the pressure was on Rufer and the Morning Star Sporthorses, LLC, entry Mr. Europe to perform. The duo rose to the occasion, shaving an impressive seven seconds off of Siegel’s time to claim the top spot in a swift 36.72 seconds. Dlin, Potter, Rivetti and Ramsay aboard her second mount Lutz would all fall victim to four faults, with Campbell taking home eight faults and Carlsen piloting Livestream 2 into the second place position narrowly behind Rufer after putting down a clear round in 37.79 seconds. Lisa Carlsen (CAN) and Livestream 2

As the final pair to contest the jump-off track, Swail and his notoriously quick mount Vital Chance de la Roque saved the best for last, putting on a show for the crowd gathered around the Grand Prix Arena. The 13-year-old Selle Francais gelding showcased his skills, galloping his way through the tactful turns with ease and remaining careful over each fence. In what seemed like a photo finish, Swail and Vital Chance de la Roque notched 36.53 seconds on the clock, just good enough to claim first place honors. Rufer and Mr. Europe would ultimately finish in second place, with Carlsen and Livestream 2 rounding out the top three. Earlier in the day, 40 horse-and-athlete combinations vied for top honors in the $15,000 Prestige Saddlery 1.35m Open Classic. Just nine pairs were able to navigate a clear round over the first course in order to advance to the shortened jump-off track. Coming off of a win Saturday evening in the $25,000 FarmVet Grand Prix riding Stern Dei Folletti, Rufer entered the Grand Prix Arena with confidence aboard Morning Star Sporthorses, LLC’s Mai Tai 2, hungry for yet another top finish. The duo claimed first place with more than a two-second lead, riding to one of only five double-clear efforts in the class to finish in 35.49 seconds. Second place was awarded to Swail and Ikonic PB, owned by Vanessa Mannix, for their time of 37.614 seconds. Rounding out the top three, fellow Irishman Robert Blanchette piloted RTS LLC’s Chardonnay to a time of 37.882 seconds.

On the jump-off:
“Going through my round with [Vital Chance de la Roque], I tried to have a very high canter to the first fence, so I was able to leave out a stride between fence one and two. I got the seven strides nicely. Then it was a big gallop over to fence three and, again, you’re just running over and trying to not take too much speed off and get a good shot there. Then, when we jumped the third fence, we did the rollback to the double. I slowed the canter down a little bit and made sure I didn’t get the back rail going into the double, and a nice one stride. It was a little bit easy in the six strides. I felt that was a better option for me just because the left turn with Vinny is a little more difficult. So I did the easy six strides. We rolled back, had a nice turn and rode up in the seven strides, which is a leave out to the last. I did feel like that was hopefully going to be enough.”

On Vital Chance de la Roque and his hind end:
“I feel like he had nearly too much back end today in the jump off. For some reason, it was nearly too much. I think it was over extravagant. We’re able to use different back boots. The laws are getting tighter all the time but, again, he doesn’t need very much to make the back end work well. We have that schooled or trained before we come to the competition. He jumped amazing. I don’t need to keep saying how great he is. If you just read his results, that shows for himself. It was a nice win. We were last to go. The time was very hard to beat. Karrie [Rufer] put up a very fast time. But I did feel if I did what we just explained, I would maybe just make it. So, thankfully, today he had a great round.”

On giving a treat to his horses before entering the ring:
“I always try to give them something going in as well. I want them to feel comfortable going into the ring as well as coming out of it. It’s just something that I do where I make sure you’re past the in-gate and whoever I’m riding gets a little cookie before we start. I think it sort of helps them feel more relaxed when we come into the ring. It is the same when you finish and come out of the ring. They’re always looking for something, which is nice as well.” Hear from this week’s Weekly Winner, who took top honors in the Amberway Equine .75 Non Pro Jumper Classic, Sadie Wellman!
How did you get into riding?
Well my dad has always been an owner of racehorses, so I’ve always been around horses my entire life.
Tell us about this horse, HD Ginger Flame:
This is actually my third day showing her. We’re just leasing her this week, but we could tell that she’s very sweet and forgiving.
What’s your best memory while riding?
Probably at this horse show last year called Champ Show. I was champion and reserve champion with my pony. I had some struggles with my riding; I kept forgetting my courses and it was just a hard year. So getting champion felt really nice to get a good win.
What do you think of DIHP?
This is my first time here. It’s so pretty; I love it.