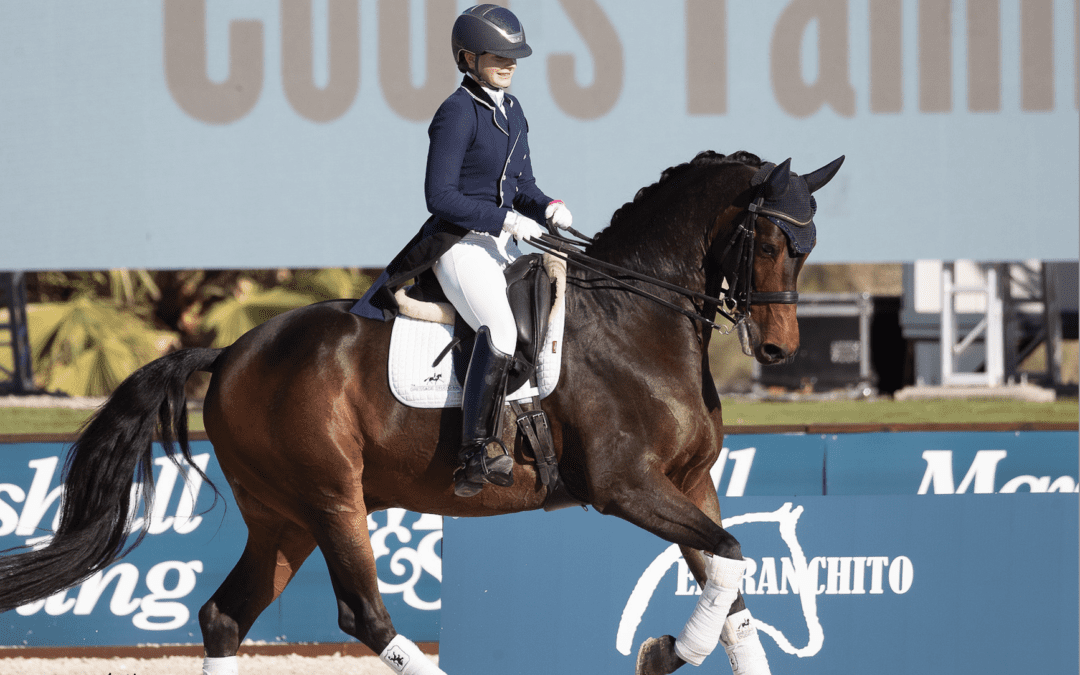 Claire Robinson went a year and a half before she could really nail the flying changes on her horse Glamour Boy. It was love at first sight for Robinson’s mother, Carol, so the U25 competitor came home with the horse, who Carol owns, in 2018.

“He was the sort of horse that we didn’t mean to buy him when we went to the stables looking,” said Robinson of the 11-year-old gelding (Bojengel x Jazz). “They pulled him out and my mom took me by the arm and said, ‘If you don’t like this one I will get him.’ He was so beautiful and wonderful. There was something about him. I couldn’t get a single flying change on him which was very humbling. He had a really cool feeling so we brought him back.” “It probably took a good year and a half,” Robinson, 20, remarked about Glamour Boy learning his rider’s aids for flying changes. “The changes are always the biggest struggle and I’m thankful to have had some amazing coaching from Pia Fortmuller, who was in the Grand Prix division this week. She really gets him as well, so we’re getting his confidence up. If you go and kick him it doesn’t help, so you have to feel the right moment, get him confident, and that’s been the biggest key. You can’t go full Alberta redneck and start kicking!”

Robinson has learned so much from Fortmuller and from her partner Glamour Boy, but above all she continues to laugh along the way as she gets to know the horse more and more. “He’s such a character,” she continued. “If you leave the stall door open for a moment, he pulls everything off the shelves, his wraps are off, and his blankets are on his head. We have to dress him in one of those compression blankets; we call it his ‘Superman Suit.’ He’s like a little kid; you have to dress him up in his outfits so he can fight the monsters all night long.”

Fighting monsters has been the least of the accomplishments Robinson and Glamour Boy have made over the past few years together.

“Ever since I was a kid, my dream has been to do the Grand Prix. He’s just made my dream come true,” Robinson said. “This is our second competitive season doing the U25. I’ve learned so much from him. To bring him along from 7-turning-8 has been a journey for sure. I feel like the past year is the first year I feel like we are getting it and getting strong.”

Robinson and her team plan to stay in the desert for the remainder of the 2022-2023 season for more dressage events. “The improvements they make every year are amazing; it’s like coming to a different facility every time we come back,” she concluded. “It’s for sure my favorite show. There’s something about that ring that is so magical with the lights, the tents, and the atmosphere. The footing is great, the stabling is super bright, the staff is really wonderful, and it’s just a fantastic place to show.”

Six High Point Awards were given throughout the weekend. All High Point Winners were awarded a full set of DSB Sports Boots from Custom Saddlery, graciously given by sponsor Elizabeth Ball Dressage, along with her sponsorship and support of the Desert Dressage Series.

The overall High Score of the National show at Desert Dressage II was Steffen Peters and Be Happy, with a score of 79.865%. The pair now holds the lead for the National Circuit Award, to be given at the close of the season to the top-performing horse-and-rider combination from all five national shows during the 2022-2023 season. Steffen Peters and Be Happy. Photo by Terri Miller