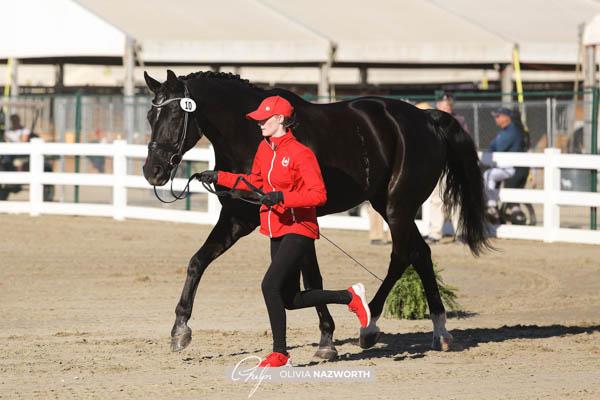 Thermal, Calif. – Feb. 17, 2022 – Dressage competitors returned to the Desert International Horse Park (DIHP) Thursday, Feb. 17, for the third installment of the Adequan® Desert Dressage CDI3* and CPEDI3*, as well as the Adequan® Desert Dressage III National, which will begin classes Friday, Feb. 18. Top west coast riders and their horses, including Tokyo Olympic Games silver medalist Steffen Peters and Suppenkasper, will battle it out for division honors at the beautiful desert location through the weekend. Adequan® is welcomed back as the title sponsor of the Desert Dressage Series, which continues this week with Desert Dressage III featuring CDI3*, CDI1*, and CPEDI3* classes, as well as qualifying classes for the 2022 FEI North American Youth Championships and the 2022 USEF Festival of Champions.

The jog for the Adequan® Desert Dressage III CDI3*, CDI1*, and CPEDI3* took place on Thursday afternoon with all participants passing the health inspection with flying colors. FEI competition will begin Friday at 11:40 a.m. with the CPEDI3* Para Team Test kicking off the day in the scenic venue’s International Arena. Friday’s highlight event, the CDI3* Grand Prix, will begin at 4:00 p.m. in the International Arena. In addition to the CDI competition, dressage riders of all levels will be competing throughout the weekend in the Adequan Desert Dressage III National Show. Fourteen starters will kick off the national competition Friday morning with the Prix St. Georges, taking to the International Arena at 7:40 a.m.

Results and time schedules for the week can be found at Foxvillage or on Equestrian-Hub.