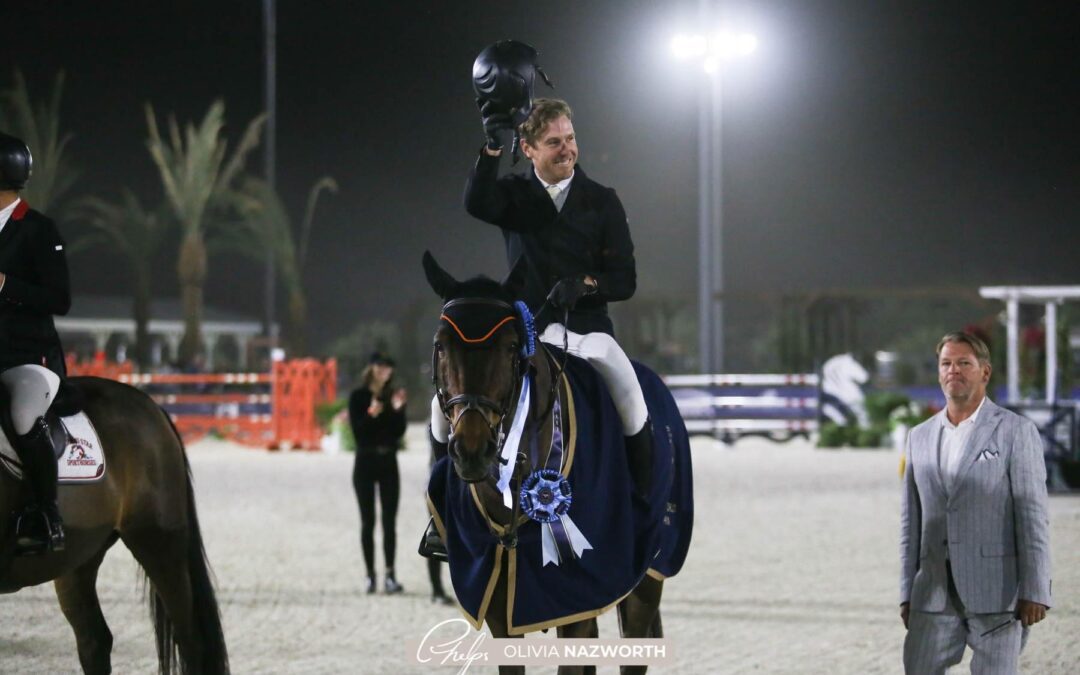 Thermal, Calif. – Feb. 12, 2022 – All eyes fell on the Grand Prix Arena Saturday night of Desert Circuit IV as top show jumping athletes competed for top honors in the $40,000 Adequan Grand Prix. Under the lights and in front of an impressive crowd at Desert International Horse Park, horse-and-rider combinations tried one by one to navigate the course fault free in order to secure a spot in the subsequent jump-off. At the conclusion of the prestigious class, it was Canada’s Ben Asselin on top aboard Veyron, owned by Attache Stables. 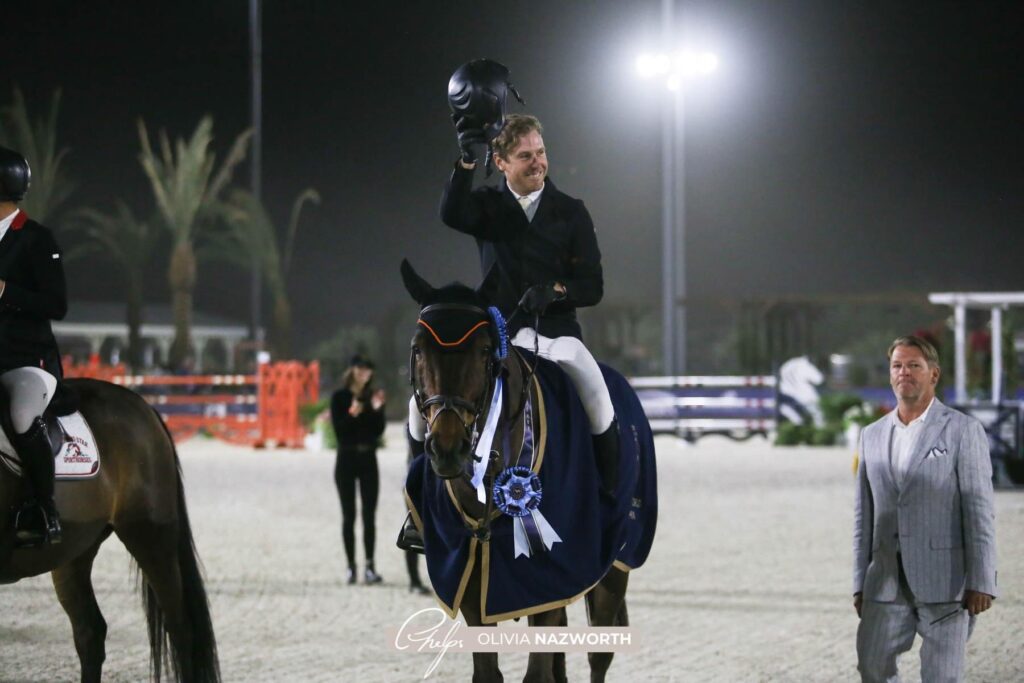 German course designer Olaf Petersen, Jr. set forth the track for the 35 competitors to conquer. His course for the evening presented various challenges, including a triple bar oxer, a vertical-oxer double combination, an oxer-vertical-oxer triple combination, and a tight time allowed of 83 seconds. Rails fell all across the course as the class went on, but the time allowed proved to play a significant factor as six combinations jumped clear over the fences but incurred one or more faults against the clock. Keeping up her incredible clear round streak, Karrie Rufer (USA) was first to clear the course, and she did so in a time of 80.541 seconds aboard the Morning Star Sporthorses entry Stern Dei Folletti, with which she won the $25,000 FarmVet Grand Prix just one week prior. Following suit, Ireland’s James Chawke guaranteed a jump-off immediately following Rufer with a clear round aboard Vanessa Mannix’s Catinka 25. Also securing spots in the coveted jump-off were Kaitlin Campbell (USA) and Asselin. All four clear rounds came early in the order, with no additional pairs jumping clear around the track and within the time allowed after the midway drag break. First to jump off, Rufer and the 11-year-old Holsteiner gelding Stern Dei Folletti cleared the short course in a time of 41.761 seconds, putting pressure on the remaining three entries to keep the rails up and increase the speed even more to dethrone her. Chawke’s time wasn’t far off with the speedy 13-year-old Oldenburg mare Catinka 25, but incurred 4 faults in 42.214 seconds. Campbell pulled off a tricky inside turn, but it wasn’t quite enough, as she crossed the timers in 43.412 seconds, eventually placing her third. Last to take on the course, Asselin and the 17-year-old Oldenburg stallion raced around the track and turned tightly to a time of 41.530 seconds, narrowly edging out Rufer, who took home second place, and claiming top honors for himself. Earlier in the day in the Grand Prix Arena, athletes took their younger mounts into the Interaction Mortgage 10 & Under Futurity Series, which has quickly become a favorite class among show jumpers at Desert International Horse Park. Always a competitive class, this week was no exception, with the top three all double-clear and within one second of one another. Topping the 20 entries over the 1.35m track set by Olaf Petersen, Jr., was Tracey Wade with Happynes, owned by Big Bay City LLC. Second place honors went to Lindsay Linford and Two Smoking, and rounding out the top three was Matt Williams and Interactive Mortgage Tolero 3, owned by DeLong Equestrian Ventures LLC. On Veyron:
“It’s just an incredible horse, and he gave it our all tonight and it was actually the only competition we jumped all week. I pulled him out of the box just for this class, and he really rose to the occasion tonight. So it’s a pleasure to ride him. I’ve ridden him now for about eight and a half years. I know him like the back of my hand. He’s always been a very, very go-to horse for me in the past, and with him being so seasoned and and his age – he’s 17 years old – I like to pick and choose the competitions to jump with him. And I knew that he would just rise to the occasion tonight. He’s not a horse that really needs any warm up rounds or anything like that. He felt the atmosphere tonight and we had a lot of fun.

“Veyron is actually a very, very easy horse. He’s a stallion, but he’s a very gentle stallion. He never really tries to put a foot wrong when you’re on him and he’s so kind to work with on the ground. He can be a little bit spooky here and there, just with people moving around the ring and he kind of gets his eye off those things. But now he’s just so experienced. He knows when it’s time to shine. With the lights on tonight and a little bit of atmosphere with the crowd, he really just rose to the occasion.”

On his partnership with Veyron:
“He means everything. We’ve been all over the world together, jumped on Nations Cups teams for Canada, jumped in five star events across the globe. He’s 17 now, but he still acts like a 7-year-old; he’s still fresh and happy. It’s a pleasure to ride a horse like that when you know him so well. We have such a great partnership together, and I was just so happy with him.

On strategizing with an older horse:
“I think you just have to be smart in your management and not over jump them. Like I said, he knows his job doesn’t need a warmup class, and I know him so well. I know his stride. I know his moves, what he likes and what he doesn’t like. So it was just my job to be focused tonight and just execute the plan that we designed for ourselves, and everything fell into place. Sometimes you have to be a little bit lucky and tonight was our night, I guess. It’s a really special feeling. I think he still has lots of life left in him and I’m excited to continue the year with him in my string and hopefully pull him out for another couple like this.”

On celebrating his win with his family:
“It was awesome. My whole family’s here. My sister’s in the warm-up ring with me. My mom and dad came to watch. My little niece is up in the stands there, cheering. My girlfriend, Taylor, is here and it was just really special that we could pull it off tonight in front of everybody. And so it’s so, so fortunate that I have such a great friend and family group to come and support me.”

On his jump-off strategy:
“To be honest, I really didn’t really see myself being able to win this class. He’s a fantastic jumper and he’s got a monster stride, but he’s got such a lovely, lopey stride so it’s quite hard to make the time allowed on him. So we really had to push for the first round to make the time allowed. We didn’t take any breaks anywhere. And then I saw Karrie [Rufer] go, and she’s had great success all circuit. That’s an incredibly fast and careful horse. So we just tried to leave it all on the table. I think that inside turn to the last double there saved us a lot of time. Mark Kinsella was in the warm-up ring helping me, and he told me that I had to get nine strides down to the last jump. He said, ‘You’ve got to move for seven and just pray that it’s there,’ and that’s exactly what we did. It seemed like it was really far away when we were galloping down to it, but he covered the ground and was able to balance up for the last fence and jumped it clean. It was a great feeling.